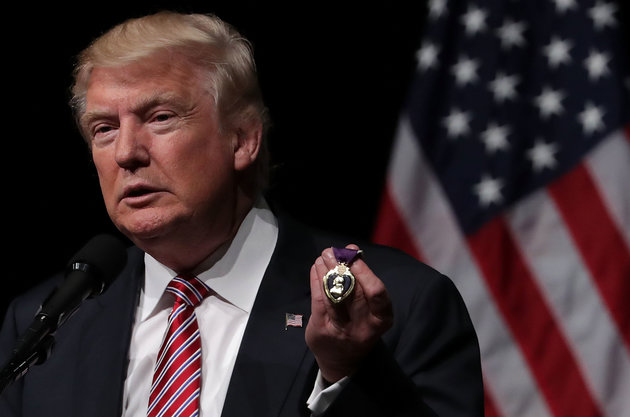 Donald Trump was thrilled last week when a veteran at a Virginia rally gave him his Purple Heart. “I’ve always wanted to get a Purple Heart,” he said, dangling the medal typically awarded to soldiers wounded or killed while serving in battle. “This was much easier.”

That response didn’t sit right with Cameron Kerr, a Purple Heart recipient based in Virginia. As an Army veteran who lost his leg on the battleground in Afghanistan, Kerr was stunned to see Trump treating the prestigious award like a flashy new toy. He figured if Trump has really always wanted a Purple Heart, he should have to earn it “the old-fashioned way”: by going into a war zone.

So he’s raising money to help give Trump that chance.

“As with seemingly everything else in his life, Mr. Trump got [a Purple Heart] handed to him instead of earning it,” Kerr states on a GoFundMe page he launched Tuesday with the headline “Help Trump Get A Purple Heart.”

“I fully endorse his desire to earn one and would happily oblige his interest in doing so, by being one of the first to chip in to fly him to the conflict zone of his choosing,” Kerr wrote. “After all, you’re never too old to follow your dreams.”

As with seemingly everything else in his life, Mr. Trump got [a Purple Heart] handed to him instead of earning it.Cameron Kerr, Purple Heart recipient

By Friday afternoon, Kerr had raised $6,750. He told The Huffington Post he never expected to raise any money, other than maybe $100 from sympathetic family and friends. Then again, he said he saw a lot of people around him ― including vets he knows who support Trump ― whose “minds were blown” by the way the real estate mogul diminished the Purple Heart.

“It was the actual callousness of him saying, ‘I’ve always wanted one. This is much easier,’” Kerr said. “There was kind of this revulsion of him making light of something people literally have to bleed or die for. Not understanding that gravity.”

Beyond his anger at what was happening, Kerr said his “dark sense of humor” compelled him to create the fundraising site. “To me, it was partially, ‘How do we ridicule this insensitive, callous statement?’”

A Trump spokeswoman did not respond to a request for comment.

Trump never served in the military ― he deferred the draft five times during the Vietnam War. He’s also facing universal criticism for his attacks on the family of a Muslim American soldier who died in Iraq while protecting his troops. For all his outrageous comments, it’s Trump’s insults directed at a Gold Star family that appear to have crossed a line.

Military vets in Congress have since urged GOP leaders to revoke their endorsements of Trump, and a group of vets crashed Sen. John McCain’s officethis week, urging the Arizona Republican to do the same.

Kerr, who now works as a security analyst, knows Trump isn’t likely to take him up on a fully paid trip into a war zone. So, as he spells out on his fundraising page, he plans to direct any money he raises to a cause that Trump deeply opposes: aiding Syrian refugees. Not only did Kerr study Arabic and Middle Eastern history in college, he has worked directly with refugees from the region and knows the hell they have to endure to escape the violence of their home countries.

“They are much better people than Donald Trump,” said Kerr. “They’re so focused on how they can contribute, they’re so motivated. It’s especially poignant to help them because it’s a group that he has slandered as terrorists, when in fact, every time, if his people reached out and met a refugee, they would realize this person is awesome.”

What if Trump becomes president? Kerr joked that he’ll probably end up on a no-fly list because of his open opposition to “everything this guy stands for.”