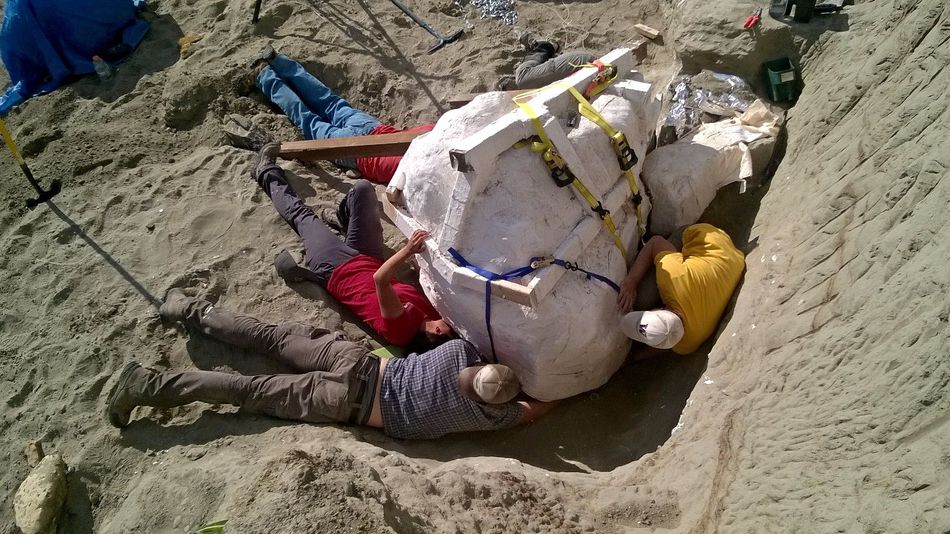 In the rocky hills of what is now Montana, a Tyrannosaurus rex once lumbered across the land, standing as high as 20-feet tall and stretching up to 40-feet long.

Some 66 million years later, a team of U.S. paleontologists have unearthed its skull, making an extremely rare find for the realm of dinosaur fossils. The 2,500-pound boulder of a bone traveled west this week to Seattle, where it arrived at the University of Washington’s Burke Museum of Natural History and Culture.

“The combination of the skull features, the size of the bones, and the honeycomb-like appearance of the bones tell us this is a T. rex,” Greg Wilson, the museum’s adjunct curator of vertebrate paleontology, said in a media release on Wednesday.

“This was a very exciting moment for us,” he said.

Wilson led a team of more than 45 people who helped excavate the dinosaur fossils over the course of a month this summer.

Luke Tufts and Jason Love, two paleontology volunteers with Burke Museum, were searching for signs of fossils in the Hell Creek Formation when they encountered a large scattering of bone fragments at the surface of the sandstone. The 4-foot-long skull featured a keyhole-shaped opening that paleontologists said was unmistakably the squamosal bone of the enormous carnivorous vertebrate, according to Burke Museum.

“When we started to see those teeth with the skull, we knew we had a fantastic specimen,” Wilson recalled in the media release.

The T. rex is now nicknamed the “Tufts-Love Rex” in honor of the two enterprising volunteers.

Despite the T. rex’s prominent role in our dinosaur dreamscapes, this finding is incredibly rare: Only about 15 “reasonably complete” T. rex skulls are known to exist in the world, the Burke Museum noted.

The Burke Museum team said it successfully shipped the skull, wrapped in a plaster field jacket, to its Seattle location on Thursday.

The public can view the T. rex skull, along with other dinosaur fossils and paleontology field tools, at the museum from Aug. 20 through Oct. 2. The University of Washington plans to permanently display the skull at the New Burke Museum when it opens in 2019.