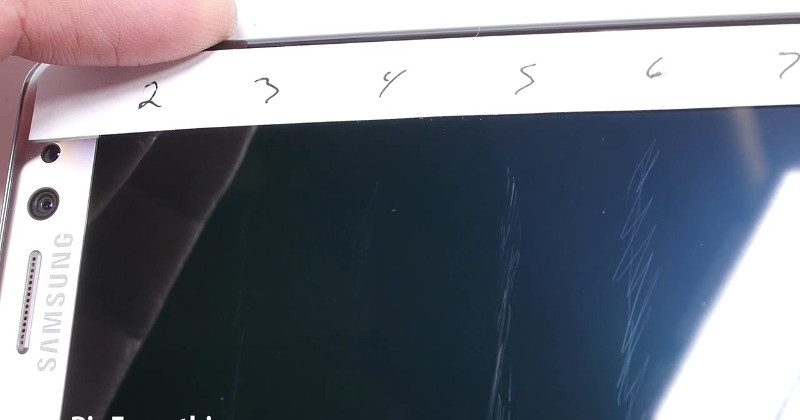 More shatter resistant but not really more scratch resistant. That might be the summary of Corning’s point about the Gorilla Glass 5 when its newest product was put to a test on the Samsung Galaxy Note 7, leaving doubts as to the practical benefits of the new glass material. In a semi-official response to the scratch test, Corning’s execs try to offer explanations for the seemingly disappointing, if not shocking, evidence while, at the same time, not exactly offering assurances to users who might encounter similar real-world cases.

When you advertise a product to be tough as nails, you are just begging for anyone and everyone to really put it to the test. Naturally, JerryRigsEverything, who has become popular for such excruciating stress tests, just couldn’t resist trying out the Galaxy Note 7, the first to bear Corning’s shiny new Gorilla Glass 5. Suffice to say, the results sent the Internet aflutter over the new Gorilla Glass’ perceived qualities. In a nutshell, the glass was perceived to have been scratched by nothing more than a Mohs level 3 pick, whereas the Gorilla Glass 4 only yielded around level 5 or 6. When prodded, Corning does try to clarify some things, though some might find their answers to be a bit dodgy.

Naturally, Corning casts doubts on the way the hardness of the glass was tested, saying it wasn’t a “bona fide industry test”. Of course, that’s technically true, but there are very few independent, third party “bona fide” tests, partly due to inaccessibility of equipment to conduct such tests. One might also argue that real-world accidents that could produce these kinds of scratches are hardly bona fide industry tests either, and yet, in the end, it is what will matter most to consumers anyway.

The company’s execs do also try to explain away the scratches in an interesting way. Those aren’t scratches at all, they say. They are, instead, material transfer. When a material that is softer (the level 3 pick) rubs on a harder substance (Gorilla Glass 5), some of the softer material will transfer over to the harder one. In this case, those “scratches” are actually the picks’ materials left on the glass. That is, according to Corning, the same for all picks up to level 6.

The bottom line of Corning’s response is that Gorilla Glass 5 has been made even more shatter proof than its predecessors by removing flaws from the glass. Not by making the glass softer, which has been the conclusion reached by many based on Jerry’s scratch test videos. In fact, Gorilla Glass 5 only offers scratch resistance “similar” to Gorilla Glass 4, not better.

While Corning does down lay the scratches as material transfer, it will still leave users in a bit of a quandary. Corning itself admits that such metallic material transfers are extremely difficult to remove and may, indeed, seem like scratches. In short, for all intents and purposes, whether scratch or material transfer, for the user, the screen is as good as damaged.