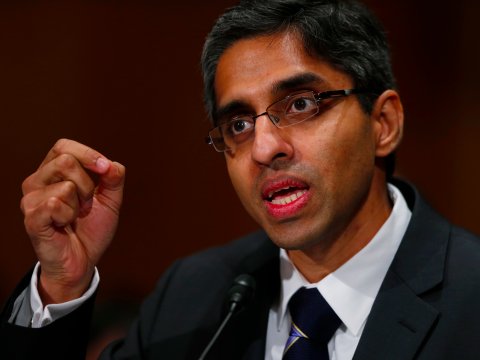 The surgeon general just sent a worrisome letter to every doctor in America published by nherting
Writer Rating: 0
Posted on 2016-09-01
Writer Description: current events
This writer has written 195 articles.

America's doctor just knocked on the doors of every US physician across the country.

On Thursday, US Surgeon General Vivek Murthy sent this letter to 2.3 million American doctors asking for their help to curbwhat's being called an "unprecedented" epidemic of opioid painkiller overdose deaths.

It's the first time in history that a surgeon general has sent a letter directly to American physicians.

This is a major signal to doctors and the public that it's time for something to be done about the thousands of Americans who are dying each year from overdosing on prescription painkillers like oxycodone, fentanyl, and morphine.

Between 2013 and 2014, deaths from synthetic opioids skyrocketed by 79%, according to a new Centers for Disease Control and Prevention report released Thursday.

Since opioid painkillers slow breathing and act on the same brain systems as heroin, they carryserious risks of overdose and, in rarer cases, addiction. But cases that would normally be rare are happening with increasing regularity as the drugs are being given to so many people. Despite being home to 5% of the world's population, America consumes 80% of its opioids.

These drugs are powerful. Fentanyl, the drug that killed Prince, is roughly 50 times stronger than pure heroin. And although the deadly drug is legal with a doctor's prescription, it's also being made illegally in underground labs and traded across the US.

Still, doctors' prescriptions are a sizeable part of the problem.

A 2014 report from the American Academy of Neurology estimates that more than 100,000 Americans have died from prescribed opioids since the late 1990s. Those at highest risk include people between 35 and 54, the report found, and deaths from opioids in this age group have exceeded those from firearms and car crashes.

"As clinicians, we have the unique power to help end this epidemic," Murthy wrote in his letter.

In 2011, 31% of prescription-opioid-related overdose deaths involved these two kinds of drugs used together, according to the National Institute on Drug Abuse. "Unfortunately, too many patients are still co-prescribed opioid pain relievers and benzodiazepines (tranquilizers)," the institute said.