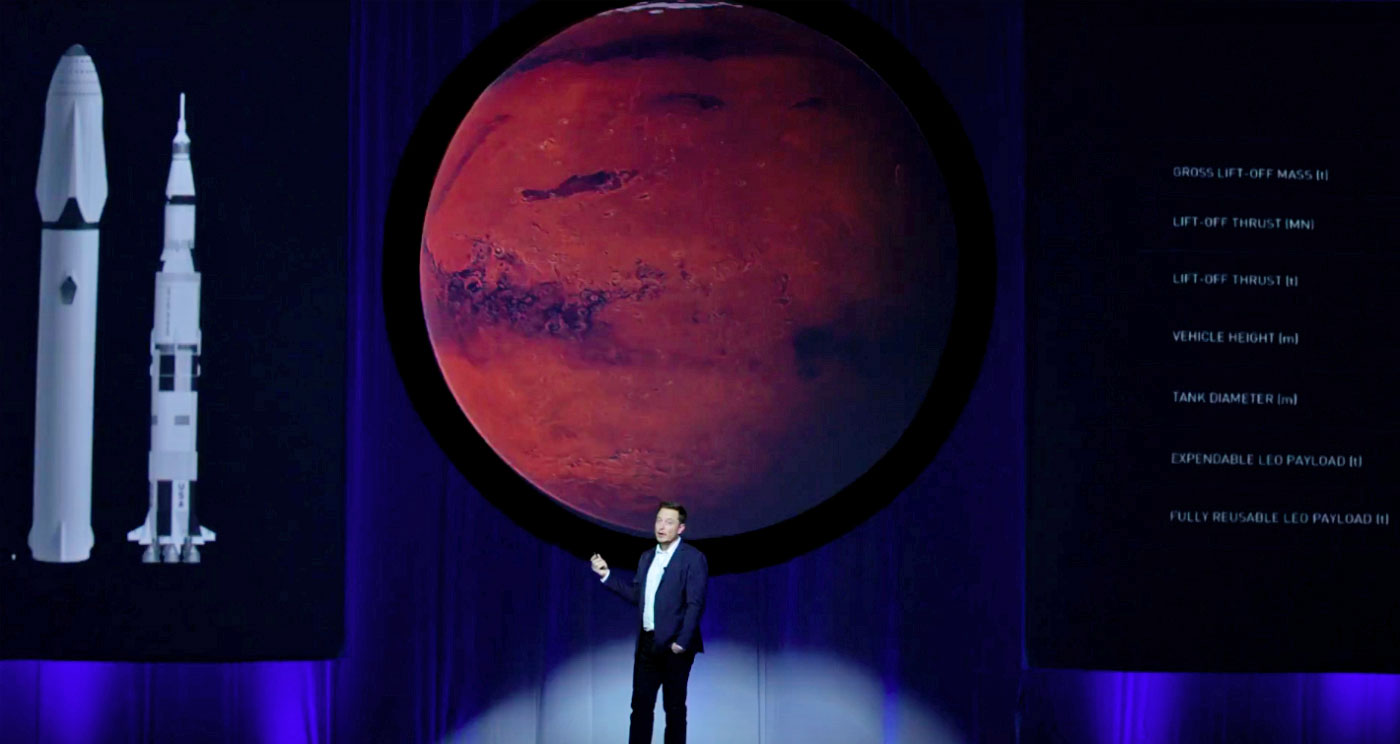 Elon Musk is the man with a vision for a human mission to Mars, and on Tuesday he shared his plans at the International Astronautical Conference in Mexico, with a talk titled "Making Humans a Multiplanetary Species." On-stage, Musk said that there are two paths ahead of humanity: Either stay on Earth and succumb to extinction, or colonize other planets. Mars, he argued, is the best bet for success, considering its proximity to Earth and its similarities to humanity's home planet.

Musk has long toyed with the idea of colonizing Mars. Under the banner of SpaceX, he's previously promised to land an unmanned Dragon capsule on the planet by 2018 and send humans by 2024. For the journey, SpaceX has already built and successfully tested the Raptor rocket engine, a methane fuel-powered machine more powerful than any other rocket on Earth (and, we assume, Mars). Raptor rockets generate roughly 680,000 pounds of thrust, more than three times the amount generated by the Falcon 9.

Raptor engines will propel the Interplanetary Transport System, a ship capable of transporting 100 tons of cargo -- that's supplies or people -- to Mars. The ITS will require 28,730,000 pounds of thrust at liftoff, suggesting it will take roughly 40 Raptor rocket engines to get off the ground. Once it's refueled in orbit, the ITS will deploy two solar arrays that generate 200 kW of power and it will take off for Mars, humans and all.

Musk estimated that, using traditional methods, it would cost $10 billion per person to travel to Mars, and he wants that figure to drop to roughly $200,000 per person. Eventually, the cost of a Mars move will be below $100,000, Musk said. A large part of lowering that cost is creating spaceships with reusable parts, Musk said. The ITS' in-orbit refueling stage is crucial to SpaceX's plans, since it lowers fuel expenditures at liftoff and features fully reusable boosters, tankers and ships. Each booster can be used 1,000 times; each tanker 100 times and each ship 12 times.

Initial trips will take about 100 people to Mars at a time, but Musk said he expected that number (and the size of each ship) to rise in due time. The ITS itself will be a welcoming, fun place, as Musk describes it, featuring zero-gravity rooms, movie areas, a cafeteria and other entertainment options. It'll take just a few days of training to prepare for a trip to Mars, Musk said.

Once on Mars, humans will be able to produce the ITS' methane-based propellant and send the ships back to Earth for re-use, Musk said. This not only lowers the cost of each trip, but it heads off a potential graveyard of spent ships on Mars.

"This is not what it might look like -- this is what we plan to make it look like," Musk said of the ITS explanation video published today.

SpaceX plans to launch a future Mars mission from the Kennedy Space Center. Musk revealed a timeline for SpaceX Mars missions that includes ship, booster and orbital testing beginning in 2018, and actual Mars flights by the end of 2022. The company still plans to send Dragon capsules to Mars beginning in 2018, with the goal of launching additional capsules at a regular cadence, like trains leaving a station.

Musk didn't directly answer how SpaceX plans to pay for its Mars missions, but he said it will be "a huge public-private partnership." There are public and private organizations interested in funding the mission, Musk said.

"Right now we're trying to make as much progress as we can with the resources we have available," Musk said.

SpaceX and NASA have a longstanding relationship -- SpaceX rocketsregularly resupply the International Space Station and NASA is generally supportive of the company's commercial space flight initiatives. However, NASA has its own plans to put humans on Mars, with the #JourneyToMars. That initiative sees humans landing on an asteroid by 2025 and finally touching down on Mars itself in the 2030s. Though Musk didn't get into specifics, a tweet reveals that there's definitely some kind of deal going down between NASA and SpaceX.

SpaceX doesn't only need to explain how it will send humans across the solar system; it also needs to reassure the public that spaceflight is safe. On September 1st, a SpaceX Falcon 9 Heavy rocket exploded on the launch padat Cape Canaveral and the company still isn't certain what caused the fireball. No one was injured, but the blast destroyed a Facebook satellite.

During a Q&A session after his presentation, Musk answered a question from The Verge about deep-space radiation concerns during the trip to Mars. Musk said there was probably a small increase in passengers' chances of developing cancer, but it wasn't something he was concerned about.

SpaceX and NASA are clear leaders in the Mars-colonization market, though other companies are attempting to make the journey as well. Mars One, a one-way Mars mission that will also act as an interplanetary reality show, is still quietly chugging along, but its founders have yet to appropriately address critical questions about the program's viability.