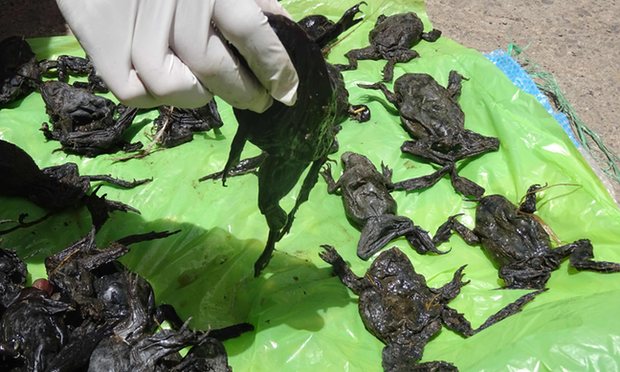 Scientists are investigating the mysterious deaths of at least 10,000 endangered frogs, in a river which leads into South America’s most famous lake on Peru’s border with Bolivia.

The dead Titicaca water frogs were found along a 50km (30 mile) stretch of the Coata river, a tributary which flows into the 8,372 sq km Lake Titicaca, according to Peru’s wildlife and forestry service Serfor.

Researchers are trying to find out what killed the amphibians in such numbers. The Titicaca water frog (Telmatobius culeus) is listed as critically endangered by the IUCN red list on threatened species, and is endemic to the lake.

The world’s largest aquatic frog, weighing up to two pounds, has large folds of skin, which give it a wrinkly appearance – it is jokingly referred to as the Titicaca scrotum frog. The skin increases its surface area so the amphibian can absorb more oxygen.

Roberto Elias, Peru programme manager for US-based Denver Zoo, who has been studying the frog since 2010, said only toxins could have caused such “high mortality so quickly”.

Previous studies had shown high levels of heavy metals in the lake caused by mining tailings from both formal operations and illegal gold mining in surrounding rivers, he said. They include lead, cadmium, mercury, arsenic, iron and zinc.

“Villagers had been cleaning garbage from the river which may have disturbed the sediments,” Elias added, although he stressed post-mortem studies on the frogs had not yet been completed.

Other pollution factors are raw sewage due to a lack of sewage treatment plants and pesticides from agriculture surrounding the world’s highest navigable lake, he said.

Local anti-pollution campaigner Maruja Inquilla Sucasaca, took 100 dead frogs to the main square in the regional capital Puno, to draw the situation to the attention of the authorities.

“No one took the pollution problem seriously until I showed them the dead frogs,” she told the Guardian.

“Lake Titicaca used to be a paradise, now we can’t use the water and our livestock die if they drink it,” said Inquilla, who is vice president of the local committee against the contamination of the Coata river.

“Untreated sewage is being pumped into the lake from the big towns and the authorities don’t care,” she said crying with frustration.

Last October Inquilla accused the mayor of the Coata district of delaying a plant to treat the river water contaminated by sewage emitted by the region’s most populous city, Juliaca.

Pollution is not the only threat to the endangered frog. They are also hunted and eaten in regional dishes or transported to Lima and other cities as part of Peru’s illicit wildlife trade because they are believed to have aphrodisiac properties.

The IUCN red list says the frog has declined in numbers by more than 80% over the last three generations, due to over-exploitation, habitat degradation and invasive species.

Trout, which is not native to the lake, have been introduced and eat the frog’s eggs and tadpoles, says Elias.

“The threat is much higher and the examples of the species we find are much smaller. If this trend continues they could disappear,” he added.