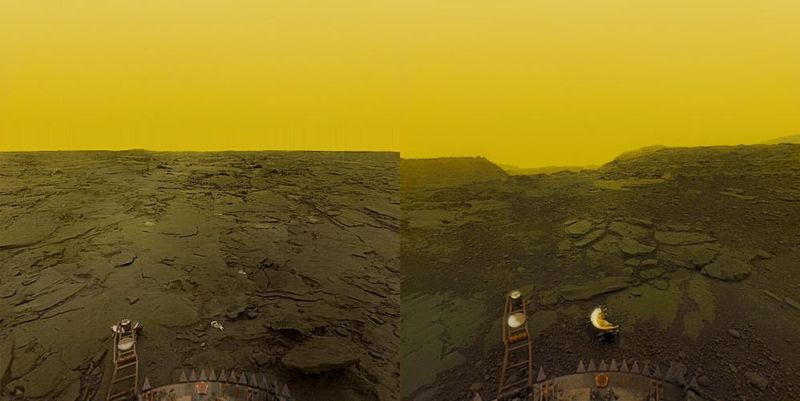 We finally have a computer that can survive the surface of Venus published by nherting
Writer Rating: 0
Posted on 2017-02-09
Writer Description: current events
This writer has written 195 articles.

Venus is one of the most inhospitable places in the solar system. Descending through the clouds of boiling sulphuric rain is actually the easy bit—the hard bit is not being cremated by the surface temperature of 470°C (878°F) or crushed by the atmospheric pressure, which is about 90 times that of Earth, the same as swimming 900 metres under water.

The longest survival time for a human-made object on Venus was 127 minutes, back in 1981 when the Soviet spacecraft Venera 13 landed there. Not dying for two hours, and netting our first ever colour photos of the planet's surface, was considered a huge success; the probe had only been designed to live for 32 minutes before it was cooked, crushed, and dissolved by its environs. Three more spacecraft followed, all Soviet—Venera 14, Vega 1, Vega 2—but we haven't tried to land anything on Venus since 1985.

One of the core problems of exploring Venus is that normal digital computers don't really work there. Standard silicon chips can hang in to around 250°C, but eventually there's just so much energy in the system that the silicon stops being a semiconductor—electrons can freely jump the bandgap—and everything stops working. The Venera landers kept their electronics cool with cumbersome hermetically sealed chambers, and sometimes the innards were also pre-cooled to around -10°C before being dropped into the atmosphere by the parent orbiter.

Over the last few years electronics based on the semiconductor silicon carbide (SiC) have started to mature. SiC has drawn a lot of interest from the military and heavy industries because it can support very high voltages and temperatures—and those properties make it a very suitable candidate for computing on Venus, too.Now, researchers out of NASA's Glenn Research Centre appear to have cracked the other big problem with high-temperature integrated circuits: they've crafted interconnects—the tiny wires that connect transistors and other integrated components together—that can also survive the extreme conditions on Venus.

The NASA Glenn researchers combined the new interconnects with some SiC transistors to create a ceramic-packaged chip. The chip was then placed into the GEER—the Glenn Extreme Environments Rig, a machine that can maintain Venus-like temperature and pressure for hundreds of hours at a time. The chip, a simple 3-stage oscillator, kept functioning at a steady 1.26MHz for 521 hours (21.7) days before the GEER had to be shut down.

NASA Glenn says this is the first reported demonstration of a computer chip operating in Venus-like conditions for multiple days/weeks without the aid of a pressure vessel, cooling system, or other means of protection. "With further technology maturation, such SiC IC electronics could drastically improve Venus lander designs and mission concepts, fundamentally enabling long-duration enhanced missions to the surface of Venus," the researchers conclude.

Sending a lander to Venus requires more than just high-temperature electronics, though. While researching this story I stumbled across a fascinating website that dives into the Soviet exploration of Venus from 1961 to 1985. It turns out that creating tools that continue to work at 470°C and 9MPa is rather difficult. Check out this description of the drilling apparatus on the Venera 13 and 14 landers:

The mechanical side of engineering a Venus lander would still be difficult today, but thanks to advances in materials science, oil drilling, and other high-temperature industrial pursuits, it should be within our capabilities. A rover, with more moving parts, would be a lot harder—though apparently NASA Glenn is working on a land-sailing rover that could be ready for 2023.