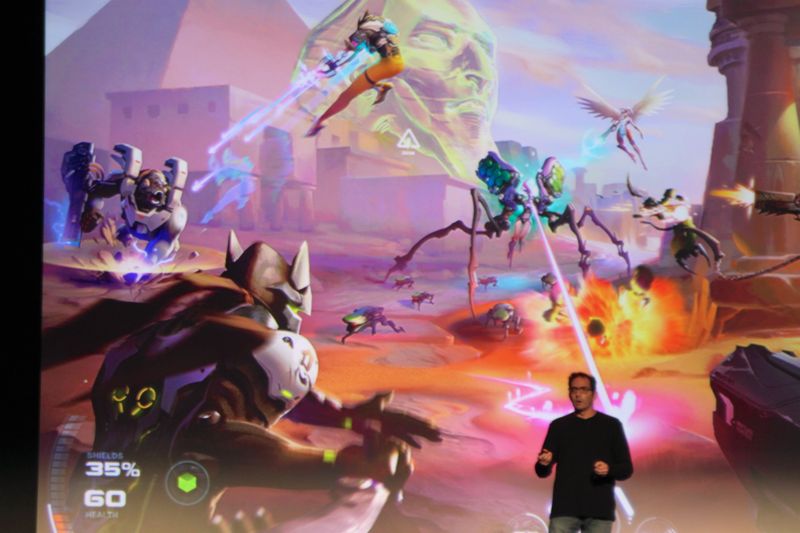 LAS VEGAS—May of 2013 was not a very fun time to be at Blizzard if you hear Game Director and Vice President Jeff Kaplan tell it. After years of work on Project Titan, the massive MMO that was to be Blizzard's big follow-up to World of Warcraft, the game had been unceremoniously canceled (though official confirmation of that cancellation wouldn't come for another year). "For various reasons, we ran into a lot of trouble on the project," as Kaplan put it on stage at Las Vegas' DICE Summit today.

In the wake of the cancellation, most of the 140-person Project Titan team was forced to relocate with Blizzard's existing projects or put on "long-term loan" with those franchises. Forty of the remaining team members, however, were tasked with coming up with a brand-new, Titan-replacing idea in order to avoid the same ignominious relocation as their colleagues.

After years working on Titan, they were given just six weeks to craft this new game concept.

When Kaplan joined Blizzard 15 years ago, he said, creating a new game from scratch felt like it would have been a fun and inspiring dream come true. Instead, in the wake of Titan's troubles, that opportunity was coming at what he called "a period of despair. There was not a lot of hope, and we were worried about what our future would be."

Kaplan says the team spent two of their six weeks brainstorming on yet another new MMO and another two weeks working on an MMO adaptation of an existing Blizzard universe (no, he wouldn't say which). Overwatch came about almost to the side of these efforts, inspired by character and class designs that were initially designed for those other projects. Many of the early character designs were even taken directly from work on the canceled Project Titan.

After tackling high fantasy and sci-fi with franchises like Diablo and Starcraft, Kaplan said Blizzard found itself struggling with the "frontier" of a game set on Planet Earth during Project Titan development. "What's cool about Planet Earth... that we could have a Blizzard game take place there?" the team would ask itself according to Kaplan. It's a question they'd keep trying to answer with Overwatch.

Looking at other games set on Earth, the Overwatch team found the overwhelming motifs were the post-apocalyptic wastelands of The Last of Us and Fallout 4 or else the "realism" of Call of Duty and Battlefield's, er, battlefields.

Rather than further mining those overcrowded spaces, the Overwatch team wanted to design an Earth with "a future worth fighting for." They wanted to create a game that made "as many gamers as possible feel... they are welcome."

For inspiration, the team started by seeking out places people already want to go on Earth—common vacation spots. Santorini, Greece became the direct inspiration for the game's Ilios map, while the Dorado map was literally inspired by a Google Image search for "a colorful Mexican town" (the actual reference image they use, though, turned out to be a photo of Manarola, Italy).

The idealized version of Hollywood's streets that existed in the designers' heads, meanwhile, ended up being much more compelling than a more "realistic" version of the town generated based on an actual visit. And for an Iraqi map, the team wanted to imagine a better future for a locale that is too often used simply as the placeholder for "dirty hellhole" in media. "Is it really necessary to show dusty streets or bombed out buildings anymore," Kaplan asked rhetorically. "Haven't we seen enough of that, not just in video games, but in the world?"

While many people think that diversity was an explicit goal for the Overwatch team, Kaplan said that the game's diversity just grew out of the team's actual goals of inclusivity and open-mindedness. "You might be from somewhere we haven't represented yet in Overwatch, but you can imagine there being an Overwatch hero or map from your area," he said. "It seems totally plausible. At any time, I could be represented in the game."

That feeling only comes from challenging stereotypes with characters like Ana, a Sniper who happens to be an older woman with a complicated relationship to her daughter, Kaplan said. It also means showing that "normal things are normal... so they become more normal" as in a supporting comic book that showed Tracer kissing her girlfriend in a domestic scene.

At this point, though, the player community has so thoroughly taken ownership of Overwatch's characters that Kaplan says he feels Blizzard employees are "just the custodians of the universe."

"They took over the world-building. That have stories for who's dating who... we love it," he said. "It's the best thing ever."

While Kaplan said that games showing realistic settings and warning of post-apocalyptic futures are still important, he thinks Overwatch "shows there's room for positivity and inclusiveness in our industry as well... We started building Overwatch from almost a selfish place—faced with little hope and a lot of despair. It felt like failure. To pull ourselves out of a dark situation, we imagined a bright and vibrant world. And it sort of came true."