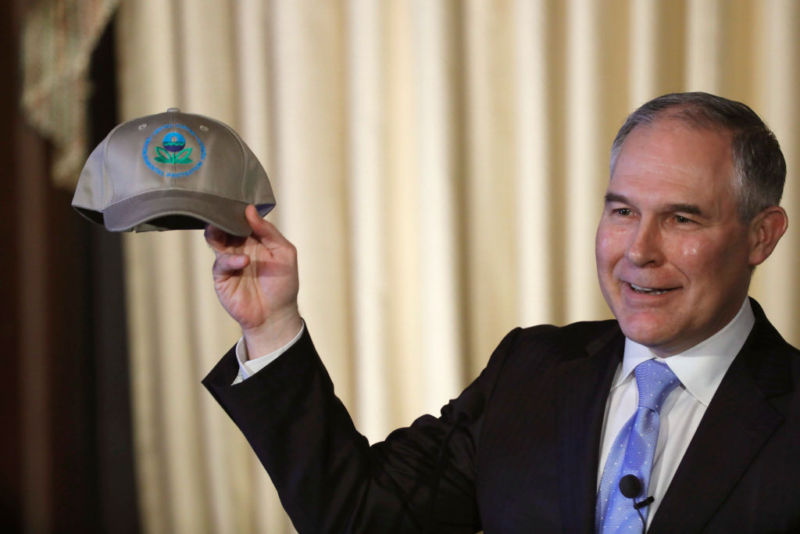 The Environmental Protection Agency is charged with enforcing two of the major pieces of US environmental legislation: the Clean Air and Clean Water Acts. This necessarily makes it a scientific agency, as it has to incorporate information from sciences like geology, atmospheric science, toxicology, public health, and more. In that light, it's rather disappointing to have the recently confirmed head of the EPA, Scott Pruitt, confirm that he doesn't trust scientists, at least when it comes to the climate.

In an interview today, Pruitt was asked, "Do you believe that it's been proven that CO2 is the primary control knob for climate?" We'll get back to the awkward question, but for now, let's focus on Pruitt's answer:

No, I think that measuring with precision human activity on the climate is something very challenging to do and there's tremendous disagreement about the degree of impact. So no, I would not agree that it's a primary contributor to the global warming that we see. But we don't know that yet. We need to continue the debate and continue the review and the analysis.

Mr. Pruitt, meet Richard Alley, a registered Republican who happens to be the Evan Pugh Professor at Penn State's Department of Geosciences. Conveniently, Alley has prepared a talk that directly answers the host's question: "The Biggest Control Knob: Carbon Dioxide in Earth's Climate History." In fact, that talk was prepared back in 2009.

You can't say that Richard Alley schools EPA head Scott Pruitt; since the talk was given over five years ago, he pre-schools him.

There's also a group of scientists that's tasked with summarizing our understanding of the climate called the IPCC. Four years ago, they came to the following conclusion:

It is extremely likely [95 percent probability] that more than half of the observed increase in global average surface temperature from 1951 to 2010 was caused by the anthropogenic increase in greenhouse gas concentrations and other anthropogenic forcings together. The best estimate of the human-induced contribution to warming is similar to the observed warming over this period.

In fact, the IPCC has carefully examined the evidence for the role of humanity in driving the most recent warming. The evidence is laid out in detail in the 85 pages of Assessment Report 5, chapter 10, but it can be summarized nicely by the following graph, which shows the behavior of the climate from 1951 to 2010. 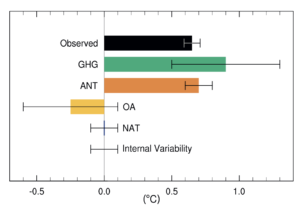 The black bar shows the temperature rise that's happened during that period. In green, we have the warming contribution you'd expect from the greenhouse gas emissions we've made; in yellow are our other effects on the climate, which are dominated by the cooling influence of our pollution. If you sum those up, you get orange, the total human contribution to the climate. Note that it matches the observed temperature change.

It's also worth pointing out that natural influences and the climate's normal variability are essentially flat during this time period. That's not to say nothing natural has changed. The Sun's activity rose at the start of this period for instance. But it's fallen back again at the end, resulting in a contribution that's neutral overall. The natural cycles in the climate all operate on short time scales that average out over 60 years or on much, much longer ones that show negligible change over a span like this.

This isn't to say that there's no disagreement among scientists about these conclusions. A few people still dispute these overall conclusions, but a few scientists also dispute that HIV causes AIDS. What matters is the evidence, and it's overwhelmingly in favor of a humanity driving recent climate change. While there are error bars attached to every number in that graph, the uncertainties aren't large enough to undermine the conclusion that human activity is driving the climate.

What we know, and Pruitt doesn't

All of this information has been available to Pruitt for years. Yet he still stated, "I would not agree that [CO2 is] a primary contributor to the global warming that we see," and the EPA chief failed to provide any indication that he'd made that assessment based on any sort of evidence. This suggests Pruitt hasn't bothered to research the evidence, and he does not trust the experts that generated and gathered it into coherent reports.

This is the exact opposite behavior we'd like to see from the head of a science-driven government agency. But it's in keeping with the widespread indifference to expertise and accurate information that characterizes the current US' political environment.

But it's not just the politicians showing indifference. The host, Joe Kernen, also displayed some issues during his portions of the clip. What's worse, he should know better—he has a master's degree and has done research in biology. Yet, in his question, Kernen is asking about whether the human influence on the climate has been "proven." Science doesn't prove anything; it provides answers with greater and lesser degrees of certainty.

Contrary to the Kernen riff at the end, things reach a degree of certainty when we can consider the science settled. To take an example from his own field, biology, we have an extremely high degree of certainty that evolution takes place given that we've observed it happening in the wild, in the lab, and (through fossils and DNA) over the history of life on Earth. In that case, the science is settled: evolution takes place, even if there are uncertainties in each individual piece of evidence for it.

But contrary to his own fears, I won't call Kernen a denier for raising doubts about whether science can ever be settled. I'd just suggest he think a bit more about his own education. If our political leaders want to question the role of evidence and expertise, it's important for the press to avoid acting as cheerleaders as they do it.