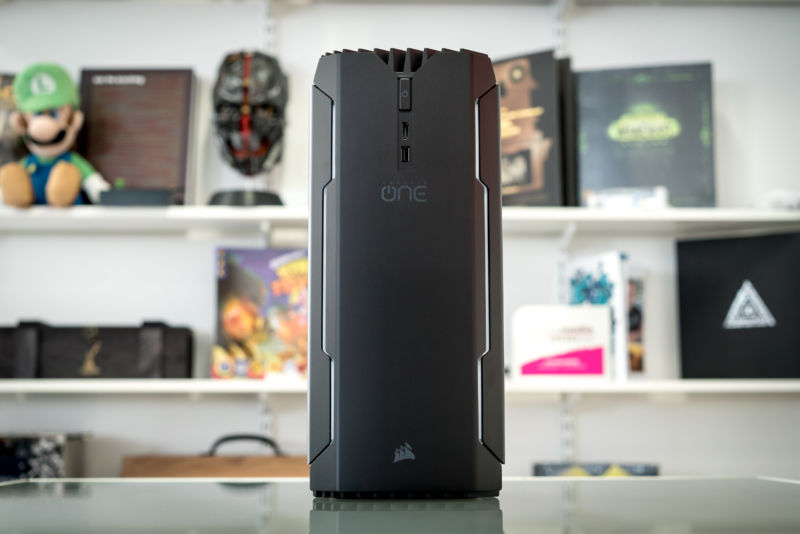 It's hard to believe that the Corsair One comes from the same company that designed the Bulldog, a small form factor PC so monstrously ugly that the mere thought of placing it in a living room was enough to set off a spousal gag reflex. Where the Bulldog was a confused mishmash of jaunty, l33t gamer angles, the One is sleek, sophisticated, and—dare I say it—even a little grown up.

That Corsair continues to sell a slightly updated version of the Bulldog is something of mystery considering just how good the Corsair One is. Of all the small form factor (SFF) PCs I've tried—and there have been quite a few over the past year—it is by far the best. I'd even go as far to say it's one of the best pre-built PCs you can buy, full stop.

At £2,300 for a fully loaded version, the Corsair One isn't cheap by any means—and as always, going the DIY route can lead to substantial savings—but few homebrew PCs have such a tiny footprint. Fewer still do so while being entirely liquid cooled, graphics card and all. It's a combo that results in a PC that doesn't just fit into the living room environment aesthetically, but acoustically too.

And, unlike the entirely custom hardware of the Zotac EN1080, you can even upgrade it.

Well, sort of. The Corsair One does indeed feature standard hardware. Inside is a mini-ITX motherboard by MSI. There's one of Corsair's 400W, 80 Plus Gold rated modular SFX power supplies, two sticks of Corsair Vengeance 2400MHz DDR4 RAM, and a socketed Intel Kaby Lake 7700K processor. A riser cable wraps around from the single PCIe slot to the backside of the motherboard, where there's space for a triple-slot graphics card. Extension cables then bring HDMI (1x) and DisplayPort (2x) to the rear of the case.

But in the fully loaded version of the One, both the GTX 1080 graphics card and the CPU are liquid cooled by two separate all-in-one 240mm radiators, which flank each side of the One's case behind vented aluminium panels. Corsair doesn't intend for the One to be user serviceable—although getting inside just involves pushing a button and undoing four screws—but replacing the CPU is an easy enough task, as is upgrading the 2.5-inch SATA SSD, which sits insides a simple plastic slot.