Counter-Strike Players Are Skeptical Of The Game's New Map 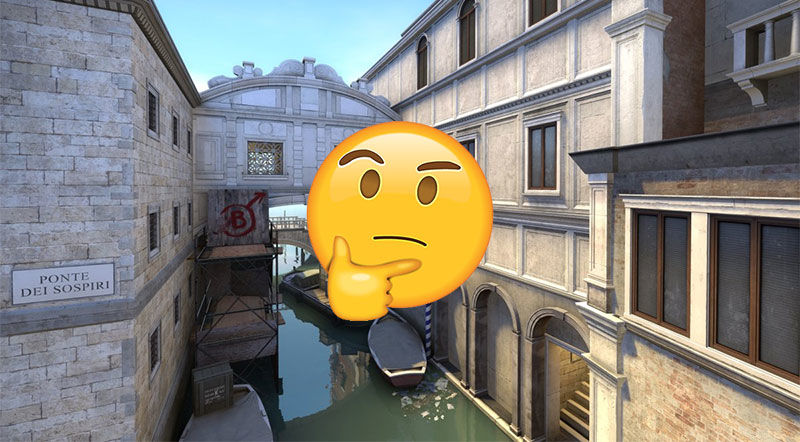 Yesterday, Counter-Strike received its first new Valve-developed map in quite some time. It’s called Canals, and it’s based on a (conspicuously unnamed) “historic Italian city” that is definitely Venice. The initial reaction, however, has not exactly been love at first sight.

Canals, you see, is not a typical CSGO map. It’s got multiple weird routes to the B bomb site for both teams, and the site itself is dangerously enclosed. The A site, meanwhile, is almost the polar opposite: open and surrounded by cover. Many, however, feel like Canals is a poorly balanced first draft, rather than a polished execution of something new. For example, players like DrakePHOSE have pointed out that the terrorist team can reach the B bomb site too quickly, in a way that can deny the counter-terrorist team of precious preparation time:

Other players, like Cruxal, have taken issue with how exposed CTs are on the fastest route to the B bomb site, the small size of said bomb site (which makes it perhaps overly susceptible to molotovs), and the general feel and pace of the map:

Again, though, Canals is, in many ways, not a traditional CSGO map. Neither the quick nor stealthy CT routes to the B site fit a mold players are entirely used to, and the A site is more subtly awkward. There are also pathways in the canals themselves, making things even less straightforward.

Despite this, many players are still trying to analyze it through the lens of the maps they’re used to playing, the template shared by Dust2 and many others. That, say some, is the real problem—not the map itself, which actually holds a lot of potential, pending a round or two of fixes.

“Every map we have have the same basic layout model—with few changes—and people play those maps in a set way,” said a player named ced_piano. “It’s hard to adapt, but it can bring new strategic perspective. There are a lot of new things on this map, and I’m not looking for it to be just like the others. Maybe it’s not a good map, or maybe people don’t think outside the box yet. Time will tell, this is too soon, way too soon.”

Another player named TreeJib went into more detail. “This map is all about executes,” they wrote. “It’s not about retakes. If it was about retakes, A would’ve been less open and B wouldn’t be so wallbang-able. This map’s layout was absolutely designed to promote new gameplay at a high level. If this ever makes it to active duty (following a year of fixes), deciding what side to start on, or whether or not to ban the map, is a critical choice. By putting this in active duty, they would be forcing top teams to learn the map properly, which could trickle down well. I think pro teams will eventually like this map, and I can see this being added to ESEA, as well. This map really does open the doors for serious changes to meta, in a good way.”

So, is Canals a resounding success, or a belly flop into what you’re expecting to be a refreshing pool of water, but then you crash into an angry man in a gondola? It’s too early to tell. Per usual, Valve says they’re listening to community feedback so they can “make improvements in the future.” All that’s certain right now is that Canals is different. In a game as entrenched in multi-layered metas (not to mention hyper-specific expectations) as CSGO, it’s important to shake things up sometimes. Maybe this’ll be the map to do it.