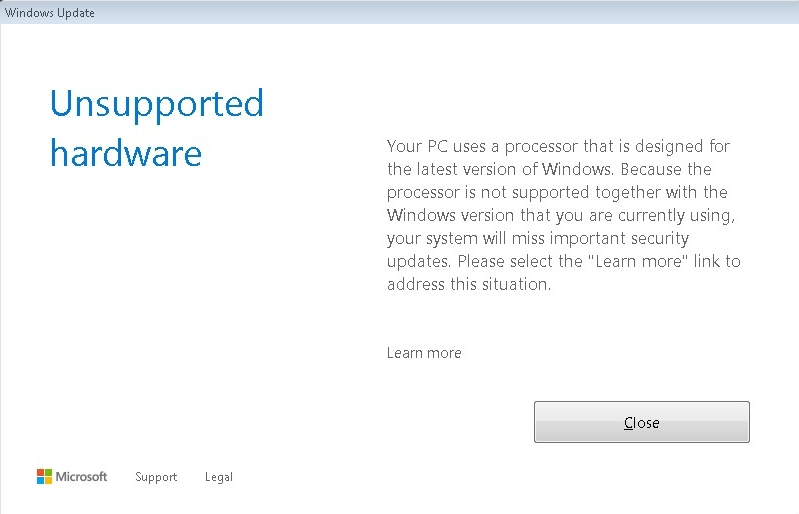 We knew Microsoft was planning to block installation of Windows 7 and 8.1 updates on systems with Intel 7th Generation Core processors (more memorably known as Kaby Lake) and AMD Ryzen systems; we just weren't sure when. Now, the answer appears to be "this month." Users of new processors running old versions of Windows are reporting that their updates are being blocked. The block means that systems using these processors are no longer receiving security updates.

The new policy was announced in January of last year and revised slightly a couple of months later: Kaby Lake and Ryzen processors, and all new processors on an ongoing basis, would only be supported in Windows 10. Windows 7 and 8.1 would continue to support older processors, but their chip compatibility was frozen.

Awkwardly straddling the two policies are Intel's 6th Generation Core processors, aka Skylake. Some Skylake systems will continue to be supported in Windows 7 and 8.1. Others will not. Certain Skylake models shipped by 16 specific OEMs will continue to receive update support. But other Skylake systems will also need to upgrade to Windows 10 to receive ongoing updates.

Microsoft's policy does not strike me as objectionable per se. In practice, I would imagine that Windows 7 and 8.1 would run fine on Kaby Lake and Ryzen machines. But Microsoft can't just shrug its shoulders and assume that everything will work just fine on the old chips. The company would have to test and validate the old operating systems on the new hardware, and I can see why it would rather not do so.

But the manner in which the change in policy is being introduced is what leaves the worst taste in my mouth.

Microsoft argues that the new processors include new capabilities and hardware that makes compatibility with the older operating systems difficult or undesirable. There are elements of truth to this; both Ryzen and Skylake made some important changes to features, such as processor power management, and on some level I can accept that Microsoft may not fully support these capabilities on older operating systems. Windows 7 also has no built-in support for USB 3 and NVMe, which can make the mere act of installing it onto a modern system a little tricky.

Dropping support for Windows 7 is also arguably consistent with Microsoft's support policy. Windows 7 has been in extended support since January 2015. Products in extended support are due to receive security updates, but no new functional or other improvements will arrive. Limiting support for processors that were introduced after this time does not seem entirely unreasonable.

But Windows 8.1 is a different story. Windows 8.1 is still in its mainstream support period, during which it should receive not just security fixes, but also functional improvements. Unlike Windows 7, Windows 8.1 already includes native support for USB 3 and NVMe, so the installation headaches that can occur with the old operating system are avoided. Refusing to support the latest processors in an operating system that's still fully supported feels distasteful. It feels like something of a bait-and-switch—Microsoft's "mainstream support" promise apparently has no real meaning.

It really won't be too long before the only Windows version that's in mainstream support is Windows 10. I think that Microsoft should have waited until that moment before imposing this new policy.