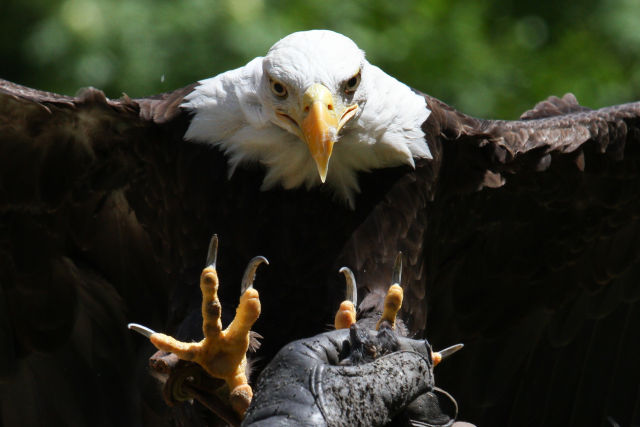 Earlier this year, Ubisoft announced that it was interested in bringing "a number of its games" to VR platforms like the Valve-powered HTC Vive, the Oculus Rift, and Sony's Project Morpheus. While there's nothing on the scale of Assassin's Creed or Splinter Cell just yet, the company is making progress with the nascent platforms. As with everything VR, it's very much about baby steps rather than one giant leap.

Ubisoft's Eagle Flight demo, which is being demonstrated with Oculus Rift at this year's Gamescom in Cologne, is one of those first efforts. It puts you in the shoes (claws?) of an eagle, complete with a beak in peripheral vision, flying across the rooftops of Paris. The controls are entirely motion-based, with a tilt of the head causing you to swoop from side to side. While that might seem a little disorientating or even potentially nauseating, it works very well indeed.

OK, so I didn't quite shout "oh my god, I'm flyyyiiiing!" when I tried it, but the tilt controls were responsive, and even dramatic swoops down from a height didn't cause any problems. If anything, it could have done with being a touch faster or at least better conveying the sense of speed and scale in order to really capture that feeling of flight. But the most important thing was that I didn't feel sick. If you can nail that in VR, that's really half the battle.

The first part of the Eagle Flight demo revolved around flying through rings and passing over checkpoints in order to reach the Eiffel Tower and fly up to its impressive summit. The second half kicked things up a notch, splitting the group I was with into two teams (did I mention Eagle Flight is multiplayer?) and entering a simple capture-the-flag game. Here, there was a controller involved, although Ubisoft sensibly kept all the directional controls on the headset. The controller served only to adjust speed and fire off eagle shouts in order to kill the opposition.

Eagle Flight was ludicrously fun for something so simple. Granted, you'd need the right type of people to play it with, but if you do, teaming up to take down a flag-carrying enemy eagle with a clever swooping manoeuvre is a thing of beauty. My session got quite heated, too, with a 2-0 deficit making my teammate and I frantically launch eagle shouts at the opposition to catch up. First-person dogfighting, or birdfighting in this case, is hardly a new premise for VR—see the likes of Eve: Valkyrie and Elite: Dangerous—but Ubisoft's early attempt is a good one. You can imagine the possibilities that open up by enabling things like turbo boosts, homing projectiles, and maybe even other types of angry birds. (Sorry.)