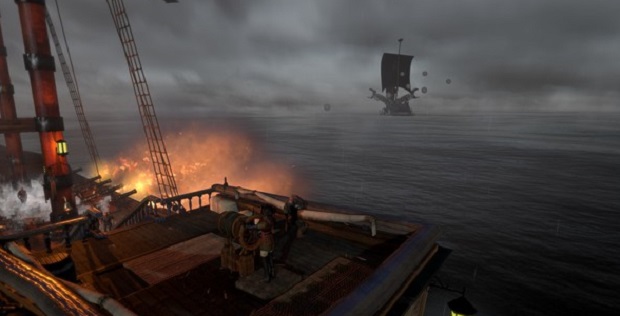 Warhammer is a refuge from both progress and decline. It’s a safe space where you can always enjoy a militarist’s historical highlight reel from the Late Middle Ages through the Enlightenment, where things will never get much better or worse. And Empire will always stand on the brink of collapse and annihilation, the forces of chaos and barbarism will always encroach on the margins, and there will always be a place for someone with a taste for violence and a dream.

The Golden Age of Piracy lasted less than a century before buccaneers were practically extinct, and order restored to the trans-Atlantic shipping lanes. And just a century after that, the Royal Navy’s domination of the world’s oceans was so complete that another Trafalgar or Nile was unthinkable. But in Man o’ War: Corsair, the sea will always be a bloody no-man’s land, with plenty of room for a lone captain to make his fortune and change the world in the process.

Corsair may look like Assassin’s Creed: Black Flag without all the cities and assassination business, but it’s much closer to the Mount & Blade series at heart. Your ship is your only means of interacting with the world, and each port of call is just a new place to get a mission or a quest, doing some commodity trading, and buying upgrades for your ship and crew. The rest of the time, you’re enjoying the view from the quarterdeck, spying strange sails on the horizon, and dodging pirate and Ork patrols.

In terms of atmosphere, it’s as overwrought and dramatic as you’d expect from anything with the Warhammer name. Coastal cliffs loom out of the darkness at night, thunder and snow storms whip the sea into a froth and send it flying across the decks. There’s almost always dense fog and rain to contend with (perhaps too much), and enemy ships can vanish into the murk at a moment’s notice, only to split it open against with a thundering broadside.

I wish the ship itself had more of a relationship to the weather. While I applaud the fact that Corsair is pretty unforgiving when it comes to sailing into the wind (I judge all sailing games by how long it takes them to explain the principles of tacking), the changing weather effects don’t translate to changing sailing. Whether the wind is roaring over high seas or you’re sailing across a glass ocean on a rare clear day, the ship always handles roughly the same, which undercuts some of those great weather effects and also makes handling the ship slightly less interesting in combat.

On the other hand, Corsair makes up for it by creating a lively and dangerous ocean. Occasionally I would run into a lone-wolf pirate and engage in a classic stern-chase or a point-blank, yardarm-to-yardarm battle. But it was far more likely that I’d be out sailing toward one destination when I’d spot a squadron of Ork warships bearing down on a squadron of Imperials, and suddenly I’d be sucked into a full-fledged naval engagement. While there’s not a ton of depth to combat, having to worry about friendly fire and shipping traffic in battle made for some unique challenges and a terrific spectacle.

The Early Access AI may need a little work, however, since I noticed enemy ships were knocking each other out on a regular basis. Occasionally, this made for some great stories, like when I got jumped by a trio of Orks. Two of their ramships raced toward me and, as I put own ship into a hard turn to catch the wind on my sails, they blundered into each other and exploded, instantly turning the odds back in my favor.

Then there are the boarding actions, which certainly feel exciting even if they don’t quite play as nicely as I’d like. When you collide with an enemy warship, your ships will grab onto each other and the crews of both ships will storm over the sides. At this point your captain draws a gun and steps away from the wheel to help shoot at intruders.

In practice, this means blazing away into dense hand-to-hand fighting until your crew are all dead and you lose, or the enemy are all dead and you win. Corsair doesn’t really work as a third-person shooter, but it’s still undeniably cool to see hulking Orks vaulting onto the back, or shooting a greenskin that seems to tower over your character. I just wish there were more to it than standing back and lining up shots at enemies who are distracted by your AI crew.

I’m having a lot of fun with Corsair, but I don’t think it’s quite at the Mount & Blade level yet. Most of the metagame / “overworld” elements are too simple and too inconsistent to be satisfying. Quests bugged routinely, so that I’d fulfill a mission, dock in a friendly port, and then somehow lose the entire mission upon departure. I got used to sailing all the way back to quest locations the moment I fulfilled my objectives, rather than risk having the assignment disappear.

Likewise, trading was a very simple matter of buy low / sell high. I didn’t need to know anything to make a fortune trading goods, because buying the cheapest things for sale always guaranteed massive profits a couple ports away. I also wonder if commanding my own ship in battle will remain interesting over the long haul, given how simple and straightforward it is. My hope is that when the Allied Captains and crew management features are added, Corsair will gain some depth as a naval wargame. Right now it’s like Mount & Blade, except without being able to control a big army.

Atmosphere alone takes it pretty far though. Being terrorized by a giant shark in the dead of night, or having your cargo of plague refugees burst out of the hold and onto the deck as zombies, is as frightening and memorable as I’d want from a Warhammer game. But outside of those moments, as I sail from one port to the next, I’m left wishing there was more to do, and that the world would let me make a mark on it. A pirate is lured to sea by the promise of freedom and adventure. Right now, Corsair has half of that equation.