Astronomers find water in the atmosphere of a warm, Neptune-sized planet 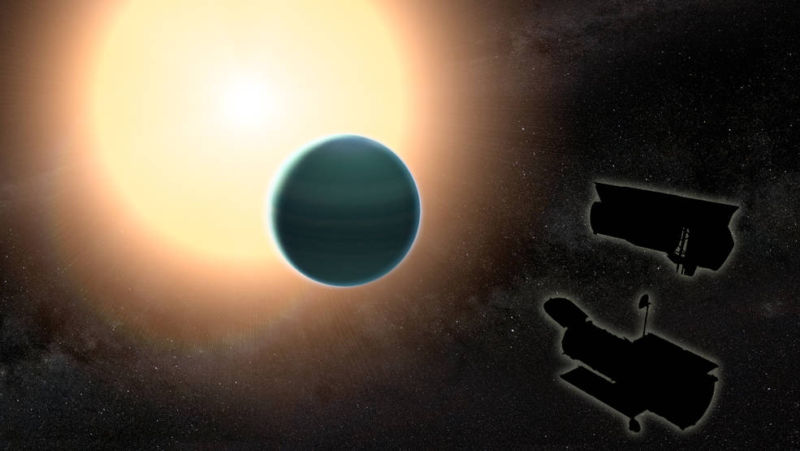 Scientists are announcing a rare look into the atmosphere of a distant exoplanet more than 400 light years away. The planet is roughly Neptune-sized and orbits close to its host star. And now we know its atmosphere contains significant amounts of water.

Significant amounts, but not quite as much as we might expect, based on what we've seen in our own Solar System. And that suggests that most of the planet's atmosphere is the original hydrogen-helium mixture that it formed with.

The planet has the catchy name HAT-P-26b, which indicates it was first found by the Hungarian-made Automated Telescope (HAT) Network. It's typical of many of the early exoplanet spottings: a relatively large planet orbiting close to its host star. So close, in fact, that it takes only a bit over four days to complete an orbit. While its mass is similar to Neptune's, its radius is substantially larger, at about 40,000 kilometers compared to Neptune's 25,000.

The large size comes from two factors: there's a lot of atmosphere, and the planet's proximity to its star means that the atmosphere has expanded due to the heat. In fact, its equilibrium temperature is a toasty 1,000 Kelvin.

That large, puffy atmosphere makes HAT-P-26b a great candidate for atmospheric analysis. From Earth's perspective, the planet transits between us and its host star. While it's transiting, it blocks some of the star's light, making its presence known. But part of the star's light also passes through HAT-P-26b's atmosphere on its way to us, and any atoms or molecules in that atmosphere will absorb specific wavelengths, eliminating them from the light that makes its way to Earth.

So, by imaging the star with and without the planet in front of it, we can detect a drop at specific wavelengths caused by their absorption in the planet's atmosphere. While this is only a tiny fraction of the total light that reaches us, the big, puffy atmosphere of HAT-P-26b makes the signal a bit easier to identify.

The large international team behind the new work obtained imaging time on the Hubble Space Telescope and found some archival images taken by the Spitzer Space Telescope. Combined, the wavelengths in the data covered areas where key molecules would absorb: water, carbon dioxide, and methane.

And the results are clear: while there's no indication of methane or carbon dioxide, there are significant amounts of water in the atmosphere—the statistical confidence in its presence is over eight standard deviations. There's also some general scattering of light that indicates the presence of clouds. Of course, at these temperatures, the clouds aren't water vapor; the authors conclude they're probably composed of sulfur-based chemicals, like zinc and sodium sulfide.

But we also know the atmosphere can't be all water or the planet would be much denser than it is. So the authors conclude that it probably has a substantial amount of gas left over from the formation of the HAT-P-26 system, meaning hydrogen and helium.

While the results are interesting in their own right, they also help tell us about how heavier elements end up incorporated into planets. Astronomers call anything heavier than hydrogen and helium a "metal," and they refer to the fraction of these metals in an atmosphere as its metallicity. In our own Solar System, there's a clear trend: as mass goes up, metallicity goes down. (This trend was obtained by measuring the amount of methane in the atmospheres of Uranus, Neptune, Saturn, and Jupiter.) It's actually a tight, linear relationship when graphed on a logarithmic scale.

There are two ways this could come about. One: heavier planets should be more effective at drawing in light gases like hydrogen and helium. And two: in our Solar System, the lighter of these planets formed farther out, where more of the heavier molecules like water and methane would have frozen into icy bodies that could later be swept up by the planet.

Now, we're starting to get a chance to test whether this rule holds outside our Solar System. WASP-43b, at about twice Jupiter's mass, is right on the linear trend seen in our Solar System. Two other exoplanets, WASP-12b and HAT-P-11b, seem to be a bit above the trend line, but the uncertainties in our measurements are very large and overlap the trend.

HAT-P-26b, by contrast, is well below the trend line. Even once the uncertainties in our measurements are taken into account, it's still a standard deviation off the trend.

Why would HAT-P-26b be so different? The simplest solution is that it formed near where it orbits, close to the host star. At those distances, things like water and carbon dioxide can't form ices, and so the planetesimals that delivered material to HAT-P-26b wouldn't carry as much of these materials. An alternative, however, is that HAT-P-26b obtained its atmosphere relatively late in the system formation, after most of the planetesimals had already been eliminated. Thus, the resulting atmosphere would primarily be composed of gas.

Of course, the two aren't mutually exclusive, and the authors suggest that both mechanisms could have been at play.

While the results don't tell us definitively how the atmosphere of HAT-P-26b formed, they do represent real progress. We can now compare four exoplanet atmospheres to what we see in the Solar System, and HAT-P-26b is the lightest among them. Its size also places it in the most common category of planets we've identified so far.

But more importantly, atmospheres make all the difference when it comes to the conditions on a planet. Even within a star's habitable zone, the atmosphere can determine whether a planet is hot enough to melt metal or a frigid ball of ice. Until we know more about the diversity of atmospheres out there and how they typically form, conditions on other planets will always be a matter of guesswork. Further results like these could start taking the guesswork out of things.