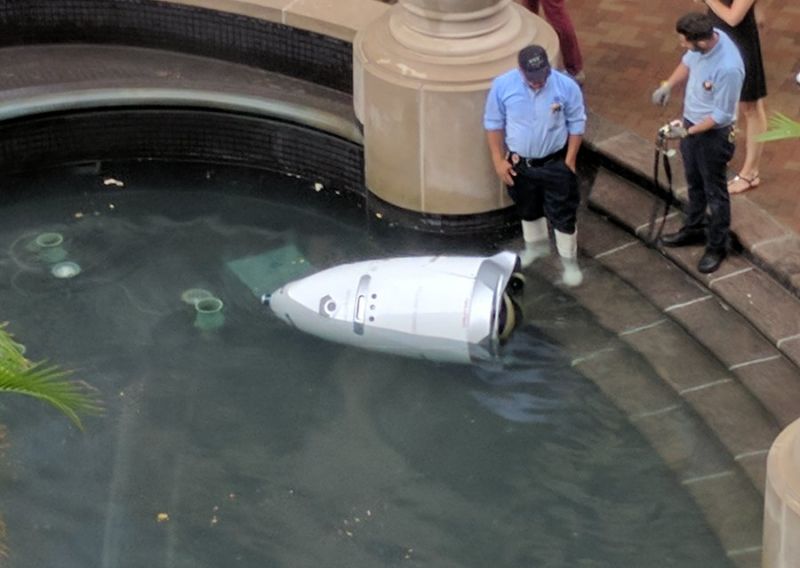 Security guard robot ends it all by throwing itself into a watery grave published by nherting
Writer Rating: 0
Posted on 2017-07-20
Writer Description: current events
This writer has written 195 articles.

The automation revolution, where most of our jobs are replaced by robots and we spend the rest of our days floating around on rubber rings sipping piña coladas, has hit a snag: a Knightscope K5 security bot appears to have fallen down some stairs and drowned itself in a water feature.

The scene, which took place at the mixed-use Washington Harbour development in Washington DC, was captured by Bilal Farooqui on Twitter. One local office worker reported that the K5 robot had only been patrolling the complex for a few days. Knightscope said in a statement that the "isolated incident" was under investigation, and that a new robot would be delivered to Washington Harbour this week for free.

We first wrote about the Dalek-like K5 back in 2014. The first bots were deployed on campuses and shopping complexes near the company's headquarters in Mountain View, California. By December 2016 the company had 15 security bots actively deployed in California, and earlier in 2017 it disclosed that it is "presently deploying its technology with 24 clients" in "five states and three time zones."

The K5, which is equipped with lots and lots of sensors, is ostensibly an interesting piece of high-tech kit. It has a 360-degree video camera array, sensitive microphones, air quality sensors, and even thermal imaging capabilities. The cameras can apparently scan up to 1,500 car number plates per minute; the microphones can detect gun shots and other notable sounds. Autonomous mobility is provided by a mix of lidar, radar, and the video camera array—but given that it missed the steps down into the Washington Harbour water feature, perhaps the software needs tweaking.

Knightscope's K5 can't yet make arrests, taser a criminal, or wade into a burning building, but it can phone the cops or fire off a loud siren. Basically, if your shopping centre or office complex had five patrolling security guards, the idea is to replace four of them with robots and leave the fifth in a central office that can respond to any issues.

In practice, the K5 has had a fairly rough few years. In 2016, one of the robots, which weigh over 300 pounds (135kg), ran over over a 16-month-old child at the Stanford Shopping Center. Knightscope called it a "freakish accident," suspended the bots while it carried out an investigation, and formally apologised to the kid's family. In April this year, right outside the Knightscope offices, a drunk man beat up one of the bots as it was patrolling the car park.

"Security guard," along with fast-food and factory workers, is fairly high up the list of jobs that will eventually be replaced by autonomous systems. That the K5 fell into a fountain after three years of commercial use is a little disappointing from a technological standpoint.

And now, I leave you with some more photos from the Washington Harbour security bot, which decided to end it all after just a few days of service. RIP.