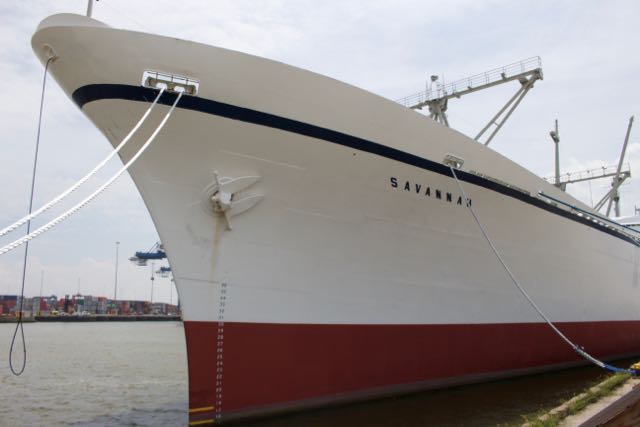 BALTIMORE—Alongside a former grain pier in a strangely quiet corner of this cargo port, there's a ship straight out of the future—the future, that is, as seen from the 1950s. Featuring sleek, modern lines and a giant insignia of an atom, the Nuclear Ship Savannah once sailed the world to demonstrate the peaceful potential of atomic energy.

Constructed at a cost of $46.9 million ($386.8 million in 2016 dollars) and launched on July 21, 1959, the Savannah was the world's first nuclear cargo ship and the second nuclear-powered civilian ship (coming just two years after the Soviet nuclear icebreaker Lenin). Owned by the US Maritime Administration (MARAD) and operated by commercial cargo companies, for nearly a decade she carried cargo and passengers around the world. She also acted as a floating herald for America's seemingly inevitable, cool Atomic Age future. Savannah boasted all the latest conveniences, including one of the world's first microwave ovens.

Many critics have since called the Savannah an expensive Cold War-era boondoggle, but she was in many ways a success. The ship was never intended to turn a profit; rather, Savannah was intended to demonstrate what was possible with nuclear power. Design compromises made to get her into service as a showcase ship with passenger service handicapped her value as a cargo ship, but Savannah did demonstrate the advantages of nuclear propulsion. There was no need to refuel or to take on ballast water as fuel was expended, which meant less time in port and less pollution. Ironically, the Arab oil embargo arrived about two years after her tenure, but Savannahcould have turned a profit during the situation despite these compromises.

Ultimately, the bright atomic future Savannah was supposed to herald quickly lost its luster. The $2 million in annual subsidies required to operate made her a target for budget cuts—especially when the price of oil was low. In 1971, she was taken out of service. By the 1980s, both Japan and Germany abandoned their own nuclear merchant programs; only Russia still operates nuclear-powered merchant ships from its Arctic port in Murmansk. The country has a lone nuclear icebreaking cargo ship and six icebreakers in service.

Today, nuclear power continues to draw a glimmer of interest from the shipping industry. Fluctuating energy prices and the cost of operating diesel-powered ships—particularly "Suezmax" oil tankers—prompted new designs and a change in the insurance rules for nuclear ships. But it’s unlikely that the US merchant fleet will play any role in the return of the nuclear merchant ship, because the US Merchant Marine is a shadow of what it once was.

So more than 45 years after her last voyage, the Savannah remains moored here at the Canton Marine Terminal in a sort of limbo. It has been defueled and had nearly all of its radioactive materials removed, but the Savannah's reactor is still intact—as is the ship's license to operate from the Nuclear Regulatory Commission (NRC).

Savannah officially became a museum ship in South Carolina in 1981 as part of the state's Patriot's Point Naval and Maritime Museum. In the process, the state became a Nuclear Regulatory Commission co-licensee with MARAD. But in 1993, Savannah was turned back over to the Maritime Administration when she needed to be drydocked. "The museum said, 'Just don't bring it back,'" recounted Erhard Koehler, the ship's senior technical advisor and manager. "That was when I became involved."

For the past 24 years, Koehler's life has been tethered to Savannah, first as a project engineer for MARAD and then as her chief caretaker for this past decade. Koehler is the man whose name is on the ship's license from the Nuclear Regulatory Commission. During his tenure, Savannah has been drydocked or moored up and down the Chesapeake, coming to rest at her current Baltimore home eight years ago.

Designated as a national landmark, Savannah continues to be preserved. But the ship is also still regulated by the NRC and awaiting congressional funding for full decommissioning. It's a step that the US government didn't really even think about back when Savannah was built.