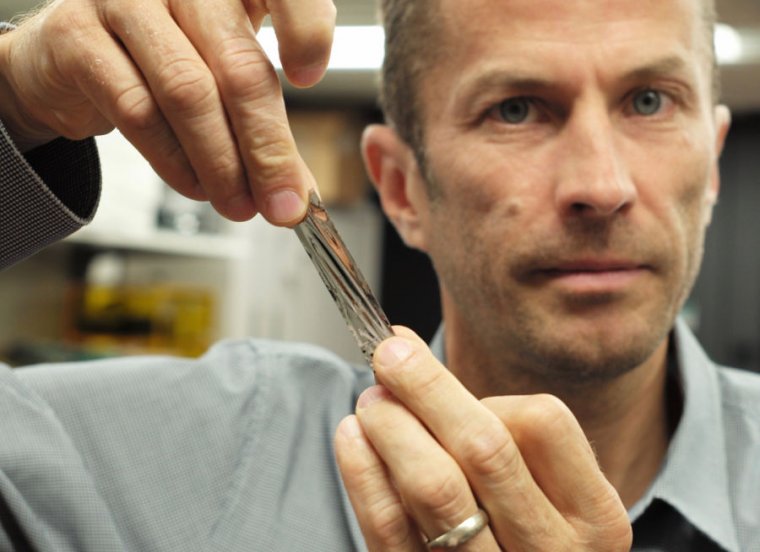 IBM and Sony have developed a new magnetic tape system capable of storing 201 gigabits of data per square inch, for a max theoretical capacity of 330 terabytes in a single palm-sized cartridge.

For comparison, the world's largest hard drives—which are about twice the physical size of a Sony tape cartridge—are the 60TB Seagate SSD or 12TB HGST helium-filled HDD. The largest commercially available tapes only store 15TB. So, 330TB is quite a lot.

To achieve such a dramatic increase in areal density, Sony and IBM tackled different parts of the problem: Sony developed a new type of tape that has a higher density of magnetic recording sites, and IBM Research worked on new heads and signal processing tech to actually read and extract data from those nanometre-long patches of magnetism.

Sony's new tape is underpinned by two novel technologies: an improved built-in lubricant layer, which keeps it running smoothly through the machine, and a new type of magnetic layer. Usually, a tape's magnetic layer is applied in liquid form, kind of like paint—which is one of the reasons that magnetic tape is so cheap and easy to produce in huge quantities. In this case, Sony has instead used sputter deposition, a mature technique that has been used by the semiconductor and hard drive industries for decades to lay down thin films.

The main upshot of sputtering—a cool process that you should probably read about—is that it produces magnetic tape with magnetic grains that are just a few nanometres across, rather than tens or hundreds of nanometres in the case of commercially available tape.

The new lubrication layer, which we don't know much about, makes sure that the tape streams out of the cartridge and through the machine extremely smoothly. Some of the biggest difficulties of tape recording and playback are managing friction and air resistance, which cause wear and tear and chaotic movements. When you're trying to read a magnetic site that is just 7nm across, with the tape whizzing by at almost 10 metres per second, even the smallest of movements can be massively problematic.

We know a little more about IBM's new read head, which appears to be a 48nm-wide tunnelling magneto-resistive head that would usually be found in a hard disk drive—which makes sense, given the tape's sputtered medium is very similar to the surface of a hard drive platter. This new head, combined with new servo tech that precisely controls the flow of tape through the system, allows for a positional accuracy of under 7nm. A new signal processing algorithm helps the system make sense of the tiny magnetic fields that are being read by the head.

The new cartridges, when they're eventually commercialised, will be significantly more expensive because of the tape's complex manufacturing process. Likewise, a new tape drive (costing several thousand pounds) would be required. Still, given the massive increase in per-cartridge capacity, the companies that still use tape storage for backups and cold storage will be quite excited.