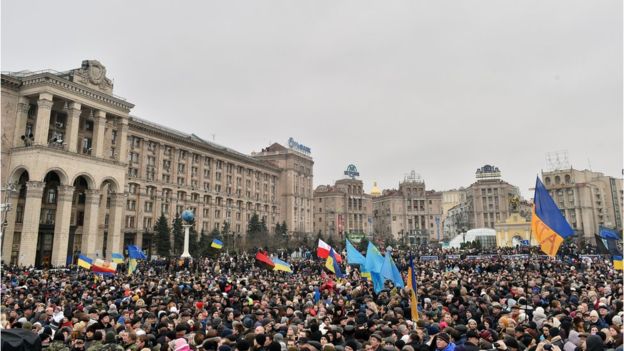 The abrupt resignation of Ukraine's respected minister of economy and trade, his refusal to "serve as a cover-up for covert corruption," has triggered political crisis and an onslaught of recriminations about inept governance. More resignations may follow, and the crisis comes during a treacherous period as the West and Russia battle for influence over the country of 45 million. "Notably, the crisis demonstrates the surprising feebleness of Western efforts to improve governance, cut corruption and foster economic growth," writes Chris Miller, associate director of the Grand Strategy Program at Yale. "It also exposes a critical weakness in the West's strategy to confront Russia in the post-Soviet space." Transparency International ranks Ukraine 130 on corruption out 167 countries. Miller warns that the quest for good governance could take years. In the meantime, political and economic crises mark the country as a major front in the ongoing hostilities between Russia and the West. - YaleGlobal

Russia and the West compete for influence in Ukraine, but Kiev must reduce corruption to control its destiny

KIEV: The idyllic days of the Maidan revolution are over. With the stench of corruption rising from a government that once inspired so much hope, Ukraine is overwhelmed with disillusionment and a clouded political future.

Ukraine's respected economy minister Aivaras AbromaviAius resigned suddenly in February declaring that he would not "serve as a cover-up for covert corruption" and accusing several leading political figures of nefarious dealings. The resignation sent Ukraine into a political crisis, with several other ministers immediately threatening to join AbromaviAius in resigning unless the government stems corruption. The ambassadors of Ukraine's major western allies issued a joint statement criticizing a lack of progress on anti-corruption efforts and threatening to cut off aid.

The crisis has deep roots in Ukraine's political system, with ramifications that stretch far beyond the country's borders. Notably, the crisis demonstrates the surprising feebleness of Western efforts to improve governance, cut corruption and foster economic growth. It also exposes a critical weakness in the West's strategy to confront Russia in the post-Soviet space. Led by German Chancellor Angela Merkel and US President Barack Obama, Western countries have sought to move the Ukraine conflict away from the military sphere toward political and economic competition. They have found the battle for good governance in Ukraine more challenging than expected.

And 25 years of post-Soviet government have done little to improve matters. Indeed, the growing power of oligarchs - a class of billionaire businessmen who made fortunes via theft and mafia rackets - added a new layer of corruption to Ukraine's politics. They defended illicit fortunes by buying political support, paying for court decisions and legislation at will. Such practices continue to this day, which is why Transparency International ranks Ukraine 130 of 167 countries on corruption.

Largely as a result of inept governance, post-Maidan Ukraine inherited a bankrupt treasury, a problem it struggled to confront even as Russia seized Crimea and begin fomenting insurgency in the Donbass region of Eastern Ukraine. Western leaders sought to help Ukraine stand up to Russia, but there was little stomach for providing military aid. Sending troops was never seriously considered. Even the provision of lethal military assistance to Ukraine, an idea backed by some in Eastern Europe and many in the United States, was rejected as too risky and confrontational.

Instead, Western leaders sought to provide Russian President Vladimir Putin with an "off-ramp" from the conflict. Germany and France negotiated a ceasefire deal between Russia and Ukraine in late 2014 and again in 2015. Neither of these deals required an immediate reversal of Russia's battlefield successes or a return of seized Ukrainian territory. Instead, Western strategists suggest privately that the West was better off in competition with Russia in a manner of its own choosing. Since the West's economy is far stronger than Russia's, since its political system is more attractive, the argument goes, a ceasefire deal that moved competition between Russia and the West to the political and economic sphere was likely to benefit the West more than Russia.

Now a year has passed since the second ceasefire deal was signed in Minsk among Ukraine, Russia, Germany and France. The ceasefire has not been fully observed, with observers reporting regular violations of the deal, mostly on the side of Russia or its affiliated militia forces. But no significant territory has changed hands since last winter. The conflict, at least for now, is frozen. Competition for influence, a battle to shape Ukraine's future, is mainly happening in the political and economic sphere.

To minimize Russian influence, the West has sought to bolster Ukraine's economic prospects and to integrate the country more fully into Western institutions. Many Western countries have initiated bilateral programs to support Ukrainian governance reforms, and the European Union has also helped with funding and technical assistance.

The most important driver of Western influence in Ukraine is the International Monetary Fund, which is providing Kiev with $17 billion in loans over the next several years. These funds are designed to resolve Ukraine's budget shortfall and to ameliorate some economic problems. Both are key Western political aims as leaders fear that, if the country's economy does not improve, support for its current government will decline and Russia may move to reassert influence in Ukraine's domestic politics.

The IMF conditioned its financial support for Ukraine on an array of economic and governance reforms, all of which are supported by the major Western powers. For example, Ukraine's oligarch-dominated government had long purchased gas from Russia at market prices, but subsidized consumption at home. That left the government with a massive and unsustainable gas bill every year. It also created space for corruption, as oligarchs jockeyed to illegally acquire permits that let them sell subsidized gas abroad, pocketing the difference between subsidized domestic prices and market-based export prices. Gazprom, Russia's state-owned monopoly, actively encouraged and benefited from these schemes.

This type of corruption hobbled Ukraine's budget. The IMF demanded that these subsidies be eliminated, and Ukraine's government has passed the necessary legislation. Provided there is no backsliding or change of policy, it looks as though the subsidies and the corruption they underwrite will be eliminated by 2017.

But it's easier for outsiders to demand new laws than to reform political culture. The West has found that though the IMF's budget reforms have mostly worked, at least in the short term, the demands for better governance and reduced corruption have not. The reality is that Ukraine's political class is only marginally less corrupt than before the Maidan revolution. There are some new and growing forces in the parliament, such as the independent-minded Samopomich Party or the cross-party group of young and reform-oriented MPs who call themselves the "Euro-optimists."

Yet much of Ukraine's political class remains unchanged from the pre-Maidan days. Pushing legislation through parliament often requires support from shadowy power brokers who trade votes for cash and other forms of political influence. Western leaders and institutions such as the European Union and the IMF have repeatedly exhorted Ukraine to cast out its corrupt political leaders.

But the West has limited tools for confronting corruption within Ukraine. The EU has struggled for half a decade to push Greece to reform its clientalistic political culture, with little evident success. The rot in Ukraine runs far deeper, and the West's influence is more limited than in Greece, which was already closely integrated with Europe.

The reality remains that Ukraine's future will be determined as much by the success or failure of internal reform as by Russia's military policies. Even if Russia were to withdraw voluntarily from the Donbass, ongoing corruption in Ukraine would provide ample space for the Kremlin to continue meddling in Ukraine's politics. The current political crisis might result in Ukraine getting a new prime minister in the near term. But stamping out corruption requires not just a new coalition in parliament, but an entirely new set of political leaders, people untainted by the old order. Experiences of other countries in the region suggest that anti-corruption efforts will take years.

The best way to secure Ukraine's future political autonomy and economic prosperity is to help Ukrainians cast out corrupt officials and install governments that are honest and responsive to citizens' demands. It sounds like a straightforward task. The continued influence of corrupt forces in Ukraine's remains not only a problem for Ukrainians, but also a battlefield in the broader contest between Russia and the West.

Chris Miller is associate director of the Grand Strategy Program at Yale and a fellow at the Foreign Policy Research Institute. He is currently finishing a book manuscript on Russian-Chinese relations.