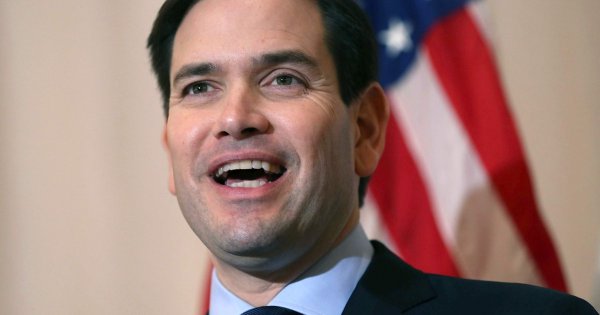 “I’m looking forward to being a private citizen,” Rubio said to CNN today, looking weary from a long and contentious primary season.

Senator Marco Rubio returned to his day job today, attending Senate meetings and meeting with staffers to discuss how he’s going to try and work for the people of Florida in his remaining months in office. Heavily criticized on the campaign trail, Marco Rubio’s voting record has been less than stellar — the worst in the Senate in fact, and his performance in the Florida primary, his home state — reflects just how little the people of Florida think of Rubio.

“I’m not going to be Vice President. I’m not running for Governor of Florida, I’m going to finish up my term in the Senate. Over the next 10 months we’re gonna work really hard here and we have some things we want to achieve. And then I’ll be a private citizen in January,” Marco Rubio said to reporters outside his Senate office today.

Rubio stated to reporters today that he’s hoping to get some work done before the Senate recess, which begins Friday, giving the Florida Senator ample time to reflect on what went wrong in his campaign and how he can make the most of his remaining months in office. Rubio confirmed today what many commentators speculated — that after his crushing defeat in Florida, there’s no chance for Rubio to win another term in the U.S. Senate.

Instead, Rubio mentioned in passing that he’s a “good friend” of Florida’s Lt. Governor Carlos Lopez-Cantera, who he suggested to reporters today that he’d like to see run for his soon-to-be-vacant Senate seat. Rubio has been cautious with his support since dropping out of the race less than 48 hours ago, even as reporters clamor to hear a Rubio endorsement of Ted Cruz or John Kasich – or even Donald Trump, however unlikely that may be. But Marco Rubio is still reeling from the loss in Florida, and despite some kind words for Ted Cruz, he hasn’t spoken much about the future of the Republican party this election.

For his part, Rubio still appears dumbfounded by the loss in Florida — a historic loss in fact, in primary politics, the first time in almost 40 years that a candidate has lost his or her own home state in a primary. Speaking with reporters today and yesterday, it’s clear his campaign still doesn’t quite know where they went wrong.

According to the New York Times, Marco Rubio’s internal polling showed him behind Trump by only about five percentage points, a gap that he could close by some last-minute campaigning. The Rubio internal polls also suggest he’d likely close that gap and overtake Trump before voters started heading to the polls. Like many polls this primary season, Rubio’s internal polls were wrong, and as we saw, Trump beat him handily.

Rubio stated that one of the main factors in his losing Florida may very well have been the media narrative that his campaign was on the outs and that Rubio had little chance in his own home state. No matter the reason, Rubio appears to have taken the loss to heart, and after speaking with advisors, he will not be seeking re-election to the Senate, and he will not be seeking a vice presidential nomination.

Marco Rubio is, as he said today, looking forward to just being a private citizen.