Thanksgiving: The Fliip Side 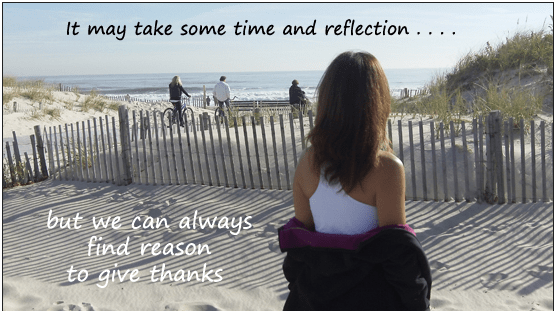 Thanksgiving: The Fliip Side published by Maura4u
Writer Rating: 2.0000
Posted on 2018-11-21
Writer Description: Happiness, Self Leadership and a Better Society
This writer has written 60 articles.

“Gratitude makes sense of our past, brings peace for today, and creates a vision for tomorrow.”

NOTE: This is a 2013 reprint in honor of Thanksgiving. For those seeking to live happy – from the inside out, may the thoughts prove forever fresh.

Thanksgiving. In a season of gratitude, where most are offering thanks for traditional bounties, my contemplation turns to giving thanks for the flip side: things that, at least on their surface, hardly qualify for appreciation.

If your year hasn’t been punctuated by health, wealth, marriage or a new house, you might be hard pressed to find reasons to give thanks. Contrary to seasonal expectations, you might be wading through job loss, medical bills or even an ugly divorce.

I’d hardly call these typical stories for sharing around the Thanksgiving table. But read ahead anyway. A few reflections from my life may help you discover ways to say “Thanks!” in your life, too.

Lack:  For most women, the ability to conceive is a “no brainer.” For me, failure to conceive lasted over a decade. Back then, motherhood came earlier and first pregnancies in a woman’s mid-30s were considered a medical risk.

My inability to conceive took place in the more traditionally minded south. While I focused on sales quotas and marketing plans, female neighbors and friends chatted about diapers and naps. Totally out of place in this social mix, I feared that others felt pity on me, but always hoped they wouldn’t.

Surprisingly, this so-called period of lack would provide future reasons for thankfulness. Averse to debt, I’d worked my way into a certain degree of financial freedom. By the time our daughter arrived, I’d created the option for remaining at home. Realizing I’d be half good at both career and child rearing – but not especially great at either – I was able to leave my corporate job behind.

Years later, I reflected upon certain women who had cut short or totally bypassed a career in favor of becoming young stay-at-home moms. In an ironic twist of fate, they expressed later remorse for having missed out on the freedom and financial independence that accompanied a professional career. With a dozen years of work, travel and some financial success behind me, I had contentment, peace and joy in my unplanned, yet delayed, maternal role.

Illness:  At 28, I looked like a corpse and concealed a hideous scar that ran across my neck. In its earlier stages (complete with metal staples exaggerating the effect), I could have launched memories of Frankenstein flicks or caused some to wonder if I’d failed at a suicide attempt.

That long, noticeable, red surgery scar marked full removal of an overactive thyroid. Previously misdiagnosed as a brain tumor and a heart problem, the illness had left me exhausted, hyperventilating and wondering how I could push myself through another 12-hour day at work.

You might wonder how being sick could possibly provide reasons for giving thanks. Yet in truth, my infirmity proved golden. Who, after having endured an illness and/or disability, would have reason to judge, malign or mock another?

Nobody welcomes illness and the sense of the powerlessness it can bring, but the experience caused me to empathize and relate to the frailties of others. An unlikely candidate for mocking others, I know that enduring my illness wiped away some hidden areas of judgment. Scar or not, I can say thank you for this personally enriching gift.

Abuse: Abuse comes in all forms, from verbal and emotional to social, physical and even sexual. Never pretty, it instead reveals the baser nature of man.

Oddly, I believed I was one of the “lucky ones,” who avoided the statistics of both sexual abuse and rape. Yet a stressful encounter in my late 30s reminded me of a painful, but suppressed past, that gnawed at me through my first fifteen years of marriage.

As a very young child, I was the object of sexual abuse. In typical fashion, the abuse was delivered at the hands of a family friend. I later learned that the same male predator was charged with similar behavior by another young girl, possibly two. Surprisingly, when my memories returned and their confirmation became clear, I was relieved rather than offended.

I was remarkably happy to discover the source of my nagging anxiety. Immediately, I offered a prayer of forgiveness for a mentally ill man who did not know what he was doing. Flipped on its side, this encounter with sexual abuse gave me opportunity for forgiveness, closure and personal freedom.

Infertility, illness and childhood sexual abuse may not provide typical conversation for the Thanksgiving table. But my experiences demonstrate how we can find non-traditional reasons to give thanks.

Empathy, forgiveness and freedom are just some of the many rewards to be derived from trying times. Though not always acquired through simple or otherwise sought-after means, they can provide unique avenues and creative ways to say “Thanks.”

If you’re struggling with Thanksgiving this year, be of good cheer. May you join me in discovering the flip side of offering thanks this holiday season.

Maura is an International Speaker on Self Leadership and Emotional Intelligence