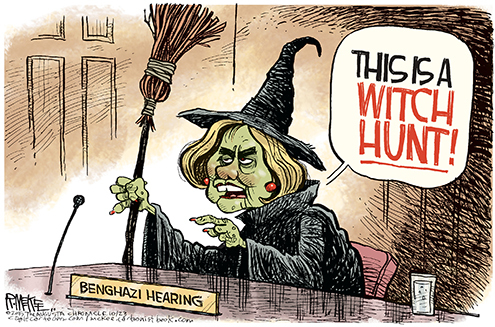 A list of all the people that went to jail during the Hillary email and Benghazi investigations published by Oan
Writer Rating: 2.0000
Posted on 2019-04-08
Writer Description: Articles
This writer has written 117 articles.

• Mayor Patrick Cannon – Charlotte  NC. Arrested less than a month ago for influence peddling and bribery.

ï‚§ CA State Senator Leland Yee. Malkin writes  ‘Yee made a decades-long career out of sanctimoniously demonizing gun owners and railing against the Second Amendment. He was arrested this week on corruption charges after an FBI sting found probable cause to believe Yee had conducted wire fraud and engaged in a conspiracy to deal firearms without a license and illegally import ../../../../articles/2014/q2/list-of-indicted-democrat-officials-grows-rapidly/firearms._rsquo.css;

ï‚§ PA State Senator LeAnna Washington. The report cites  ‘This week  a judge ruled that the Keystone State could proceed with a trial against Washington…She is charged with felony theft of services and felony conflict of interest. More than a half-dozen former employees blew the whistle.’

ï‚§ **RI House Speaker Gordon Fox**. The researchers write  ‘The powerful Democrat announced last weekend that he is stepping down from office after FBI raids on his home and work offices. Fox is the target of several criminal investigations by the US attorney’s office  the FBI  the IRS  and state police.’

ï‚§ CA State Senator Ronald Calderon. The account reveals Calderon was  ‘hit with a 24-count federal indictment for bribery and corruption. His brother also was charged with multiple counts of money laundering and influence peddling.’

ï‚§ **NY State Rep Bill Scarborough**. The report says  ‘The FBI and state authorities raided his home and offices as part of a probe into his travel-voucher practices.’

wake up. Hillary is guilty as hell. She just wasn't good enough to cover her tracks