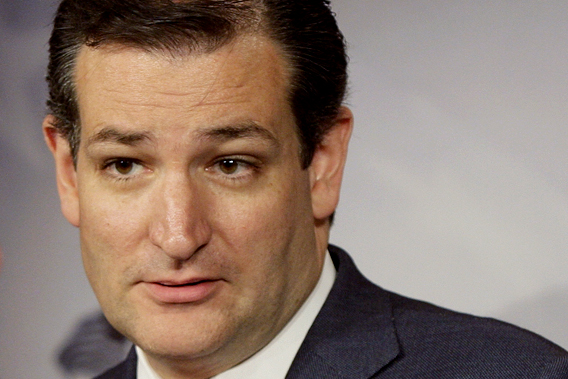 "We need to empower law enforcement to patrol and secure Muslim neighborhoods before they become radicalized," Cruz said in a statement issued after the attacks, which killed at least 32 people and wounded dozens.

Cruz spokeswoman Alice Stewart later said there needs to be a robust law enforcement presence in American neighborhoods where many Muslims live.

"We know what is happening with these isolated Muslim neighborhoods in Europe. If we want to prevent it from happening here, it is going to require an empowered, visible law enforcement presence that will both identify problem spots and partner with non-radical Americans who want to protect their homes," Stewart said. She gave few other specifics.

"Local, state and federal law enforcement agencies all have divisions that target threats like drugs, gangs, human trafficking and organized crime. Radical Islamic terrorism is a significant and growing threat in this country, but this administration refuses to recognize it because they are afraid of being labeled ‘politically incorrect,’” Stewart said.

Cruz said: "For years, the West has tried to deny this enemy exists out of a combination of political correctness and fear. We can no longer afford either. Our European allies are now seeing what comes of a toxic mix of migrants who have been infiltrated by terrorists and isolated, radical Muslim neighborhoods."

Those efforts involved disbanding a controversial and secretive unit of plainclothes detectives that mapped the Muslim community, spying on businesses, mosques and documenting conversations.

The unit, which was revealed in news reports, had angered Muslims in New York who felt they were targeted solely because of their religion. While widely praised by some, the unit had never generated a terrorism lead and was doing little by the time de Blasio and New York Police Commissioner William J. Bratton got rid of it.

Earlier this year, the New York Police Department agreed to settle a pair of federal lawsuits that claimed Muslims were the target of baseless surveillance and investigations because of their religion. In the settlement, the NYPD admitted no wrongdoing but paid attorney fees. The settlement, which has yet to be approved by a judge, called for a civilian monitor who could review terrorism investigations and codified certain policing practices. The NYPD has said the settlement doesn't make the city any less safe.

“We challenged the NYPD’s surveillance of Muslims for violating the Constitution’s guarantees of equal protection and religious freedom,” said Hina Shamsi, director of the American Civil Liberties Union’s National Security Project. “It was also divisive and alienated Muslim communities from law enforcement. The settlement in our case should send a forceful message that discriminatory police practices are unlawful and unnecessary."

In response to Cruz campaign’s statement, Monica Klein, de Blasio's deputy press secretary, said in an email: “This is blatantly false. Now we know why everyone is calling Ted Cruz a liar.”

Reaction from elsewhere on Cruz's statement about securing neighborhoods was swift and harsh.

"It's really beyond belief that you have one of the leading presidential candidates calling for law enforcement to target religious communities totally based on the fact that they are of a particular faith," said Ibrahim Hooper, a spokesman for the Council on American-Islamic relations.

"In normal times, this would be the sort of thing that would disqualify someone from running for dogcatcher, much less president of the United States. We call on voters to reject this. It just shows you what happens when you appoint policy advisers like Frank Gaffney and Jerry Boykin to your team," he said.

Last week, Cruz named a 23-member foreign policy team that includes Gaffney, who is known for holding anti-Muslim views, and Boykin, who has said that there should be no mosques allowed in the United States.

Last year, Cruz introduced legislation that would bar refugees dominated by terror groups. The legislation failed. Shortly after the terrorist attacks in Paris in November, Cruz said Muslim refugees from Syria should not be allowed in the United States because the Obama administration cannot determine whether refugees are aligned with the Islamic State. Cruz on Tuesday said the United States should immediately stop admitting refugees from "countries with a significant al-Qaeda or ISIS presence," using an acronym for the Islamic State.

Cruz had said there is "no meaningful risk" of Christians committing terrorism, and the United States should open its borders to displaced Christians from Syria and the Middle East.

In an interview with Bloomberg News in November, Cruz was asked whether he believes Islam is a violent religion or if it is being perverted.

"It is not my role to be rendering judgments on religious faith,” Cruz told Bloomberg News. “There are indisputably millions and millions of peaceful Muslims across the globe who are horrified at how terrorists are perverting their faith. ... But when President Obama stands up and says the Islamic State is not Islamic, that's idiocy.”