Libertarians Hate This: The Entrenchment of the Liberal Corporate State 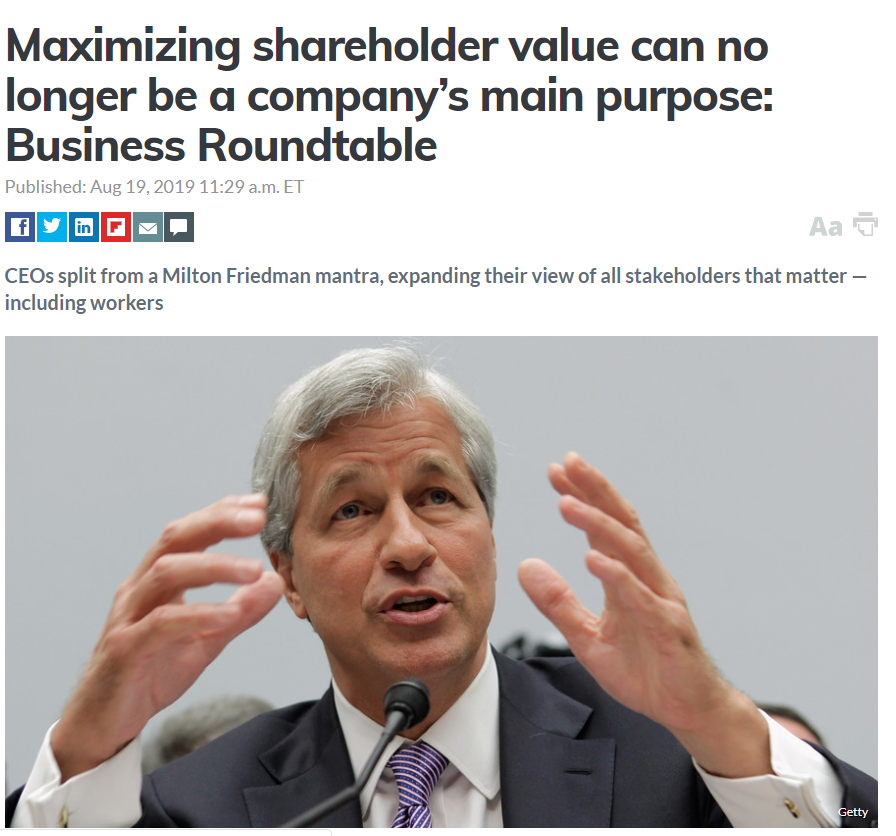 Libertarians Hate This: The Entrenchment of the Liberal Corporate State published by Student000
Writer Rating: 0
Posted on 2019-08-19
Writer Description: Just My Thoughts On Things
This writer has written 9 articles.

Thus, the final nail was put in the Libertarian coffin.

I awoke this morning to be greeted with this headline from Market Watch: Maximizing shareholder value can no longer be a company’s main purpose: Business Roundtable.

To summarize the underlying ideas of what's going on: Corporations are increasingly converging and are beginning to re-evaluate the primacy of shareholders and profits over ideology, that ideology being the current ideology of the current ruling class, i.e., neo-Liberalism.

Two predicition can be drawn from this development: 1. The fact that major Corporations have the luxury to ignore profits is indicative of them being monopolies. 2. Liberals will increasingly use corporations as a means of authoritatively enforcing social policy.

What these two points mean is that it is now imperative for the right to use the government as a means of restraining Liberal corporate power. This Libertarian fantasy of market-enforced volunterism is and always has been a myth. This is especially the case for major corporations such as Youtube. Youtube is a corporation which essentially operates at a deficit and is merely being propped up by it's parent company, Alphabet, as a means of dominating the online digital market. Being that Youtube draws in no profits, it elliminates any means by which the public may be able to restrain corporate power, i.e., by withdrawing their wallets. This is why we're seeing Youtube becoming increasingly censorious and actively promoting Left-wing ideas. Youtube does not exist as a means of generating profits, which is what corporations have traditionally existed to do. Youtube exists to generate culture and to shape public sentiment to further Left-wing agendas. We're seeing the rise of a new form of Corporation, one which has grown so much in size that it can often times be seen as virutally indistinguishable from a state. In fact, it could be argue that Google and Facebook are perhaps two of the most powerful entities on the planet, capable of dwarfing the influence of any Nation-State in terms of influence. The fact that these corporations are effectively tyrannies, as all corporations fundamentally are, just makes it worse.

Please do not raise the fallacy that Corporations don't = capitalism because they need the state to exist, and are thus, not Libertarian. Capitalism itself could not exist without the state. The state is the eternal factor in all major Civilizations, whether they be Tyrannical (Private) or Democratic (Public). The relevant question is which individual or group holds state power. As of now, it is undeniably the Left and the offspring of Leftists Academia in the corporate world.