Part 1, The Death of the Marketplace of Ideas. 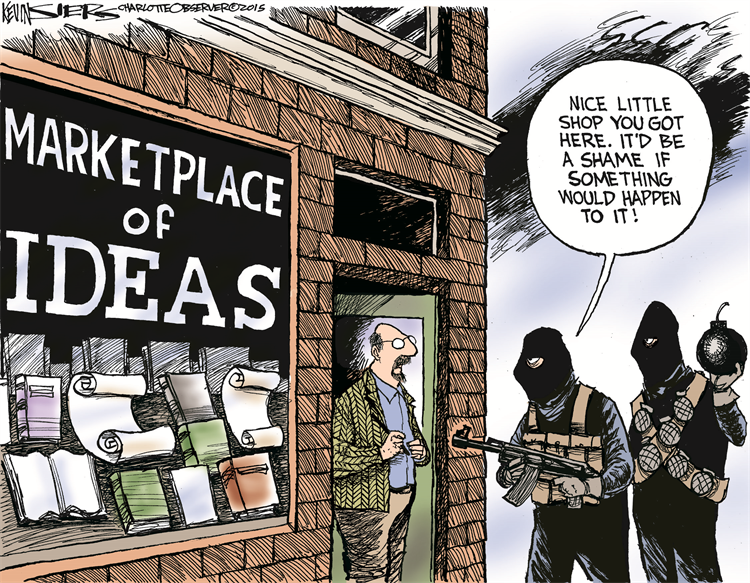 Part 1, The Death of the Marketplace of Ideas. published by GKR
Writer Rating: 0
Posted on 2019-09-19
Writer Description: The only thing I hate more than nazi's is nazi enablers.
This writer has written 1 articles.

To my libertarians brothers.

Every part of me wants to look at you like an ally. I do. I love freedom, I love democracy, but I'm not jaded by some misguided idealism. At the end of the day my goal is more freedom for more people. It is my central reason for acting, talking, and arguing with anyone. I want to convince them that what I want leads to more freedom.

So let's talk about the marketplace of ideas. Now to acknowledge some commonground, I agree with libertarians on many fronts. I think when possible we should avoid letting the government be the arbiter of free speech but as most would agree, some speech needs to be tempered. The first amendment in the US already restricts certain types of speech. The most common example is the yelling of fire in a crowded theater. However, in the United States history as a country there has been other restrictions that made a great deal of sense and fit within constitutional parameters.

So let's talk about the Fairness Doctrine. The Fairness Doctrine was introduced by the FCC in 1949. It required news broadcasters to present controversial stories in a way that was honest, equitable, and balanced. The goal was to have controversial ideas presented and discussed in a way that informed the public and to present them accurate information on a variety of topics. The constitutionality of this was challenged in 1969 and it was determined that the FCC had the right, but not the obligation to enforce the fairness doctrine under the first amendment.

The demise of it came in 1987 underneath Reagan. Many attribute the demise of this doctrine as one of the main driving factors behind  the intense polarization in the US. The US was not always as polarized between parties as we are today. The graph below shows that 1992 was the first year without ideological overlap between the two parties, merely 5 years after the Fairness Doctrine was revoked. Fox News showed up 9 years after the repeal and embraced the 24 hours news cycle interjected with unbalanced commentary shows like the O'Reilly Factor some left wing organizations like CNN did similar unbalanced commentary shows and as a result of no requirement of fairness, equity, or honestly. So you would have people like Bill O'Reilly go on and call an abortion doctor "George Tiller the Baby Killer" something that would not have been possible under the previous FCC rules.


And here is where we started to learn some hard truths that we feel even more today. George Tiller was assassinated after O'Reilly referred to him as "Baby Killer" 24 times on national television. How many times have you talked to an antigun person who didn't know even basic differences between an AR-15 and an AK-47? How many times have you talked to someone whose antiimmigrant who tried to tell you drugs and crime are relentlessly flowing across our border?

Which brings us to the marketplace of ideas. Pick your topic, it doesn't matter what. It's rife with people not knowing basic facts about the thing they claim to care about. What is the cause of this? The answer is that media companies like CNN and Fox News make money by selling you fear, terror, and comfort. They keep you glued to the TV to find out the next horrible thing that happened and they make sure to keep you on their station by not challenging any of your preexisting views.

And that my friends is where the marketplace of ideas die. Fake news spreads like wildfire, while real stories that are comparably tame get buried. When news and media companies have untempered profit on their mind, their goal is to get you to watch as much as possible for as long as possible and they found the most effective way to do this is to sell you that combination of fear and comfort. When otherwise people are getting their information from dishonest actors, the marketplace dies. We can't have a solid fact based debate when people can't agree on the facts and major companies are making oodles of money by spreading misinformation to as many people as possible. In the marketplace of ideas the compromise should exist between unifying differing philosophical approaches to the role of government.

Look at healthcare. Most people agree that our current system sucks. An honest conversation would probably involve someone like Bernie Sanders saying "Government run healthcare will cost the taxpayers less while giving them more!" while someone like Ron Paul might argue that while that is true, a true free market can give it at an even lower price. Then maybe they would have disagreement over whether the government should guarantee healthcare as a right. The conversation shouldn't be "I think healthcare is a human right" and the counterpoint being "You're a socialist who wants us to eat rats like they do in venezuela"


I know the apprehension we have with letting the government regulate speech, but this light touch approach the FCC adopted in 1949 worked really well and we are now knee deep in the effects of its absence and I think most would agree that if nothing else, we had a healthier media and political climate prior to the revocation of the Fairness Doctrine. The founding fathers were scared of what would happen if the uneducated masses were responsible in electing a president. They knew that for democracy to survive we need to have a well informed group of people making decisions, in their time they viewed that as the responsibility of the educated. In our time we want everyone to have the right to vote and in that vein, it's our duty to make sure that as many people in our country are receiving their information in an honest, equitable, and balanced manner in order to safeguard freedom and democracy. Bring back the fairness doctrine!