'My Big Fat Greek Wedding 2' review: Same characters, not as much fun 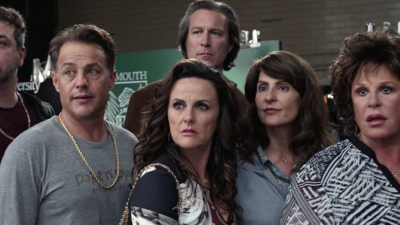 Back in 2002, "My Big Fat Greek Wedding" became a bona fide cultural phenomenon, a romantic comedy that mined the cultural specificities of the Greek heritage of unknown writer and star Nia Vardalos. The film picked up an Oscar nomination for Vardalos' original screenplay, everyone began adding "My Big Fat" in front of various nouns, and we all learned a thing or two about the versatility of Windex. Fourteen years later, Vardalos and gang are back again for another wedding, but this time, it's to drastically diminished returns.

The screenplay feels as if it was written the year after the first film's success, just with a few jokes about Facetime inserted for 2016 topicality. The rest of the jokes either don't land or feel about as fresh as a two-day old spanakopita. The first half of the film is incredibly rough, a stilted, awkward affair where all the timing is off and none of the half-hearted physical comedy or Greek puns truly land.

Part of this is due to Vardalos' performance. She plays Toula with a dull, listless, deer-in-the-headlights gaze. This is clearly a choice for the story — she's lost the romance and zest in her relationship since being a mom to teenager Paris (Elena Kampouris). At the urging of her Aunt Voula (absolute MVP Andrea Martin), who reminds her she was "a girlfriend before a mom," she finally puts on makeup and makes out with her husband, the WASPy lumberjack Ian (John Corbett). This seems to wake her up a bit.

Still, the film has much ground to make up after the rocky start. While the marketing for the movie seems to suggest that her daughter is the one getting married, that's a bait and switch. In actuality, it's Toula's parents who are having another big fat Greek wedding, after discovering that their Greek marriage certificate was never signed. Once the wedding swings into gear, "My Big Fat Greek Wedding 2" finally finds its footing.

Vardalos, as a writer, chooses to celebrate Greek culture by consistently placing the family as other, using uptight blonde white women — judgmental neighbors and snooty wedding planners — as the foils to illustrate their ethnicity as different or distasteful, their habits and customs as weird or strange. Eventually, Toula stands up to them and they accept their Greek neighbors, but in the melting pot of America, it seems like this exploration of culture sets different kinds of people apart as much as it brings family together.

There's also the matter of the film's reliance on traditional marriage as a cultural institution and carrier of tradition and ritual. While some of the female characters express hesitation about it, ultimately, they all must embrace this type of coupling in order to come together. Not to mention the antiquated ideas about sex ("keep your knees together," they admonish Paris) paired with the aggressive TMI about Aunt Voula's intimate life.If you liked the first film, there's more to enjoy from these characters, and the devoted long-term relationship between Toula's parents (played wonderfully by Lainie Kazan and Michael Constantine) has its truly sweet moments. But there's nothing fresh brought to the table, and it lacks the element of surprise and discovery of the first film. It's just another 90 minutes with this group of characters, and unfortunately, that's not enough."My Big Fat Greek Wedding 2" — 2 stars