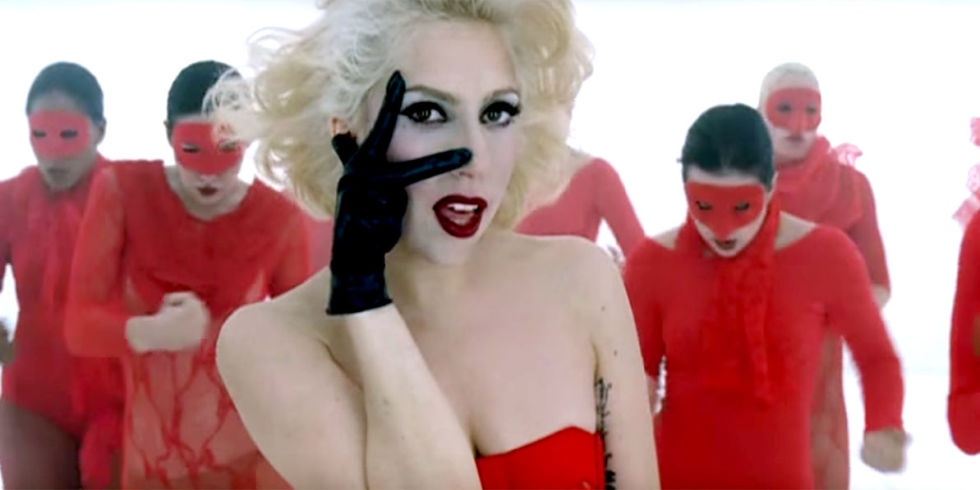 If there's anything we've learned from her music videos, it's that Lady Gaga is no shy girl. To celebrate her 30th birthday today, we've rounded up her most iconic, bizarre, memorable, and controversial videos over the years. Scroll through to watch them all.

An early hit, this was the music video that helped establish Lady Gaga as an avant-garde artist, especially with its unique outfit choices: the bleach-blond bangs, the bow made out of her own hair, and that metallic mosaic mask. And emerging from a pool in a leotard between two regal Great Danes is one of the greatest music video entrances we've ever seen.

With more than 675 million views to date, "Bad Romance" is Gaga's most-viewed music video on YouTube, and it's obvious why. It boasts an iconic dance sequence (which we all tried to mimic at least once) and an insane wardrobe by Alexander McQueen, featuring those one-of-a-kind armadillo shoes that Gaga helped make famous.

This seven-minute feature is more mini movie rather than music video, starring True Blood's Alexander Skarsgård. It features an elaborate performance about love and revenge in a luxurious mansion, but her use of crutches and a wheelchair as props caused an outcry by the disabled community. Gaga later defended the decision, saying it was a metaphor of what artists will do to "fame-whore themselves."

Gaga gives an underground tribute to New York City as she and her crew dance through subways and parking garages clad in denim, leather, and studs. The video is directed byJoseph Kahn, who's also worked with Taylor Swift and Britney Spears (for her "Toxic" video). Similarly, Gaga rolls around in nearly nude sparkles here too.

"Alejandro" was highly criticized for being anti-religious and overtly sexual, but it's the controversial (and bizarre) aspects that make it hard to forget. If you look closely you'll find some Madonna influences, which some read as a complete rip-off, especially with the machine gun bra meant to resemble Madge's cone bustier. Despite its controversial imagery, directorStephen Klein said the video is about "a woman's desire to resurrect a dead love and who cannot face the brutality of her present situation."

What happens when you put two queens together on a hit song? You get an epic nine-and-a-half-minute music video with unforgettable costumes, a dance routine that everyone wants to learn, and a badass plot that rivals Orange Is the New Black. Gaga and Beyoncé make the perfect duo in this vid.

Written by Gaga herself and directed by fashion photographer Nick Knight, the video for this self-empowering song takes an extraterrestrial note with a kaleidoscopic alien birth at the intro that only Mother Monster could've thought of. "Zombie boy" model Rick Genest and some very sharp prosthetic cheekbones also make an appearance.

Set on a foggy city sidewalk and fire escape, this is one of Gaga's more minimalist videos. She appears alone with legendary saxophonist Clarence Clemons from the E Street Band and dances solo as he plays on a stoop. Unfortunately, Clemons passed away shortly after the video was released. But when he was still suffering from his stroke a few days prior, Gaga gathered her fans to pay a tribute to the musician through tweets and videos.

The singer continues her penchant for multi-narrative videos with this one, which guest stars her current fiancé, Taylor Kinney, as her love interest. She plays a disheveled diva on a dirt road, a ghost bride, a mermaid in a bathtub, a barefoot beauty in a cornfield, and her own male suitor, just to name a few.

Gaga directed this music video herself for a more "autobiographical" take on her music, she told Vanity Fair in 2011. The scenes recount her struggles as an artist, including the moment she was dropped from her first record label, Island Def Jam. Fun fact: The nurses in the psychiatric ward scene are wearing Calvin Klein uniforms and Saint Laurent shoes.

The introductory video to ARTPOP was a fitting reflection to the rest of the album, which represented Gaga's new take on her music. The images don't fall short of her usual strangeness and shock factor, but it seems a bit more elegant and artistic than her fans had seen prior. Some say that she references famous moments in art history, with one example being the tribute to Botticelli's Birth of Venus with the shell bra outfit.

Perhaps her most moving and emotional music video to date, the song featured in The Hunting Ground documentary relays the story of sexual assault and abuse on college campuses. Gaga herself doesn't star in the video, which instead features students on college campuses across the country. The clip is reminiscent of her emotional performance at the Oscars this year, where real-life survivors joined her on stage.