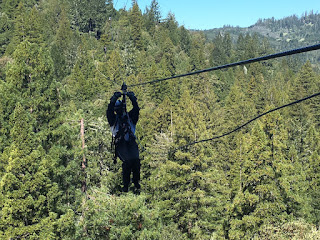 I've been spending the past couple of days in the heart of California's wine country visiting the city of Santa Rosa, where I've been discovering all kind of amazing, active adventures that visitors can partake in when they're not visiting the local vineyards. It turns out, this part of the country is not only blessed with lots of great places to grow grapes, but some fantastic outdoor adventures too, making it the perfect destination for those who want to mix an active escape with some relaxing downtime.

After a very active day yesterday, I was eager to get my last day in Santa Rosa underway. With a busy schedule ahead, I knew I'd have to keep moving if I wanted to take it all in, but I much prefer a packed, active schedule over too much downtime on the beach or sitting by the pool. So, after a light breakfast, I hit the road early for the town of Occidental, which sits roughly 40 minutes from Santa Rosa. My destination was Sonoma Canopy Tours, which is yet another option for those looking to spice up their trip with an adventure.

Sonoma Canopy Tours opened in 2011, and has been a popular attraction ever since. Their original zipline course includes three different lines – the longest of which is 800 feet (244 meters) in length – as well as a number of sky bridges spanning between platforms in the trees. It remains a very popular outing with visitors, who often reach speeds in excess of 25 mph (40 km/h) as the fly through the magnificent redwood trees that are so common in this area.

But I wasn't here to do the original course. I'd come to take on the new Challenger course, which just opened last fall. It includes a single line that exceeds 1500 feet (457 meters) in length, on which zipliners can reach speeds of more than 40 mph (64 km/h). That's the first line of the day, and it is one heck of a way to get things started.


The second and third ziplines on The Challenge course aren't nearly that long, but they are still quite fun. But to spice things up even further, the sky bridges on this course have been built to test your balance and determination as well. Each of them has a unique design that will offer different challenges for crossing, and while you're never in any real danger – you're clipped in the entire time – it is still a bit unnerving to walk out into open air. 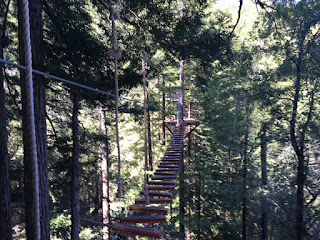 Perhaps the most fun part of the entire course were the two rappels that must be made along the way. The final one returns you to your starting area, and is more than 40 feet (12 meters) high. While I've done plenty of rappelling myself in the past, not every member of my group was quite so experienced. This led to a few interesting moment where our friendly and knowledgeable guides had to coax them off the platforms a bit.

All told, The Challenger course takes about three hours to complete, but it was definitely a fun experience. Families in particular will enjoy a visit to Sonoma Canopy Tours, as it is something that everyone can enjoy. It also provides a nice adrenaline rush before heading out to any of the local wineries for the afternoon.

By the time I wrapped up my canopy tour, I was more than ready for some lunch. So, I hopped back into my car and headed back to nearby Sebastopol for a visit toWoodhouse Brewing Company, a local beer brewhouse that is giving the wineries a run for their money. I had a chance to test out a flight of seven different beers, and came away very impressed. The company's founder – Seth Wood – has an extensive background in wine making, and he brings that same level of sophistication and care to his beers as well. I especially enjoyed the Sour Farmhouse, which is light and tasty with some surprisingly fresh tastes. The food was excellent as well, and with plenty of outside seating, it made for a nice place to relax after swinging from tall trees all morning. 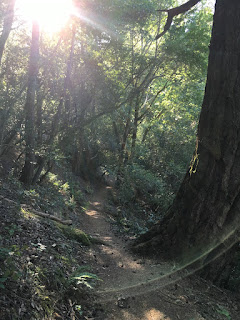 After lunch, I was ready to burn off some calories, so I changed into my trail running gear, and drove out to Armstrong Redwoods State Natural Reserve. This beautiful wilderness is another wild and remote place that can be found about 45 minutes from Santa Rosa. The multitude of trails are great for hiking, and give visitors a chance to wander under the spectacular redwoods.

Not content to just go for a hike however, I set off on a run that was made all the longer thanks to me getting lost on some of the more remote trails. I also discovered that some of those routes wander up and down steep hills, particularly if you want to get away from the crowds and reach the backcountry. Be prepared to work you ass off to reach those places, but it is more than worth the effort. Some of the views from the high ridges are amongst the best I've seen here in California, and once I got away from the visitor center, I seldom rand into anyone else on the trail.

There is definitely something magical about trail running under the redwoods. It was a bit like visiting the forest moon of Endor from Return of the Jedi, which was filmed in a very similar setting. Those giant trees are impressive to behold, and have a way of making you feel very tiny. Especially as you're running up a steep trail, drenched in sweat and gasping for breath.

After a couple of hours in the Armstrong woods, I managed to stumble back to my car, and get on the road to Santa Rosa once again. By now, it was early evening, and I had another dinner appointment to make. I barely had time to return to my room at the Flamingo, grab a shower, and head back out. My destination for the evening wasBelly Left Coast Kitchen, a place I had been told had excellent food cooked up by owner and executive chef Gray Rollins. Gray is known as the "rock chef" because he has often served as the tour chef for a number of major bands, including Motley Crüe, KISS, Katy Perry, the Black Eyed Peas, and many more. 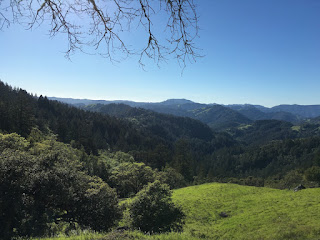 When I arrived at Belly, I found a loud and raucous crowd. Apparently the restaurant has a popular happy hour, and it was most certainly jumping. I found a spot at the bar, ordered another Sour Farmhouse beer from Woodfour and some foot. The menu had plenty of great options to choose from, and to be honest I had a hard time selecting what I wanted. I finally settled on macaroni and cheese with beef brisket, which was very tasty indeed. On my way out though, I caught a glimpse of the fish tacos, which looked delicious too.

After another long, and busy day, I was ready to head back to the hotel and crash for a bit. My legs were definitely feeling the combined effect of yesterday's mountain bike ride and today's long trail run, so some downtime was in order.

Tomorrow, I'll drive back to San Francisco and catch a flight home. But I'll return with a new appreciation for the Sonoma and Napa region of California. While I already knew that those places were wonderful destinations for wine lovers, I now see there is plenty to offer active and adventurous travelers too. I think a return trip will definitely be order and next time I might even make it to one of the wineries.

Find out more about what Santa Rosa has to offer ant VisitSantaRosa.com.