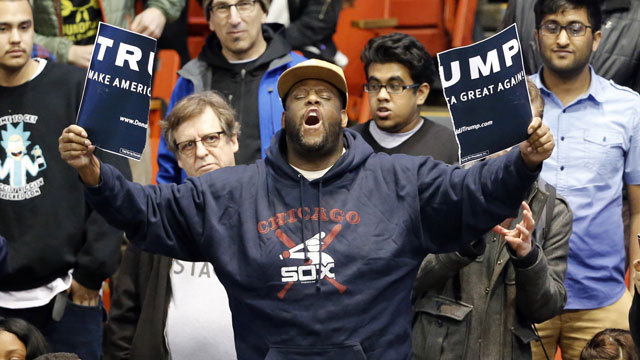 CHICAGO -- A Donald Trump rally that attracted thousands to the University of Illinois at Chicago was abruptly canceled Friday night amid his campaign's security fears, sparking shouting and scuffling between the candidate's fans and anti-Trump protesters.

Chicago police said two officers were hurt, including one who was struck on the head with a bottle. At least two other people were taken to a hospital with minor injuries, according to news reports. Five people were arrested.

The rally was called off about a half-hour after the scheduled 6 p.m. start time, after thousands of Trump fans and anti-Trump protesters packed into the free event, which required online registration. Thousands more gathered outside, surrounded by a police perimeter, and people became more vocal as the starting time approached.

Chaos broke out when the cancelation was announced, according to media reports from inside the pavilion. CBS News said reporter Sopan Deb, who covers the Trump campaign, was detained by authorities.

“I have never seen anything like it. It’s amazing,” CNN’s Jim Acosta said. The network said approximately 8,500 people were at the rally.

Violence has become a recurring theme at Trump events, with protesters beingbeaten, shoved, kicked and verbally abused. Trump has encouraged supporters to attack protesters, saying they should "hit back" more often, and has offered to pay legal fees if they do.

Clashes between protesters and Trump supporters at a St. Louis rally earlier on Friday led to at least one injury and 32 arrests. On Wednesday, a Trump supporter at a North Carolina rally sucker-punched a protester and was charged with assault and battery.

Trump said later Friday on CNN he had "no regrets" about his tough talk, including a remark that protesters, in the old days, would be "carried out on stretchers."

"You can't even have a rally anymore in this country," Trump complained on MSNBC shortly after the Chicago cancelation. He added: “There’s a lot of anger in the country, and it’s very sad to see.”

In a subsequent appearance on Fox News, Trump told Greta Van Susteren it was "a good decision" to cancel the rally.

"I am a unifier," he said, even though thousands had gathered at the event to protest him.

The rally quickly devolved into chaos after the cancelation was announced.

“Tonight’s rally will be postponed,” a Trump campaign staffer announced, as a sea of protesters celebrated and tore apart Trump signs inside the university pavilion.

Chicago police said in a statement they played no part in the decision and were working with university police and the Secret Service "to protect people's First Amendment rights and ensure everyone is able to disperse the area safely."

Acting Police Superintendent John J. Escalante said at a news conference Friday night that commanders weren't consulted by the campaign and "were kind of taken by surprise" that the event was called off. University police also said they had no part in the cancelation.

Trump's campaign, however, said the decision was made "after meeting with law enforcement."

“Mr. Trump just arrived in Chicago and after meeting with law enforcement has determined that for the safety of all the tens of thousands of people that have gathered in and around the arena, tonight’s rally will be postponed for another date," a statement from the campaign said. "Thank you very much for your attendance, and please go in peace.”

Announcements over the public address system urged attendees to leave, but crowds lingered for about half an hour.

Disappointed Trump supporters could be heard on video feeds criticizing "liberals" and Black Lives Matter supporters for the cancelation.

An estimated 2,000 protesters had already gathered in a designated zone just outside the pavilion when doors to the rally opened at 3 p.m. A Chicago police officer on bike patrol estimated that people had been arriving as early as before 2 p.m.

Chicago suburb of Rolling Meadows on Friday night, where rival GOP candidate Ted Cruz also is scheduled, but was "politely declined," according to the local newspaper Daily Herald.

Some of Trump's Republican rivals blamed Trump for the disorder, as did Chicago Mayor Rahm Emanuel (D).

Cruz told Hewitt “there’s no doubt that a candidate bears responsibility for the culture that is set from the top.”

Emanuel, in a statement that took a thinly veiled jab at Trump without naming him, condemned "hateful, divisive rhetoric that pits Americans against each other" and praised city police for their work "in unexpected circumstances."