What Are Bollards, and Why Are They So Beautiful? 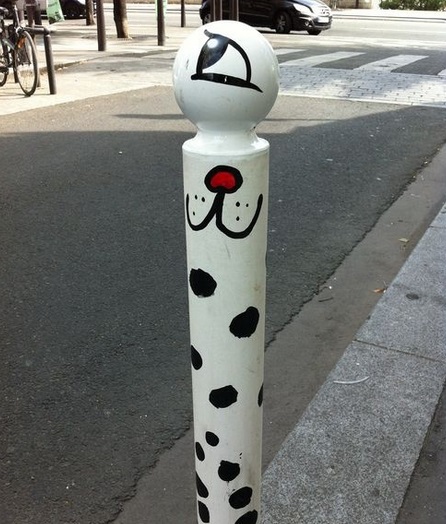 What Are Bollards, and Why Are They So Beautiful? published by Evanvinh
Writer Rating: 5.0000
Posted on 2016-04-09
Writer Description: Evanvinh
This writer has written 733 articles.

Once you start looking for bollards, you will find them everywhere.

How does one become a bollard photographer? For Andrew Choate it all started inadvertently, when he was living in California's Canyon County—“an abysmal suburb where everything had been built within the past 20 years,” he says.

On bike rides that would take him on path behind a bunch of strip malls, Choate would photograph the backs of buildings, and eventually he started noticing that the strongest compositional elements in those shots were the bollards. Soon, he started taking photos of bollards on purpose, and that was the first step towards a bollard obsession. What is a bollard? Originally, it was a metal post that was used to moor a ship. In the 20th century, a bollard became a post meant to obstruct cars and other traffic—to separate cars from people, cars from buildings, cars from...anywhere cars shouldn’t be. Become a bollard spotter, and you will see them everywhere.“They’re so easy to not pay attention to,” says Choate, who posts his bollard photos as @SaintBollard on Instagram. “Once you pay attention, the variety and creativity involved in them is so intense.” Anecdotally, English speakers from Commonwealth countries are more likely to be familiar with the term “bollard” than American English speakers, but regardless, bollards appear across the world, usually in cities, which often have particular bollard styles.

Berlin bollards, Choate has found, are different from Paris bollards. In New York, bollards are most often found flanking fire hydrants. Wellington, New Zealand, has bollards with their tops curled into the spiral shape of koru plants. For decades, Amsterdam used bollards to distinguish people spaces from car spaces on streets without elevated sidewalks; those bollards have their own special name,Amsterdammertje. In Mexico City, Choate found bollards shaped like little pyramids. Bollards can occur in isolation, or in groups. Sometimes, Choate finds bollards in places where there’s no obvious reason for a bollard to be there—on a hike down a volcano, for instance. Due to security concerns, bollards have become more common in American cities in the past decade or so: after 9/11, federal buildings were more likely to have bollards protecting them. Choate is in touch with urban planning types "who go to Washington and discuss bollards,” he says. Not all bollards are permanently embedded in the ground. Some can be detached, to allow cars to pass through, on special occasions. Some newfangled bollards can sink into the ground. On a recent trip to New Zealand, Choate got video of an electric bollard rising back up into the sunlight. He had never thought he might get live video of a bollard moving up and down, and his mom, who he was traveling with, declared the entire trip worth it. “She was joking and serious,” says Choate. Bollards will do that to you.

Join @SaintBollard to hunt bollards in the wilds of Los Angeles on Obscura Day, a worldwide day of exploration on April 16.