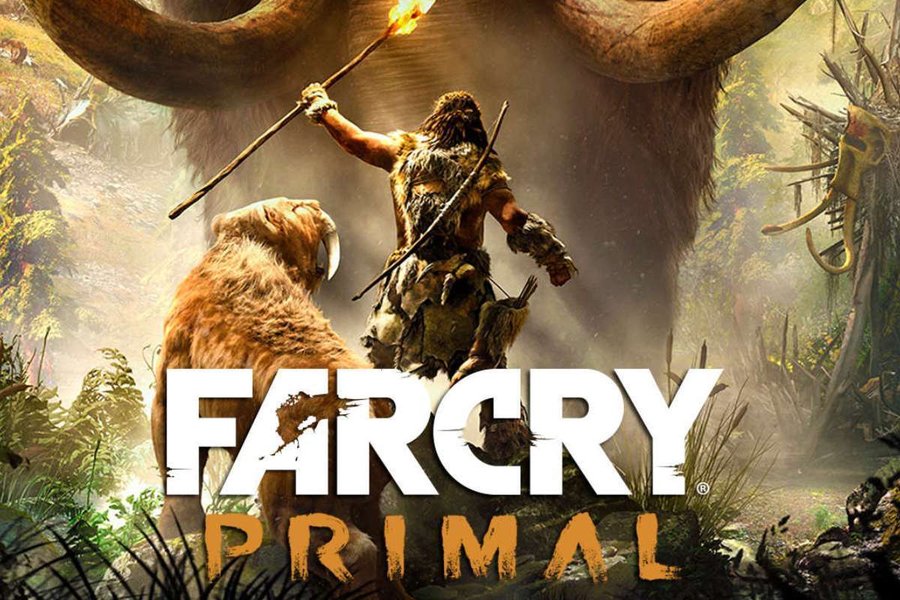 BY LUKE REILLY It’s hard to imagine any other modern first-person shooter series being able to make a 12,000 year trip back in time and arrive there with its identity still intact, but Far Cry Primal has made it work. The series’ now familiar one-man-versus-a-savage-frontier shtick has survived the transition admirably and Primal remains packed with many of the same great gameplay loops that have come to define the franchise, just with a primitive twist.

Primal’s prehistoric, low-tech version of the Far Cry experience feels surprisingly authentic thanks to the game’s completely bespoke language (the simple dialogue is conveyed entirely with subtitles), its large, convincing environment, and its great character design. It’s overflowing with brutal and satisfying close-quarters combat, and the new ability to tame wild beasts also adds a welcome additional layer of tactical choice to assaults on the enemy. It’s undermined, however, by a startlingly basic plot, some disappointingly uncharismatic villains, and often bland mission objectives. The result is a lengthy and competent game with plenty to discover and conquer, but one that unfortunately contains far fewer memorable moments than its forebears.

Far Cry Primal’s 10,000 BCE Stone Age setting takes us back into human prehistory, casting us as a hunter called Takkar, who's part of a fractured tribe known as the Wenja. We also know he has a beard because, well, you can see it in his little icon on the in-game map screen. Unfortunately, that’s more or less all we ever learn about Takkar and, as such, he isn’t an especially engaging or interesting protagonist.

Of course, one of Far Cry’s real fortes is its ability (particularly in more recent instalments) to make up for its ho-hum leads with some truly scene-stealingantagonists, like Far Cry 4’s sadistic Pagan Min or, better still, Far Cry 3’s frighteningly unpredictable Vaas. Regrettably Primal falls flat here too; neither of Primal’s main villains are a patch on a character like Vaas. A considerable letdown for a series that’s carved out a reputation for fascinating and nuanced bad guys.

When Three Tribes Go to War

Takkar's goal is to help establish the Wenja as the dominant tribe in the game’s large world, Oros, which is a mixture of rolling plains, lush forests, and inhospitable ice. To achieve victory over two separate enemy tribes (the Udam and the Izila) Takkar must work alongside several allies to gain the abilities he needs to defeat the leader of each tribe. Unfortunately this elevator pitch is also the entire plot synopsis, because that’s pretty much all there is to Primal. Ubisoft has made a move away from Far Cry’s traditionally more linear storytelling but at a hefty cost.

It took me around 20 hours to get through Primal’s main campaign and just some of the available side quests, and the story does retain Far Cry’s now-signature supernatural flourishes, but it lacks any real twists, intrigue, rollicking set-pieces, drama, or depth. Primal simply hums along sedately until culminating in a pair of standard-issue boss fights.

Supporting characters feel largely absent beyond their handful of associated missions and have very little to do with Takkar outside of cutscenes. It’s a shame we don’t see much of them over the game’s duration because I quite like the secondary cast; from the one-eyed guy who expresses his brotherly respect via swift headbutts, to the one-armed bloke who I suspect peed on me just so he could choose my nickname. Even the clearly traumatised woman with the ear fetish grew on me. They’ll happily join your village and mooch living quarters built from your hard-earned booty, but don’t expect to see them out in the wild helping you when things get dire.

The detailed character design and costumes on these allies is uniformly excellent, though, and they’re covered in cracking facepaint and nasty scars and adorned with various furs, bones, and sticks. Their performances are good too in the context of Primal’s credible, ancient feel. Well, all except for the jarringly odd Evel Knievel caveman who appears to have strolled directly off the set of a secret sequel to Encino Man. I know he’s a nod to Far Cry regular Hurk, and I appreciate the comic relief, but the thick American accent may be jumping the sabre-toothed shark.Far Cry Primal’s strengths instead lie in its reliable gameplay systems. The main thread of “go here, fetch this, kill that” missions lacks variety but I also won’t deny how quickly I became fully hooked on Primal’s well-worn cycle of conquer-hunt-discover-upgrade. There’s a new collection element added to Primal too, in the form of additional villagers for Takkar’s growing community. Villagers are added after successful missions and side quests, or by coming across lost Wenja in the wild and saving them from whatever danger they’re invariably in. The motivation here is that having a larger population will mean more additional resources are collected for you daily and deposited into a daily stash. This cuts down on some of the grind of collecting base resources for weapons, and every now and then rewards you with a handy animal skin you were after for gear upgrade purposes.

Booty and the Beasts

As I found it hard to walk past an unconquered enemy camp, uncollected item, or a potential villager in jeopardy, the story for me quickly took a back seat to devastating enemy outposts, uncovering resources to improve my gear, rescuing random NPCs, and tracking down and taming as many beasts as I could find.

Taming the most dangerous animals Oros has to offer is an integral part of Primal; they’re the best part of Primal’s combat and many of them are rideable – handy considering the size of the world and the obvious lack of vehicles. The Bloodfang Sabretooth, for instance, is supremely strong and incredibly fast and you should focus on attaining its loyalty as quickly as you can, but all the available beasts have certain individual strengths. The leopard will auto-tag nearby animals, and the badger can revive itself from death. Just don’t pet your badger too much. No, that’s not a euphemism. Takkar’s omnipresent owl companion – a deadly, drone-like creature that I relied on often and that can be trained to attack and kill enemies itself, as well as drop pots filled with deadly bees, toxic gas, or fire – is also exceptionally useful: don’t forget about it.

My single biggest irritation about Primal's beast system is the game's staunch refusal to ever let me ride my tiger unless it was at 100% health, an irksome bit of design that may or may not be related to the fact 'Heal Beast' and 'Ride Beast' are annoyingly mapped to the same button.Crushing enemy camps is a familiar experience but they’re generally the best showcase for Primal’s brand of close combat. As usual you can always opt to stalk the perimeters, tag enemies, and sneak in seeking stealth takedowns (although now you can do it with a cave bear the size of a Volkswagen as your obedient backup) but when things get loud Primal demands a dynamic approach to skirmishes. You’ll be swapping weapons often, which gives you a good reason to invest energy in upgrading all your kit. Out of spears? Switch to your club and try to crush your way to the freshly-impaled to retrieve them, or craft some more, if you have enough raw materials in your pack. Swinging wildly but find yourself overwhelmed? Retreat and try to pick off your pursuers as you backpedal by using your bow and nailing a few desperate headshots. It’s worth it to hear the squelch of a professionally-placed arrow.

Primal has wonderful atmosphere but I’d argue it’s more to do with the great sound design than the visuals. Primal is handsome enough on PS4 but I found the quality ranges; the animals, weapons, and character models are exceptional but environmental effects like fire and particularly water are average at best. The audio, however, is top notch; from the unique bark of a badger skulking nearby, to the hum of mosquitos by a river’s edge, to the distant yells of warriors in battle with each other, or nature itself. Primal’s sound plays a huge role in truly placing players alone and 12,000 years in the past.

Far Cry Primal succeeds in transporting the Far Cry formula back in time and comes to the table with a quiver of neat ideas and a dangerous and fascinating open world. The visceral and varied combat is fun, the beast-based gameplay is a winner, and the lure of camp-claiming, gear-crafting, beast hunting, and resource gathering remains irresistible. It’s weakened, however, by a disappointing lack of investment in its story, some often forgettable quests, and its vanilla villains, which unfortunately combine to make Primal feel like a step back from the memorable moments of Far Cry 3 and 4.