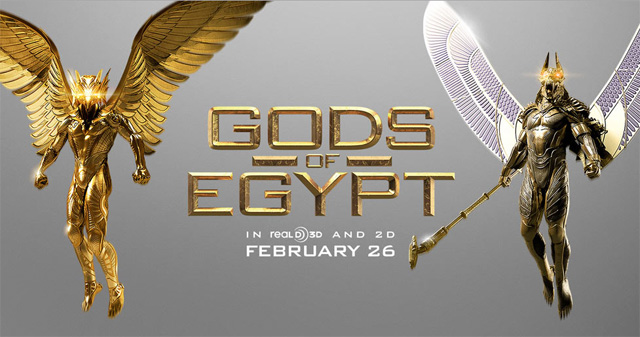 This would-be biblical epic is one holy hot mess

Some movies are so effing awful they're hilarious. Gods of Egypt falls short of that lofty goal. Not because it isn’t effing awful — it so is — but because it pretends to be in on the joke. The actors seem to be cracking up behind they’re caked makeup and grave expressions. Hey, thespians, it's our job to do the mocking.

It's ancient Egypt, folks, a place where all skins are white in contrast to reality and Hollywood’s newly pretended interest in diversity. (#OscarsSoWhite has no relevance here since this is clearly an Academy no-fly zone.) Oscar-winner Geoffrey Rush, having fallen on hard times, plays Ra, the sun god whose head keeps bursting into flames when what should be burning is the agent who signed him up to do this career-crusher. Director Alex Proyas, who showed early visual promise with The Crow and Dark City, has clearly sold his soul to the gods of cheeseball computer-generated effects. No epic in recent times looks more pixalated or exerts more pain on the eyes.

Oh, sorry, I lost track of the plot. Two gods are fighting. Horus (Nikolaj Coster-Waldau), lord of the air, is trying to wrest the crown from his desert god uncle, Set (Gerard Butler), who speaks in a Scottish burr. (That comes with the territory when you hire the Renfrewshire-born actor.) Coster-Waldau rolls his eyes so much at Butler, presumably because of the accent, that he gouges out his eyes. It's Set doing the eye-gouging on Horus, not Butler on Coster-Waldau, but you get my point.

Meanwhile back on land with the mortals, repped by the thieving Bek (Brenton Thwaites), there's a lot of fuss about famine and hard labor. These burdens prompt Bek to steal back one of Horus' peepers, though the lord of air looks quite rakish in an eyepatch, and put the nice dude back in power. If you can't figure out the rest, you've never seen a sword-and-sandals epic. Proyas clearly has, however, and he's cherry-picked the worst of the lot. But what raises Gods of Egypt above all other historically botched FX epics is the stupefying schlock of its visual effects, from Ra's shoddy starship to the digital monsters that take shape like something out of Video Aps for Dummies. Come back, Clash of the Titans, all is forgiven.