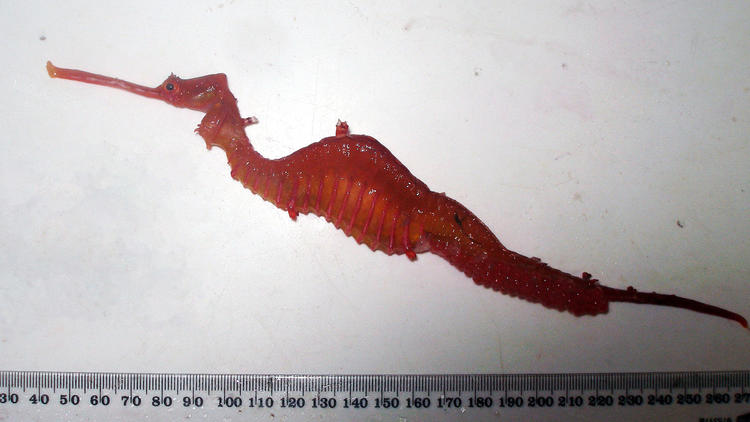 Ruby-red seadragon species spotted in the wild for the first time published by Evanvinh
Writer Rating: 5.0000
Posted on 2016-04-23
Writer Description: Evanvinh
This writer has written 733 articles.

ere are rubies in the sea.

Not gemstones, but ruby-colored seadragons that have been spotted in the wild for the first time, in the waters off Western Australia.

The discovery made by marine biologists from the Scripps Institution of Oceanography confirms that there is a third species of seadragon, an enchanting fish that's often mistaken for a sea horse — if it can be seen at all.

Scientists had long believed that there are only two species of seadragons — leafy and weedy. Both have such great camouflage that they often seem to be invisible.

Scripps biologist Greg Rouse and his colleagues were studying seadragon tissue samples provided by the Western Australian Museum when they began to suspect they had a third species on their hands. Advances in imaging and DNA technology allowed them to prove that their hunch was correct.

Early last year, Rouse and his team named the species ruby, due to its vibrant red color. And they set a goal: find it in the wild.

Seadragons are known to live only in remote waters off Australia. But Scripps has a long history of mounting expeditions to distant places. Rouse and his colleagues set off for Australia in early April, hoping for the best.

They got lucky on the fourth day of their expedition in the Recherche Archipelago: A ruby seadragon drifted in front of their remotely operated underwater vehicle. The female was "stunning," Rouse said on his Tumblr page.

"There was huge excitement in the cabin," he wrote. "We followed the fish for about 10 minutes and it obligingly provided good profile views for the camera."

Seadragons can swim, but they mostly drift with the currents. It's likely that the currents carried the fish in front of the camera.

Rouse posted a photo of the ruby seadragon's habitat, roughly 175 feet below the surface. But no images of the two fish they spied will be released for a few months, he said — the scientists want to write up their discovery for a scientific journal first.

In June, Scripps' Birch Aquarium will host an international conference on seadragons. Rubies will be the centerpiece.

Rouse could not be reached this week to discuss the sighting. But he made his feelings clear last year, when the team confirmed the existence of a third seadragon species.

"We're now in a golden age of taxonomy and these powerful DNA tools are making it possible for more new species than ever to be discovered," he said at the time. "That such large charismatic marine species are still being found is evidence that there is still much to be done."