Prince always had superpowers. You only had to witness him picking up a guitar or sitting down at a keyboard to know it. His voice could encompass Curtis Mayfield, Stevie Wonder, and Mick Jagger, while remaining recognizable as its own thing. But around the time he created his own musical fantasia out of Tim Burton’s Batman

The result is probably the greatest tribute to Prince you could ever hope for. McDuffie, one of the all-time greatest comics creators, spins out a storyline that’s every bit as silly as Under the Cherry Moon, Graffiti Bridge, the Three Chains of Gold opera, orGlam Slam Ulysses. But McDuffie keeps Prince: Alter Ego focused on the power of Prince’s music, as well as some of the key themes of Prince’s work, especially duality.

Prince was frequently obsessed with duality. He was a Gemini, and occasionally referenced this fact in his lyrics. And the notion of a struggle between good and evil versions of himself comes up a lot in Prince’s music. (“I’ve got two sides, and they’re both friends,” he raps in “My Name is Prince.”)

Here’s the opening splash page of the comic, where Prince rides back into Minneapolis on his motorcycle, returning from a long tour: 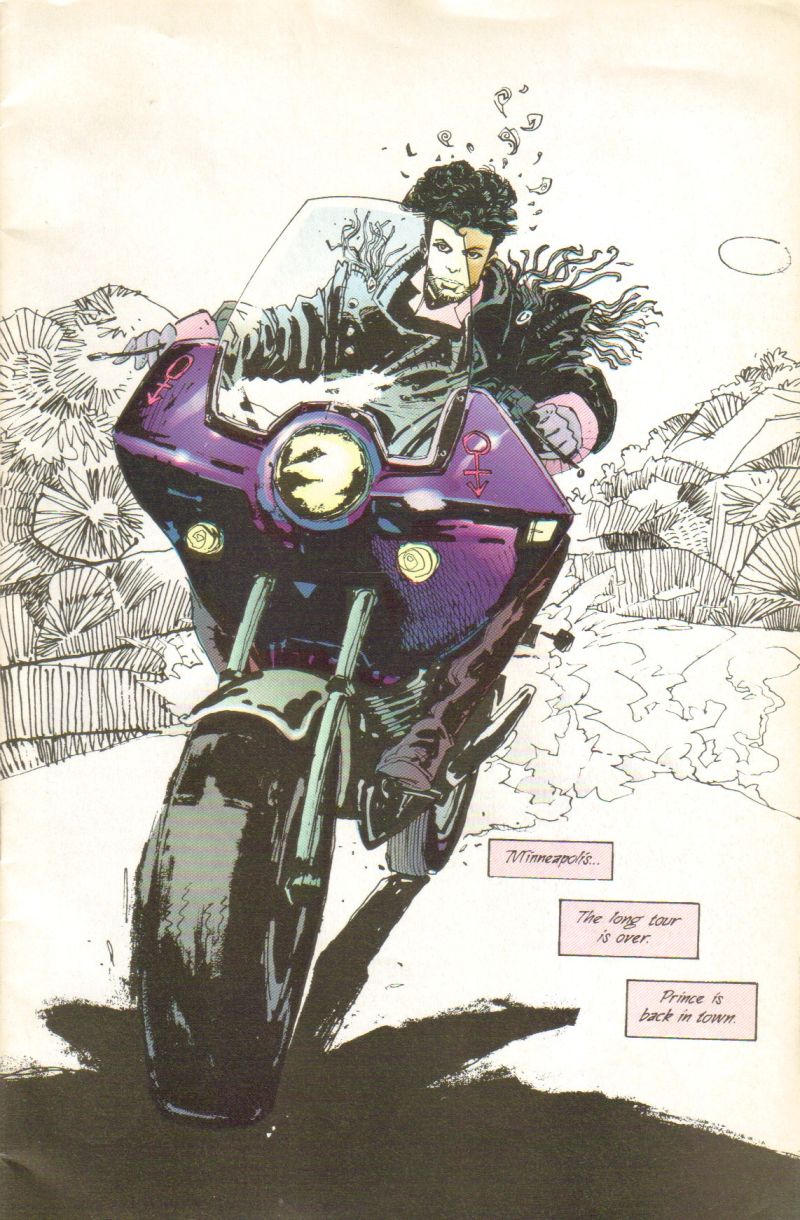 Soon, Prince gets caught up in local gang violence, and has to convince the local gang leaders to make peace instead of fighting. He also does get involved in some fights, which he wins using, basically, Prince-fu.

Prince is basically Batman in this comic, and it’s joked about a lot, including when he hits someone with a bat. “You really do think you’re Batman,” one of Prince’s friends tells him.

And Prince knows something is amiss when he discovers that two rival gangs are about to throw down—but neither gang has a beef with the other, and they’re not in either of their territorities. Prince gets between them and convinces the leaders to step down. “Stay out of this, Prince. This is between me and the mallet,” says one gang leader. “You got that much right,” says the other.

“I thought you were supposed to be leaders,” Prince says. “What happens to your people if you start a war with each other?”

Anyway, there’s a disturbance in the force, and only Prince can sense it—which is where his superpowers actually come in. He can make peace between gang leaders just through the force of his personality, but his actual ability is to “hear the music in everything” and respond accordingly:

And this allows Prince to hear that someone is creating a “brilliantly chaotic” new sound, that messes with people and turns them violent.

And it’s a sound he remembers from his childhood! Because it’s the sound of his evil twin, Gemini, who grew up with Prince. (Side note: I always wondered if this was intended as a bit of a jab at Prince’s childhood friend and collaborator, Andre Cymone.)

At last, Prince comes face to face with his old frenemy, who wants to drive people insane with music:

Again with the Batman thing.

Most comics creators, asked to do a Prince comic, probably would have just played up the “Raspberry Beret” goofiness of the man, with a lot of cartoon hijinks and Lake Minnetonka pranks. And that might have been a totally valid storytelling choice. But McDuffie and Cowan clearly love Prince a lot, and they try to capture something essential about his serious side. The moral and emotional struggles between not just good and evil, but also selfishness and generosity, that come up a lot in his work (especially in the ‘80s and ‘90s.)

The resulting comic is not quite up to the standards of the best Milestone stuff, but it does absolutely capture part of why Prince’s music was so emotionally intense, in addition to just being musically brilliant and all. Prince actually translates pretty well into a superhero because all those superheroic themes about the use of power, and the control over one’s self, dovetail pretty well with Prince’s constant “good-vs-evil,” “sex-and-God,” “Black Album vs Lovesexy” dualism. (As Prince himself proved with his Batman soundtrack and those videos where he’s both Batman and the Joker.)

Anyway, the comic ends with Prince confronting his nemesis, Gemini, and they settle this like musicians: with a guitar battle. But Gemini cheats, rigging a guitar to electrocute Prince when he tries to play it. At the last second, Prince’s girlfriend Muse (who was secretly working for Gemini and feels guilty about it) throws herself on the electrified guitar, sacrificing herself to save Prince: 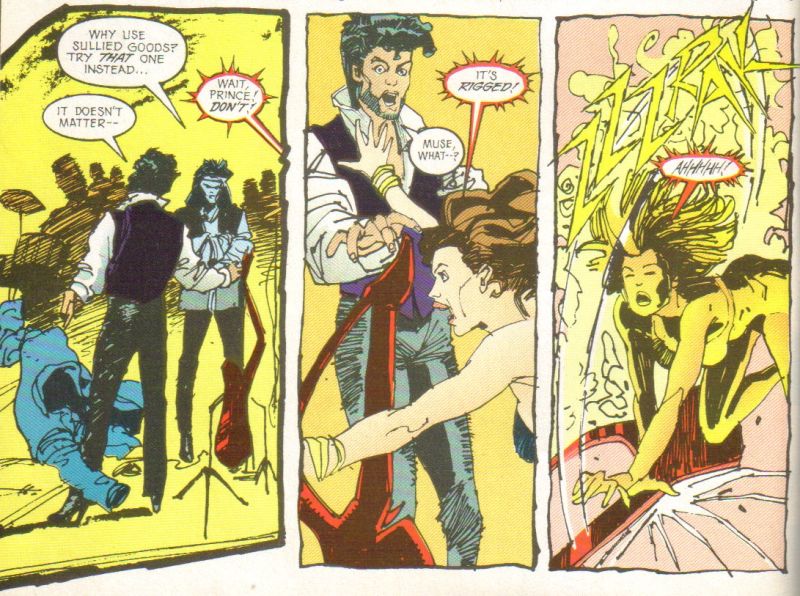 And then Prince proceeds to break Gemini’s control over the crowd by playing so incredibly well that people come back to their senses: 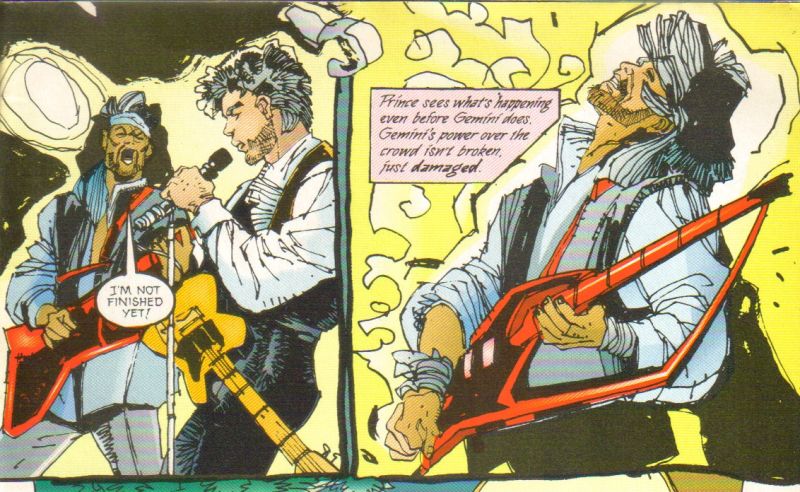 There have been other superheroes who use music and sound; Dazzler comes to mind, for instance. But I kind of love that this comic ends with Prince winning by playing a guitar so well that he kicks everyone’s ass.

Because that really was his superpower, right until the end.