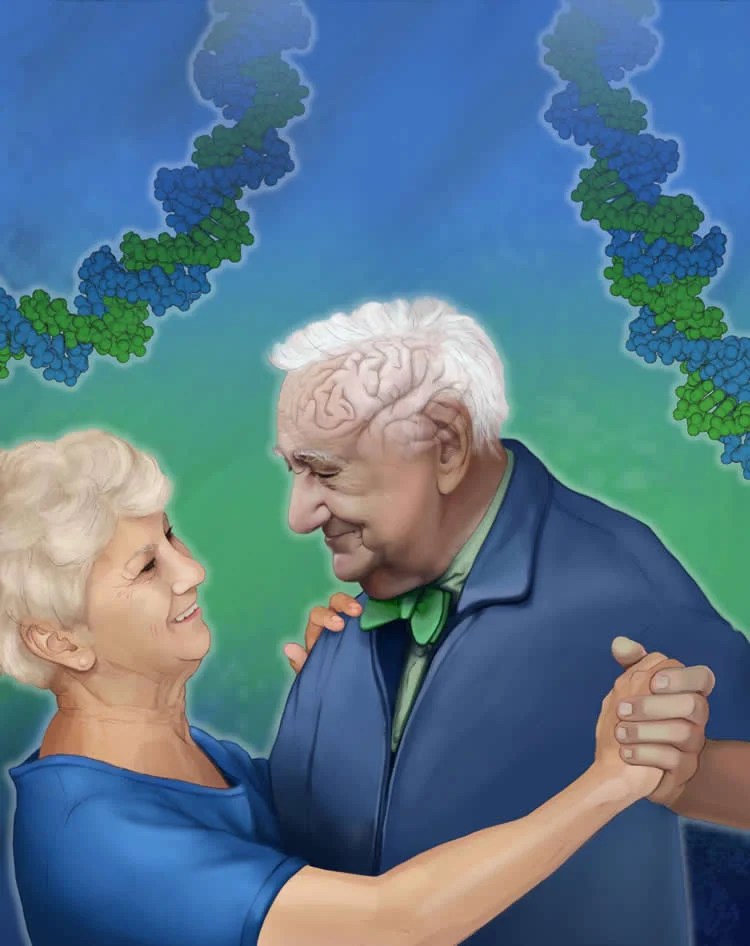 An eight-year-long accrual and analysis of the whole genome sequences of healthy elderly people, or “Wellderly,” has revealed a higher-than-normal presence of genetic variants offering protection from cognitive decline, researchers from the Scripps Translational Science Institute (STSI) reported today in the journal Cell.

The initial findings from the Wellderly Study suggest a possible link between long-term cognitive health and protection from chronic diseases, including cancer, heart disease and diabetes, which account for 90 percent of all deaths in the United States and other industrialized nations and more than 75 percent of health care costs.

“The Wellderly, as we’ve defined, are exceptional individuals who live into their ninth decade and beyond without developing a significant chronic medical condition,” said STSI Director Eric Topol, M.D., who is one of the study’s senior authors. “Our findings indicate that protection from cognitive decline is associated, not necessarily cause and effect, with healthspan. Since healthspan is woefully understudied, much more work in large numbers of individuals across all ancestries is desperately needed. For this reason, we have made all the genomic data available to the research community and public to help spawn further research.”

Results of the Wellderly Study were published online today by Cell. The report also will appear in the journal’s May print edition.

STSI is a National Institutes of Health-sponsored site led by Scripps Health in collaboration with The Scripps Research Institute. This innovative research partnership is leading the effort to translate wireless and genetic medical technologies into high-quality, cost-effective treatments and diagnostics for patients.

STSI researchers launched the Wellderly Study in 2007 in hopes of unlocking the genetic secrets behind lifelong health. The ongoing project has enrolled more than 1,400 people from across the country ranging in age from 80 to 105 who have not developed any chronic medical conditions or diseases including cancer, stroke, Alzheimer’s, Parkinson’s disease, diabetes and heart attack.

“This study is exciting because it is the first large one using genetic sequencing to focus on health,” said Stanford University Department of Genetics Chairman Michael Snyder, Ph.D., who was not involved with the research. “Most of the world’s scientists are studying disease, but what we really want to understand is what keeps us healthy. That is what the Wellderly Study is all about.”

John Rawlings, 90, of San Diego is one of the study’s participants. The Indiana native and World War II veteran started playing softball in his 70s and was inducted into the National Senior Softball Hall of Fame in 2009. He also is an avid reader.

For the study, researchers sequenced the whole genomes of 600 study participants and compared their DNA with genetic data gathered from 1,507 adults by Inova Translational Medicine Institute as part of a separate study. The ITMI cohort represented the general population. All of the genomes were mapped using the Complete Genomics sequencing platform.

After filtering to control for ethnic differences and blood relatedness, downstream DNA analyses were conducted on the genomes of 511 Wellderly individuals and 686 ITMI individuals. Researchers ended up analyzing 24,205,551 individual gene variants in both groups.

The Wellderly group had a significantly lower genetic risk for Alzheimer’s and coronary artery disease, researchers found. However, no difference was found between the two groups in genetic risk for cancer, stroke or type 2 diabetes, suggesting protective behaviors or other genetic characteristics might be at play among the Wellderly.

“We didn’t find a silver bullet for healthy longevity,” said Ali Torkamani, Ph.D., director of genome informatics at STSI and one of the study’s co-authors. “Instead, we found weaker signals among common as well as rare variant sites, which collectively suggest that protection against cognitive decline contributes to healthy aging.”

“Those gene variants might offer a pathway for the development of new treatments for Alzheimer’s,” Torkamani said.

“For many decades, we have searched for the genetic causes of disease in sick individuals,” noted founding director of the Icahn Institute for Genomics and Multiscale Biology at Mount Sinai Eric Schadt, Ph.D., who was not involved with the STSI research. “The Wellderly Study presents an attractive alternative by studying those who are well in order to uncover the solutions nature has provided to protect us against disease. The initial discoveries around protective factors for Alzheimer’s disease and coronary artery disease demonstrate the keys the Wellderly may hold in unlocking ways in which we all may live healthier lives.”Summary
Studies of long-lived individuals have revealed few genetic mechanisms for protection against age-associated disease. Therefore, we pursued genome sequencing of a related phenotype—healthy aging—to understand the genetics of disease-free aging without medical intervention. In contrast with studies of exceptional longevity, usually focused on centenarians, healthy aging is not associated with known longevity variants, but is associated with reduced genetic susceptibility to Alzheimer and coronary artery disease. Additionally, healthy aging is not associated with a decreased rate of rare pathogenic variants, potentially indicating the presence of disease-resistance factors. In keeping with this possibility, we identify suggestive common and rare variant genetic associations implying that protection against cognitive decline is a genetic component of healthy aging. These findings, based on a relatively small cohort, require independent replication. Overall, our results suggest healthy aging is an overlapping but distinct phenotype from exceptional longevity that may be enriched with disease-protective genetic factors.