You won’t be fighting aliens in Call of Duty: Infinite Warfare 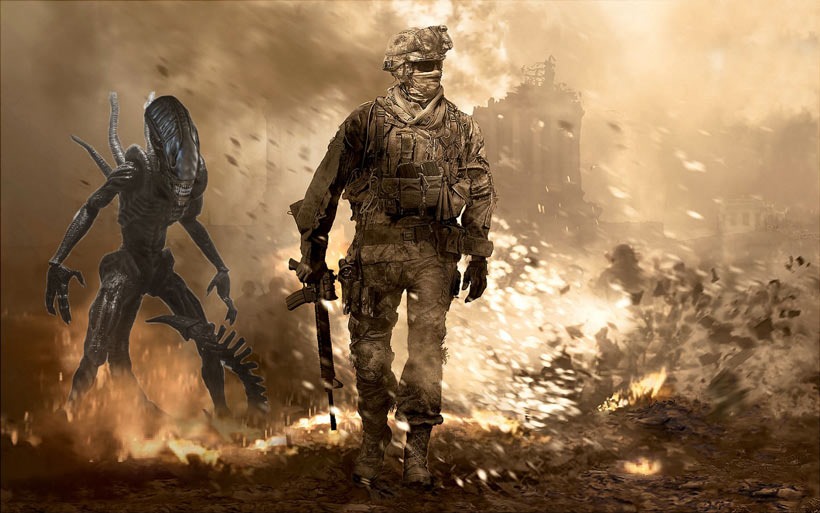 You won’t be fighting aliens in Call of Duty: Infinite Warfare published by Evanvinh
Writer Rating: 5.0000
Posted on 2016-05-03
Writer Description: Evanvinh
This writer has written 733 articles.

Like sand through the hourglass, so are the Calls of Duties of our lives. A new year means a new Call of Duty, with 2016 continuing the Advanced Warfare theme of augmented soldiers by throwing players into the one environment where they have yet to hurl insults at one another in a Call of Duty game: SPACE! Infinite Warfare is the name of the game, dropping out of orbit at the end of the year with a properly futuristic setup that has players wielding lasers…FOR AMERICA!

And with that kind of game on the horizon, you’d expect sci-fi influences to be heavily impacting on the core narrative of Call of Duty this year. But the thing is, it has and always will be war that influences Call of Duty. War. It never changes. “The approach that we’ve been taking with this game… the inspirations don’t come from sci-fi or space in any way,” Infinite Warfare design director Jacob Minkoff Minkoff said to GameSpot, detailing how its humanity and not aliens who are creating the massive threat this year.

The inspirations come from war stories. This is Call of Duty. We are talking about warfare and in this case Infinite Warfare… what we feel is that classically told narratives can take place in any setting. In this case, we have the additional pressure of our setting. Space is an inhospitable environment for humans.

“It’s man vs. man. The truth is that war follows us everywhere,” Minkoff explained, detailing the story and how the characters were meant to be “as relatable as they can be when they’re a T-1 operator,”  because pressure makes “interesting things happen,” when you’re a human.

We feel like this is going to give you the trademark Call of Duty feeling no matter what setting we’re in. And fundamentally there is never fatigue for a good story well told, no matter what the genre.

The PlayStation 4 gets all the DLC exclusivity again, now that the Xbox honeymoon is over. While Activision won’t have a dedicated showfloor presence at E3 this year, expect to see more of Infinite Warfare at Sony’s Pre-E3 press conference next month.