Meet some amazing animals and plants that are new to science 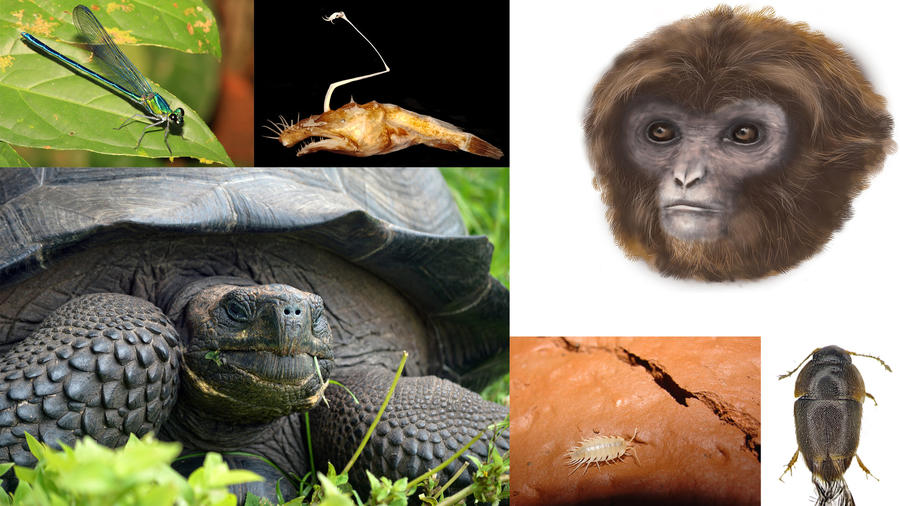 Meet some amazing animals and plants that are new to science published by Evanvinh
Writer Rating: 1.0000
Posted on 2016-05-24
Writer Description: Evanvinh
This writer has written 733 articles.

fe on Earth can be found in the most surprising places, from the deep sea to pitch-black caves to just off the main road of a Gabonese National Park.

Each year, about 18,000 species are discovered and described by scientists in thousands of academic publications, where regular folks may never find them on their own. Luckily, a panel of experts at the SUNY College of Environmental Science and Forestry (ESF) publishes a highlight reel for the rest of us — their annual Top 10 list of the new species discovered over the last year.

Since 2008, ESF's International Institute for Species Exploration, comprised of an international committee of taxonomists, has unveiled its list near the birthday of Carolus Linnaeus, the father of modern taxonomy. Born May 23, 1707, the Swedish botanist is credited with formalizing the system of identifying species by two names (e.g. Homo sapiens).

See the most-read stories in Science this hour >>

The Top 10 list is meant to highlight new discoveries, even as species go extinct faster than they can be identified.

"By having a team of scientists around the world pick their favorite top 10 each year, we're able to ... really put a face on biodiversity," Quentin Wheeler, ESF president and founding director of the International Institute for Species Exploration, explained in a statement.

By understanding what kinds of plants and animals exist and where they live, scientists can help slow the biodiversity crisis currently unfolding, Wheeler said.

There are about 9 million species known to science, but experts believe there are many times that number still waiting be discovered.

Here are 10 of the most exciting newcomers to science that were officially added to the tree of life in 2015. 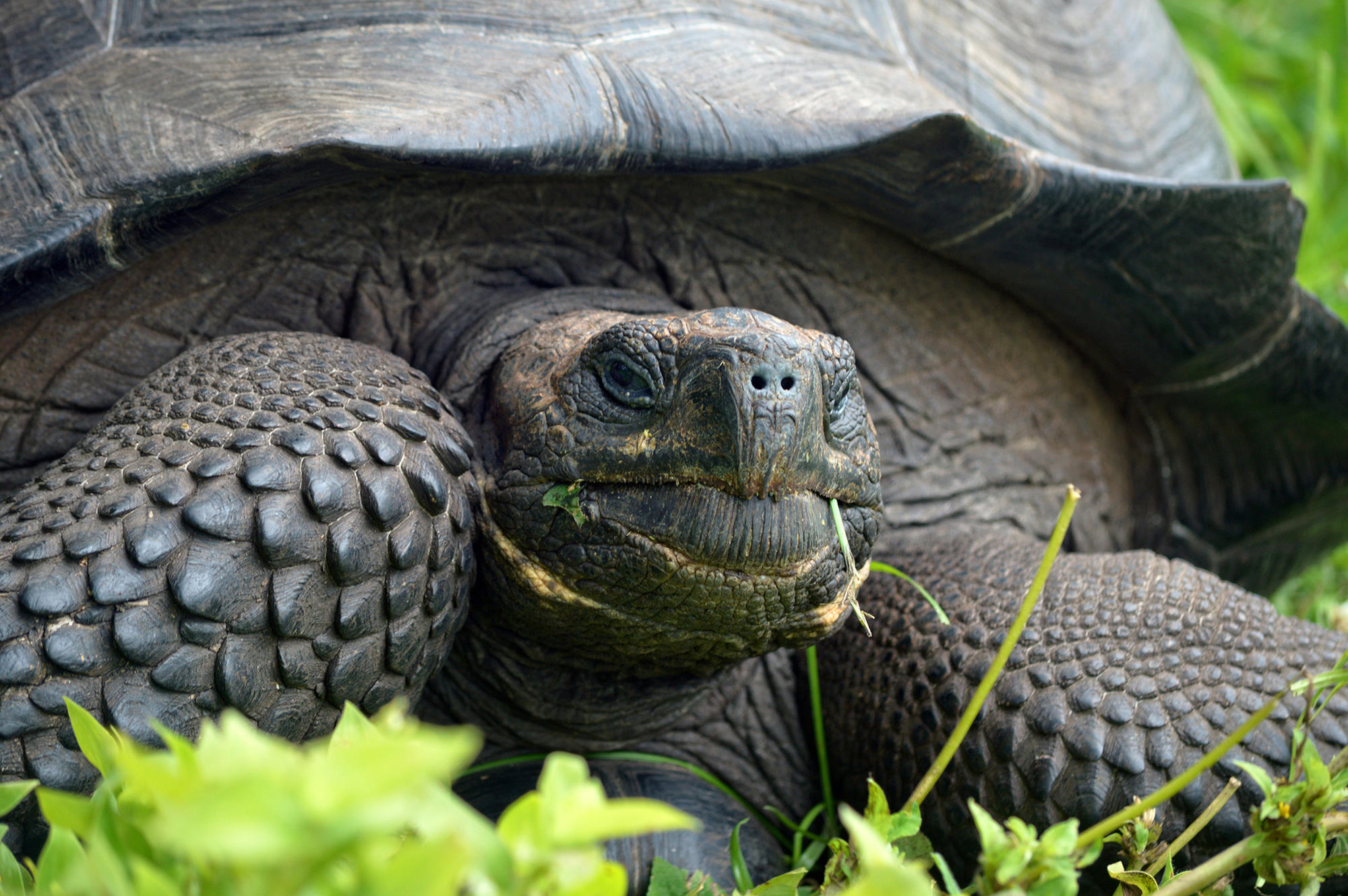 This means the original species, C. porteri, has a smaller range than previously thought, which is restricted to western and southwestern portions of the island. The C. porteri population and the eastern C. donfaustoi population are naturally isolated from each other on Santa Cruz Island.

The new species was named after longtime park ranger Fausto Llerena Sánchez, nicknamed "Don Fausto," who worked with the reptiles for 43 years until his retirement in 2014.

"'Don Fausto' was the primary caretaker of endangered tortoises in captivity, one of the first to explore tortoise habitat throughout the archipelago, and was well known for his work ethic, commitment to tortoise conservation, and collegiality," wrote the authors of a PLos One study describing the new species. "Several tortoise lineages in Galapagos remain extant in large part due to Don Fausto’s dedication, ingenuity, and patience." 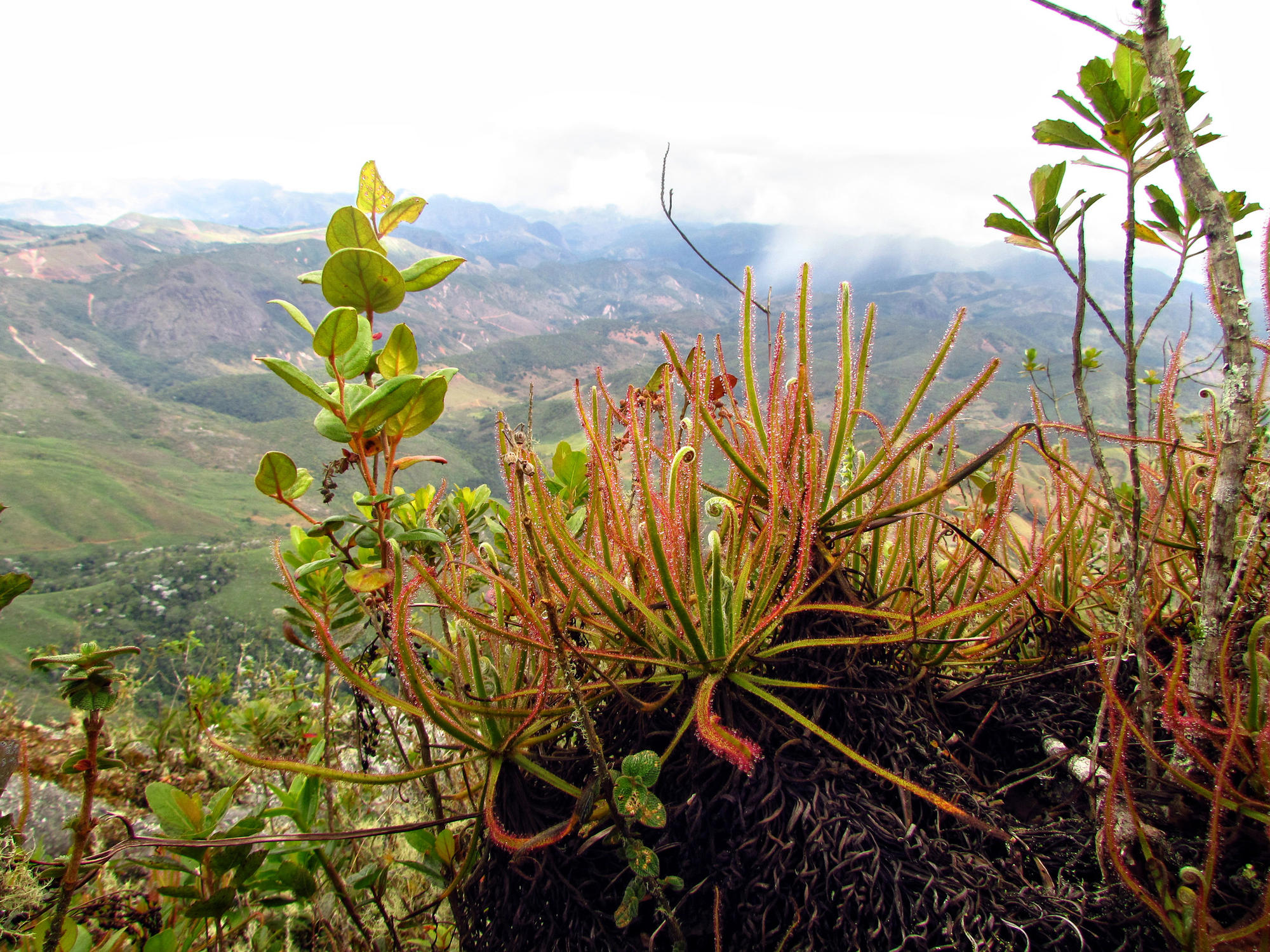 The carniverous giant sundew with other plants in Brazil. (Paulo M. Gonella) 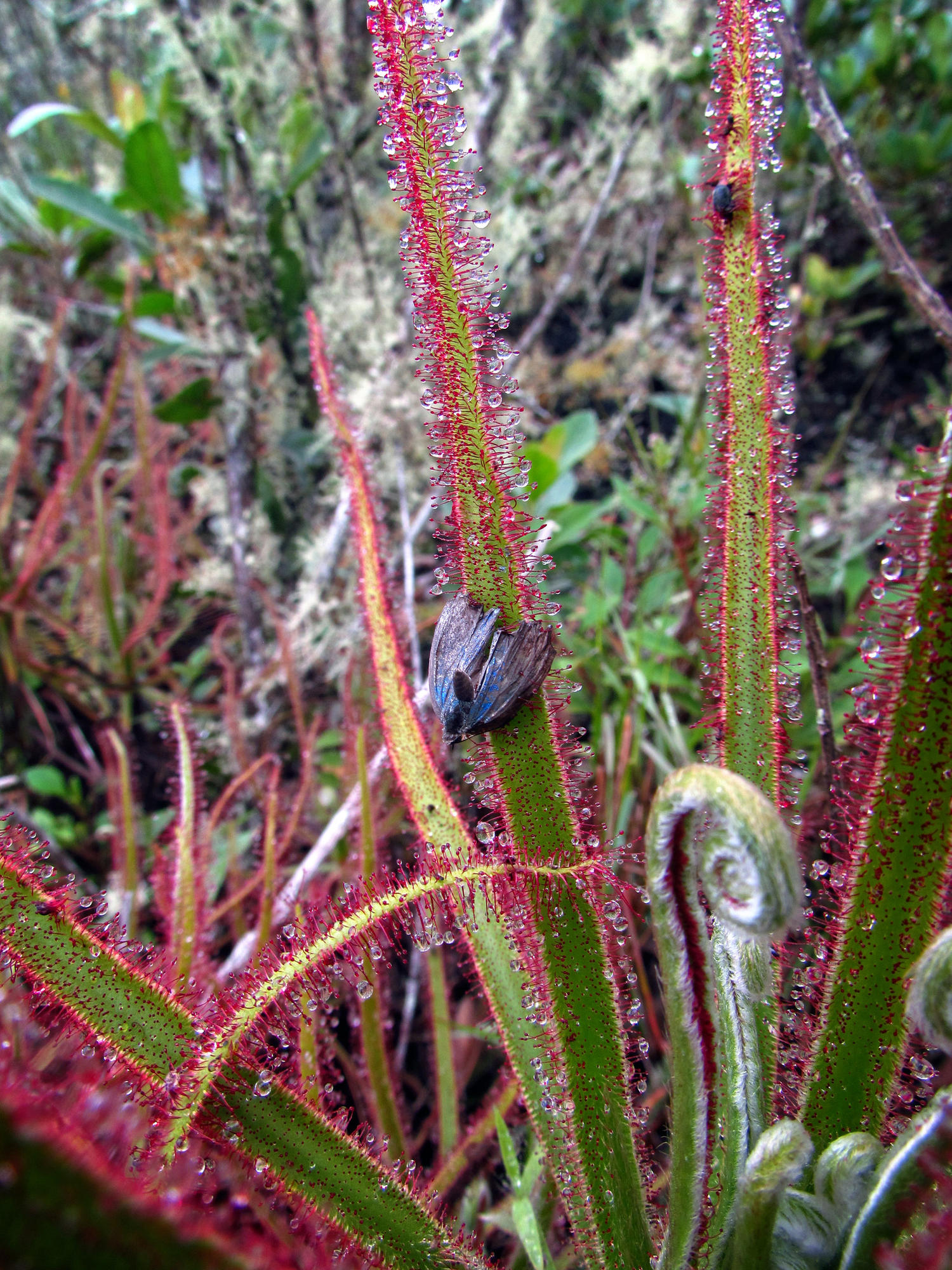 This giant sundew plant is a record-breaker in two ways.

First, it's the largest such plant ever seen in the Americas, with stems growing up to 4 feet tall. Second, it's likely the first new species of plantdiscovered through photos shared on Facebook.

The carnivorous plant secretes a thick mucus on the surface of its leaves to trap and digest unsuspecting insects. The bugs help supplement the inadequate nutrition the plant receives from the soils where it grows. Found on a single mountaintop in southeastern Brazil, the plant is abundant in its small area but already considered critically endangered, according to the International Union of Conservation of Nature Red List criteria. 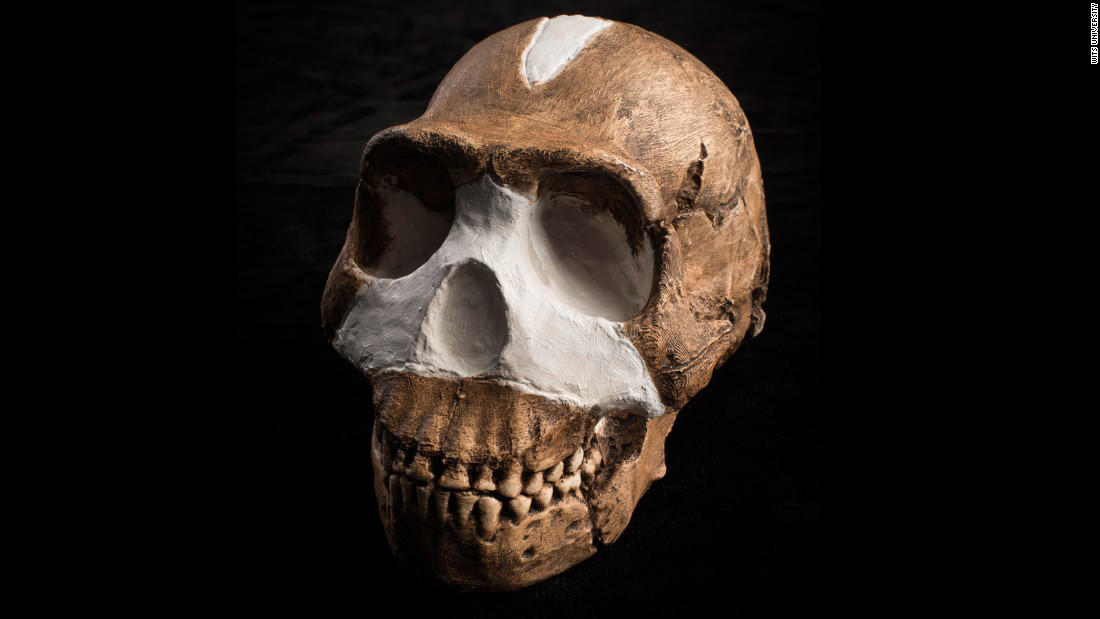 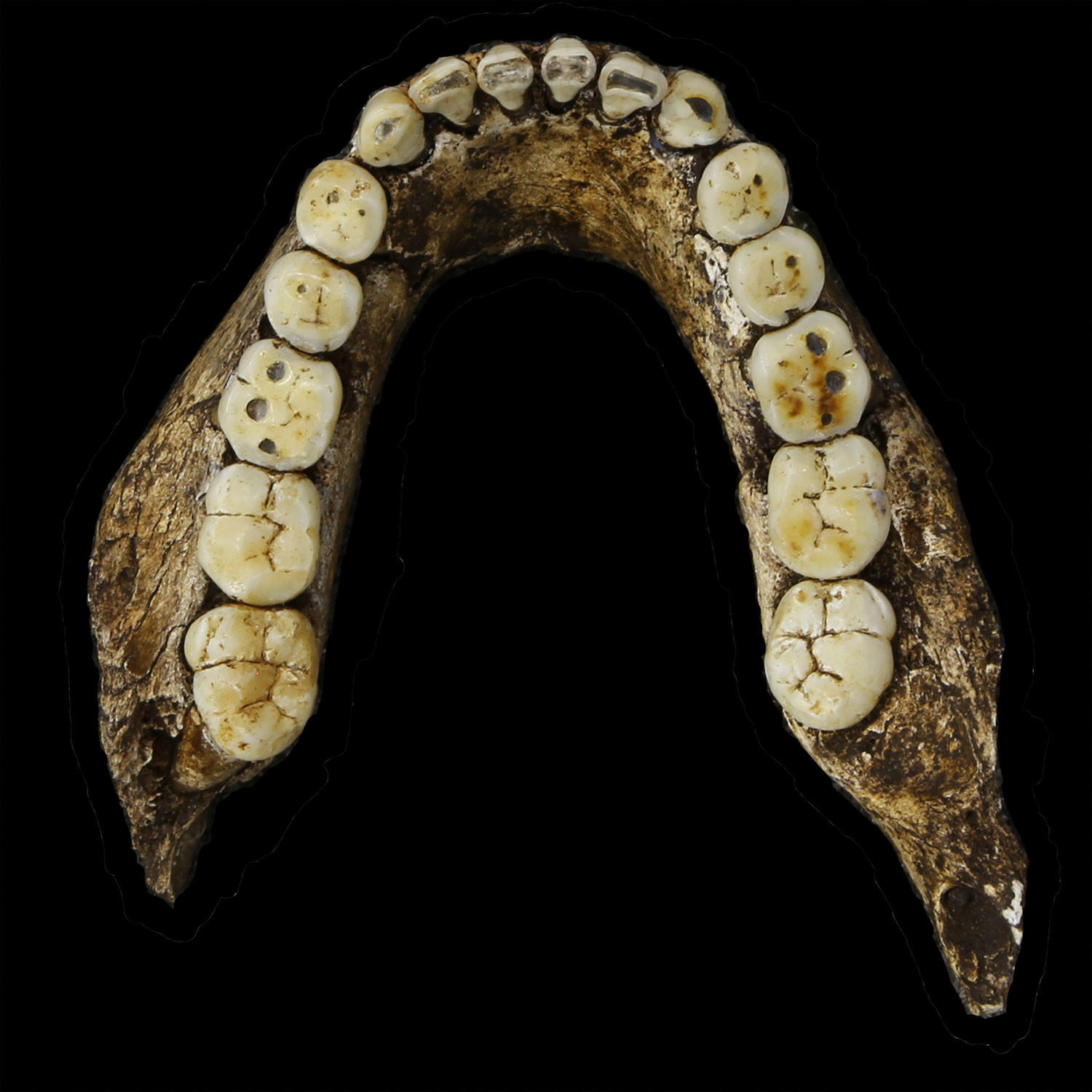 In a South African cave, scientists discovered the fossil remains of at least 15 individuals belonging to a previously unknown species of hominins.

The bones, first found in 2013, exhibit a combination of modern human and more ape-like traits. For example, with its humanlike feet and hands, Homo naledi likely walked and used its hands like other species in the genus Homo, but still had a brain size similar to earlier ancestors living 2 million to 4 million  years ago. H. naledi was also similar to us in size and weight. Its shoulders, pelvis and rib cage resembled earlier humans, according to a 2015 reporton the find published in eLife.

Scientists have not determined the age of the fossils.

Pillbugs that build their own homes

Iuiuniscus iuiuensis on the move, left, and in its habitat, right. (Souza, Ferreira & Senna )

Isopods, or pillbugs, are crustaceans that live in water or on land. These isopods, discovered in a Brazilian cave, live in the mud.

The blind, pallid I. iuiuensis builds its own spherical shelters out of mud, a behavior never seen before in isopods endemic to the Americas. Inside its oddly shaped home, the tiny creature, only a third of an inch long, sheds its exoskeleton. Its spiny appearance arises from tapering plates at the base of its legs.

The expedition that discovered I. iuiuensis also searched eight other caves in the region, but the new isopod was found in only one cave. The cave's only entrance is at the bottom of a sinkhole that floods during the rainy season.

What a catch! New anglerfish found in Gulf of Mexico

The deep sea has no shortage of, well, interesting-looking fish. This new species of anglerfish is no exception.

The two-inch-long fish is quite different from the other five species in the anglerfish genus, the scientists noted. Different types of anglerfish are distinguished by the characteristic fishing pole-like organ on top of their heads, called the esca. In some species, the esca contains bioluminescent bacteria that produce light in the deep, dark ocean and presumably attracts prey. L. dinema's esca is unusual for the three appendages growing out of it. 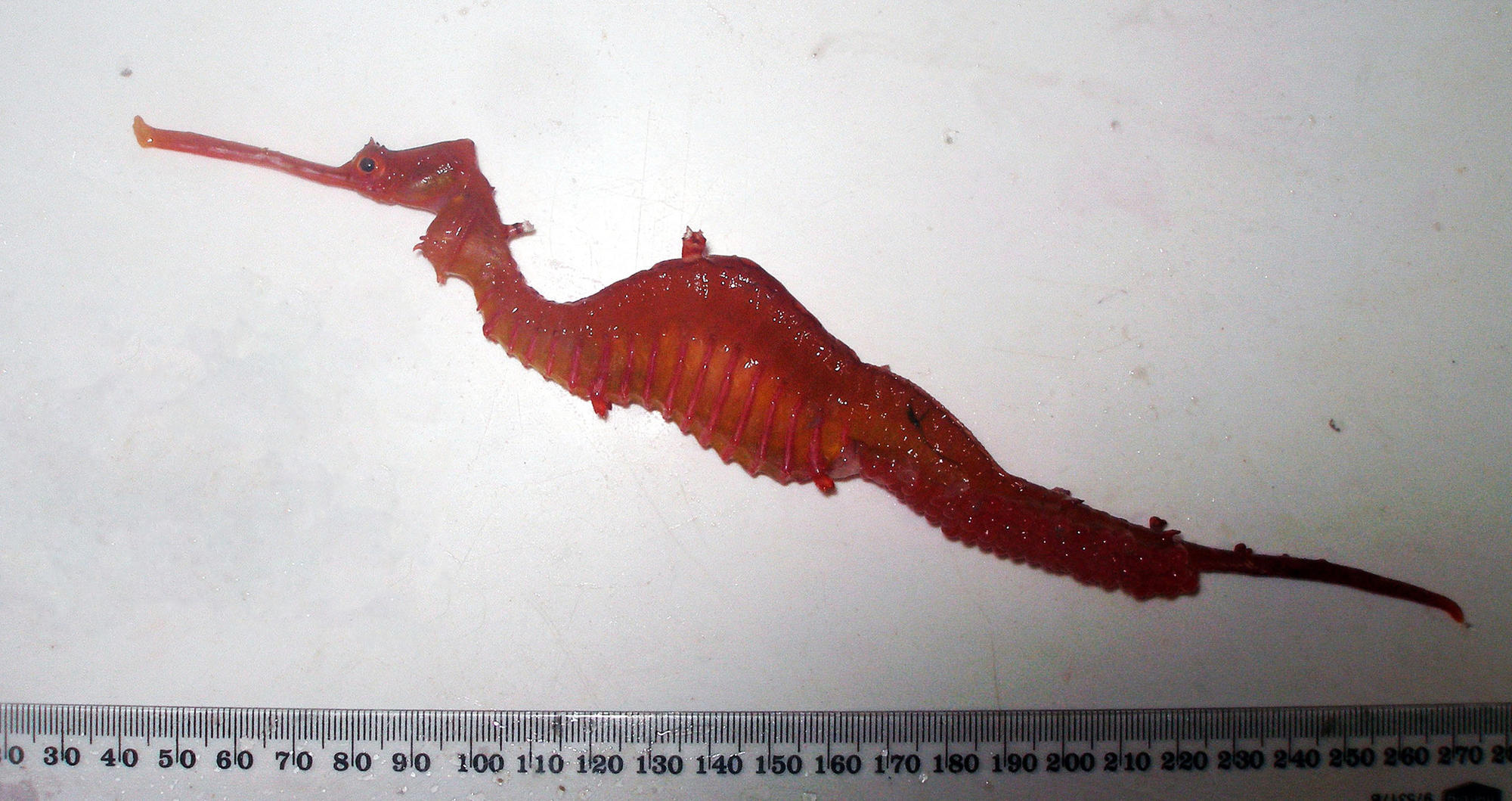 Named for its striking red color, the ruby seadragon also has rib-like pink bars on its body. The nearly 10-inch-long fish was discovered off the coast of Western Australia. Rubies are found farther offshore in slightly deeper waters than the other two seadragon species.

Although scientists at the Scripps Institution of Oceanography in San Diego identified the new species through genetic testing of a museum specimen, they found a living member of the species in the wild for the first time in April.

"Aside from its spectacular appearance, it is a reminder of what we have yet to discover about marine species diversity," ESF noted. "If ruby red dragons nearly a foot long in shallow waters have escaped our attention, what else do we not yet know?"

Named after a bear, this beetle delivers a message of conservation 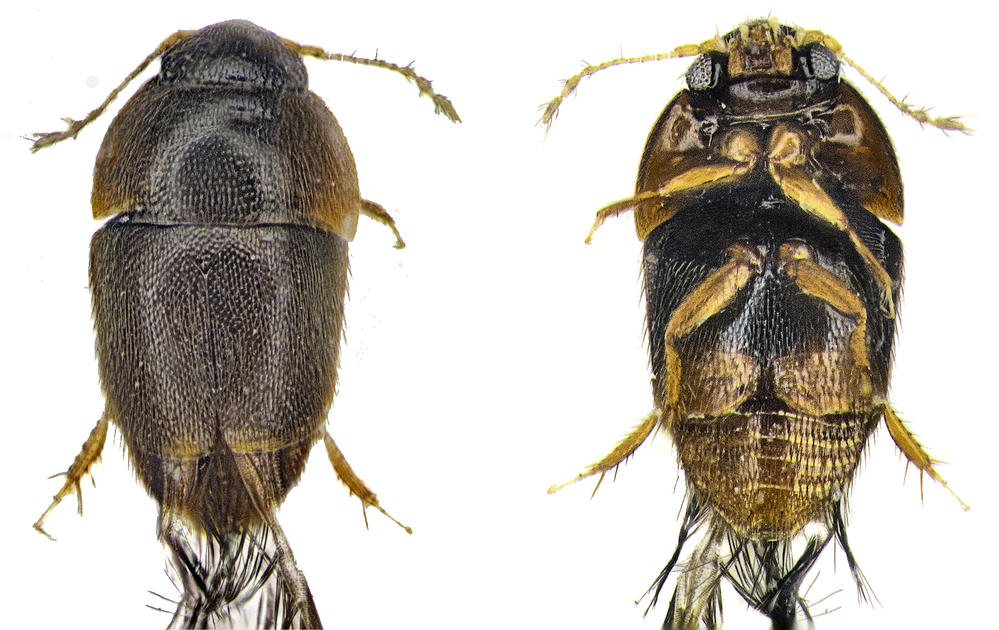 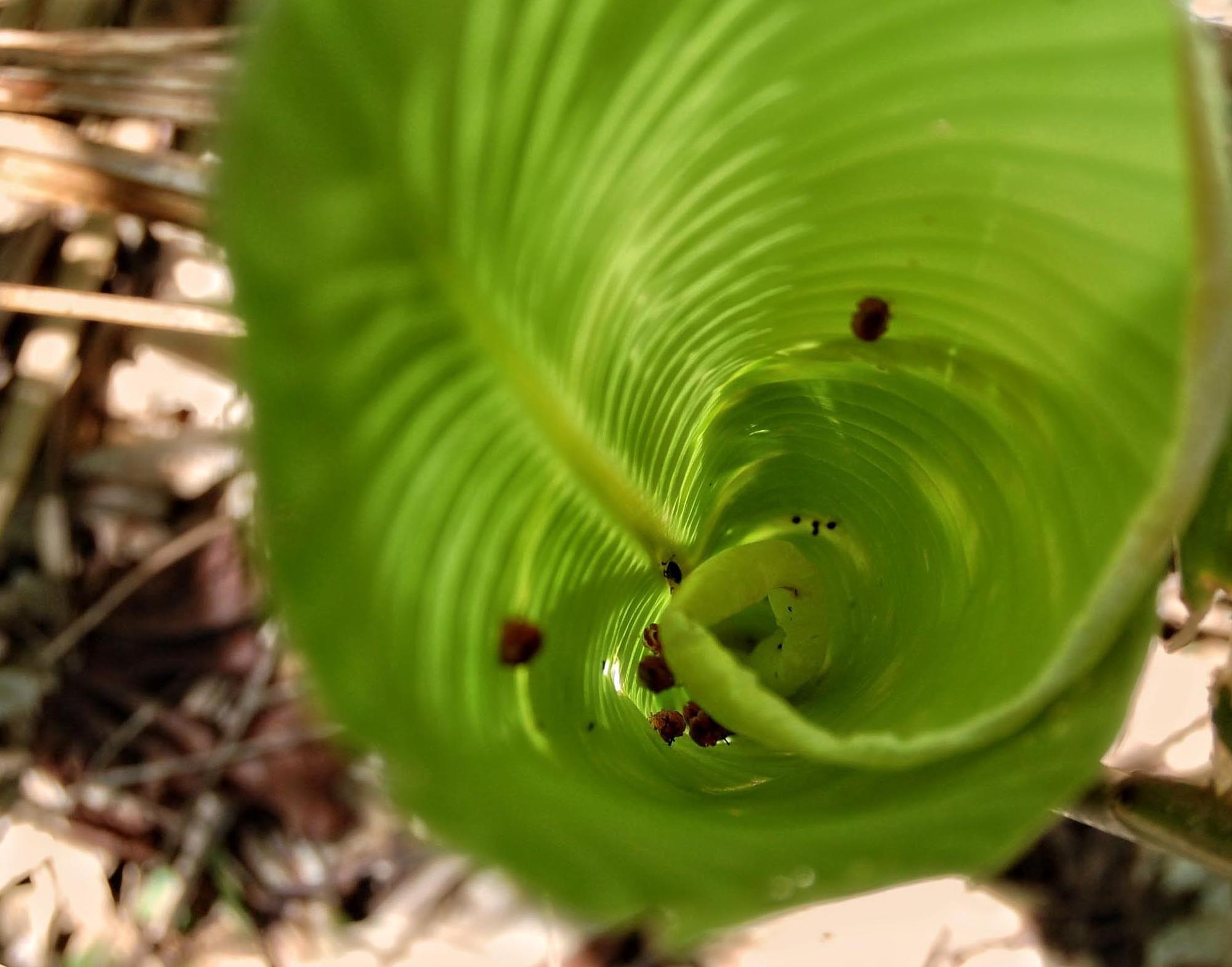 Researchers named this newly discovered featherwing beetle for Paddington Bear, the subject of the popular children's books. Introduced in 1958, the fictional bear shows up in London's Paddington Station after making an impressive journey from Peru.

By naming the beetle after Paddington, the researchers wrote they hoped to draw attention to the vulnerable Andean spectacled bear and "promote conservation of its fragmented habitats and for the other threatened plants and beetles including P. osopaddington 'Paddington beetle.'"

While P. osopaddington may have an odd name, its way of life is even more peculiar.

These featherwing beetles, named for the shape of their wings, are only about 1/25th of an inch long. They live in the pools of water that accumulate in hollow plants, such as tree holes and dome-shaped plants. These bodies of water even have a name, phyototelmata, and are home to a variety animals, including insects and frogs.

Because P. osopaddington was discovered in the leaves of an introduced, cultivated Malaysian plant, scientists aren't sure about what it eats or where it naturally lives and breeds. In fact, they're not even sure if it is an introduced species itself or native to Peru.

'Laia,' the ancient sister we probably share with apes and gibbons 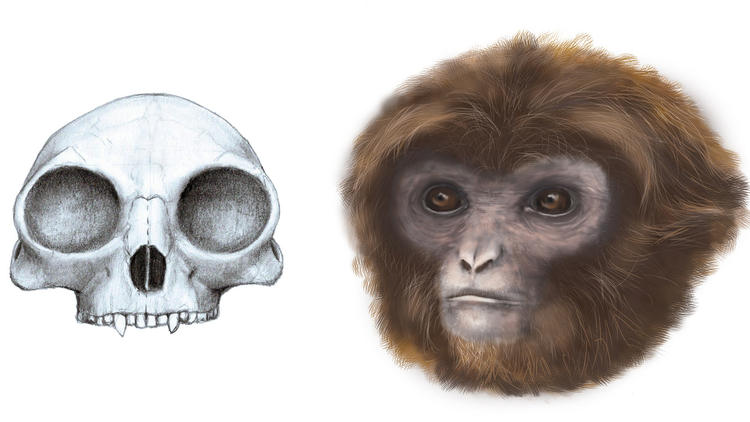 The discovery of a little ape may have big consequences for scientists' theories of the origins of humans, apes and gibbons.

"Laia," as her discoverers nicknamed her, was unearthed in a Spanish landfill and lived about 11.6 million years ago. That's before the ancestor of humans and other great apes had diverged from its sister branch, the gibbons. Laia's discovery shows that this common ancestor was likely more gibbon-like than ape.

She was probably 17 inches tall and weighed 9 to 11 pounds, climbing trees and eating fruit, much like gibbons and most modern apes. 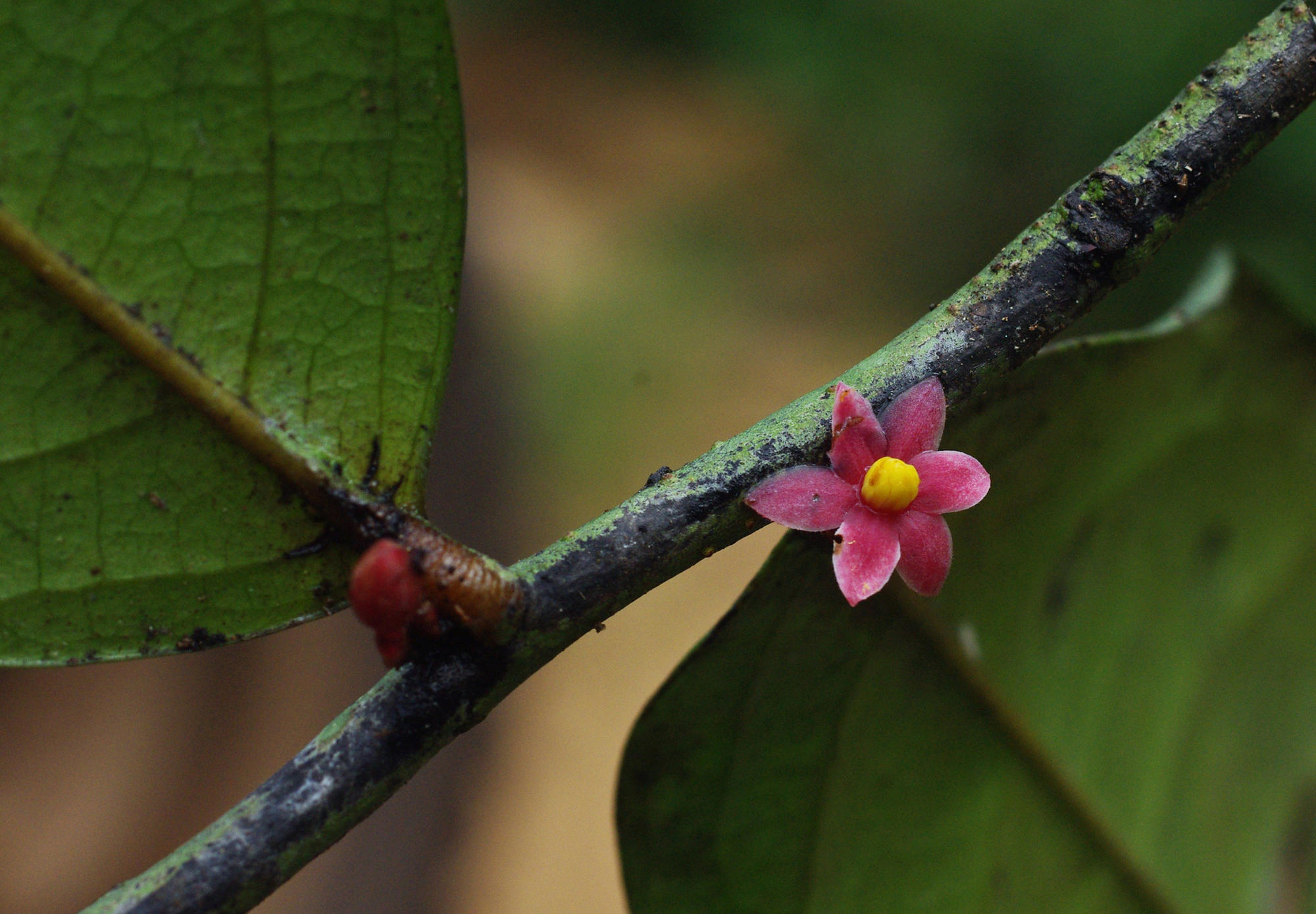 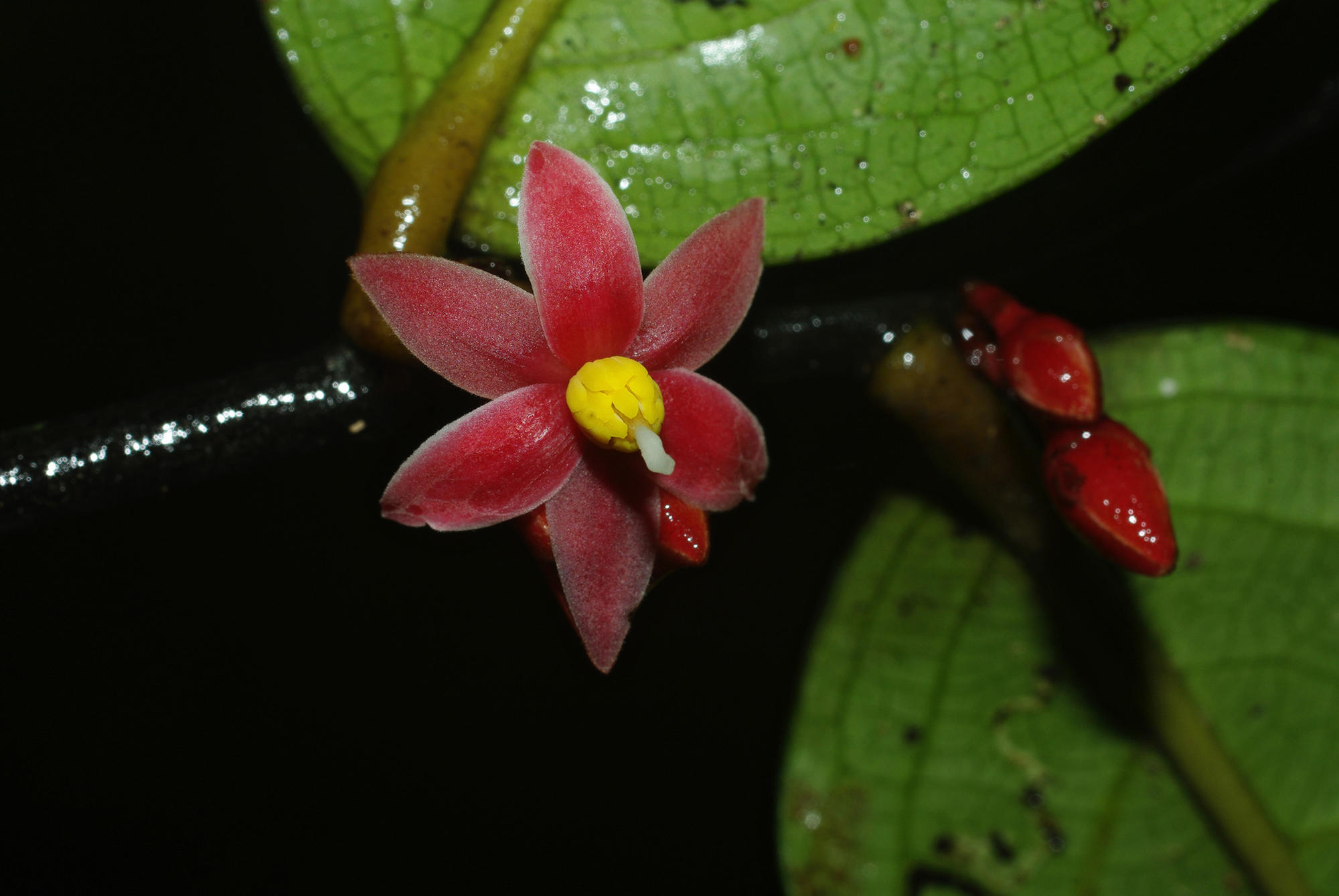 This slight flowering tree, just 20 feet tall and four inches in diameter, had been hiding in plain sight, not far off the main road of Gabon's Monts de Cristal National Park.

Genetic testing revealed the tree was so different from other flowering plants that it represented not just a new species but an entirely new genus, too. Scientistsnamed the tree's genus, Sirdavidia, for famed naturalist Sir David Attenborough.

The species name, solannona, references the tree's resemblance to certain nightshade plants, which include potatoes and tomatoes, and are likely pollinated by bees.

One of 60, this new sparklewing damselfly manages to stand out 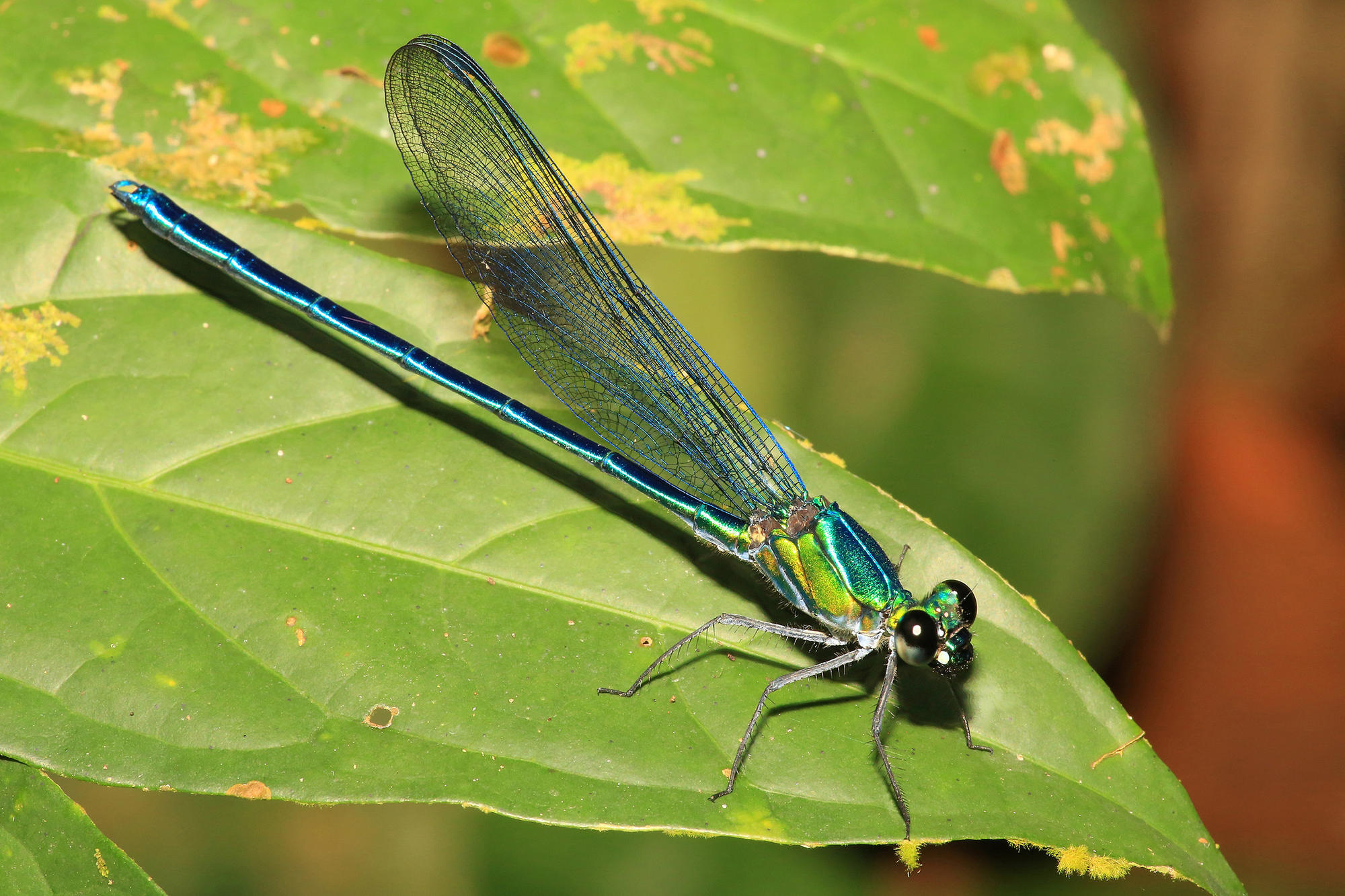 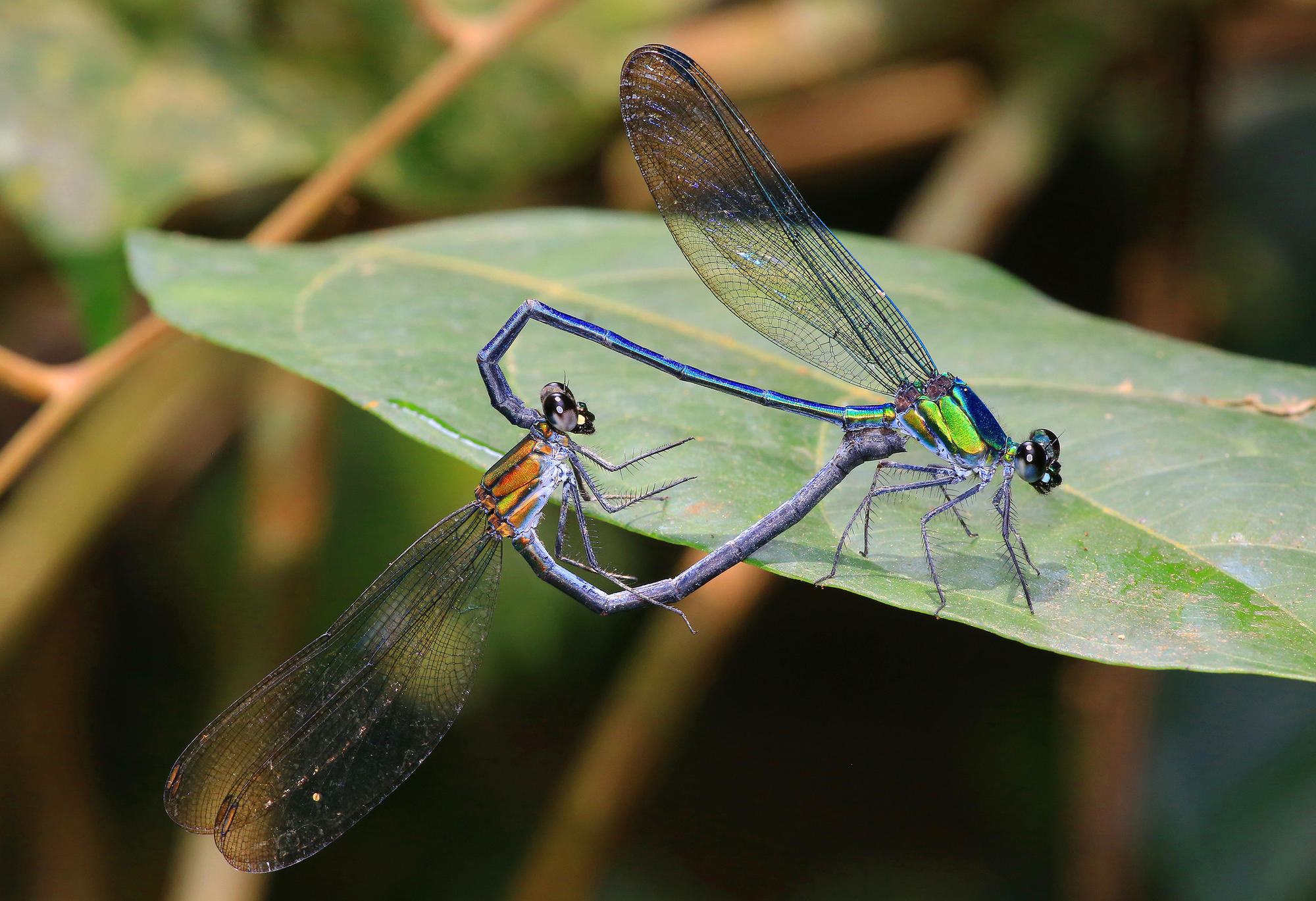 Last year, sixty new species of damselfly were described in a single paper, the most to be named at once in more than a century. Most of the new insects, found in Africa, were so colorful and distinct that they could be identified just from their photographs. The discoveries serve as a reminder that not all unknown species are small and obscure, the authors wrote in the lengthy study.

Since damselflies belong to the genus Umma, the researchers saw an opportunity to have some fun with the naming of one species. The shimmering blue and green Robust Sparklewing (Umma gumma), shares its name with the 1969 Pink Floyd albumUmmagumma, which is also a slang term for sex that is used in Cambridge, Britain.

Who said taxonomy can't be sexy?