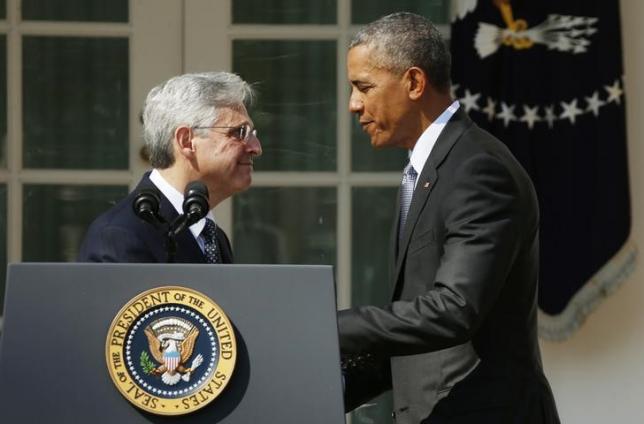 A bruising political fight is brewing over the nomination, which also promises to figure in the already contentious campaign ahead of the Nov. 8 U.S. presidential election. The Republican-led Senate's leaders have vowed not to hold confirmation hearings or an up-or-down vote on any Obama nominee.

Garland, 63, was picked to replace long-serving conservative Justice Antonin Scalia, who died on Feb. 13. A Chicagoan like Obama, he serves as chief judge of the influential U.S. Court of Appeals for the District of Columbia Circuit and is a former prosecutor who in the past has won praise from both Republicans and Democrats.

Republicans, hoping a candidate from their party wins the presidential election, are demanding that Obama leave the seat vacant and let his successor, to be sworn in next January, make the selection. Billionaire businessman Donald Trump is leading among Republicans for the nomination. Obama's former secretary of state, Hillary Clinton, is the front-runner for the Democrats.

The lifetime appointment to the high court requires Senate confirmation.

Obama said Republican senators should give Garland a fair hearing, saying that failing to do so "will not only be an abdication of the Senate’s constitutional duty, it will indicate a process for nominating and confirming judges that is beyond repair."

Such a move would undermine the reputation of the Supreme Court and faith in the American justice system. "Our democracy will ultimately suffer as well," Obama added, as he introduced Garland at a White House Rose Garden ceremony.

Scalia's death left the nine-member Supreme Court evenly split with four liberals and four conservative justices. Obama's nominee could tilt the court to the left for the first time in decades, which could affect rulings on contentious issues including abortion, gun rights, the death penalty and political spending.

Obama said the Supreme Court was supposed to be above politics and it should remain so.

"At a time when our politics are so polarized, at a time when norms and customs of political rhetoric and courtesy and comity are so often treated like they’re disposable, this is precisely the time when we should play it straight, and treat the process of appointing a Supreme Court justice with the seriousness and care it deserves," Obama said.

Senate Majority Leader Mitch McConnell of Kentucky swiftly reiterated that the Senate will not consider the nomination by the president. A McConnell spokesman said the senator had spoken by phone with Garland and would not hold a "perfunctory meeting" with him.

"It seems clear that President Obama made this nomination not with the intent of seeing the nominee confirmed, but in order to politicize it for purposes of the election," McConnell said on the Senate floor.

"This is an easy one. Both our leader and Judiciary chairman voted against him when he was confirmed before," the aide said. "And it’s a clear recognition by the White House that we mean what we say: there will be no confirmation. If they thought we were going to cave, they would have put up a much different candidate."

Obama acknowledged the simmering partisan tensions, but scolded Republicans for being divisive. "I also know that because of Justice [Antonin] Scalia's outsized role on the court and in American law and the fact that Americans are closely divided on a number of issues before the court, it is tempting to make this confirmation process simply an extension of our divided politics," he said. "The squabbling that's going on in the news every day. But to go down that path would be wrong."

Seven current GOP senators voted to confirm Garland, and Democrats are sure to level charges of hypocrisy against them if they stick with McConnell's plan to blockade any nominee. Sens. Dan Coats of Indiana, Thad Cochran of Mississippi, Susan Collins of Maine, Hatch of Utah, Jim Inhofe of Oklahoma, John McCain of Arizona and Pat Roberts of Kansas all supported the nomination in 1997.

But Republicans have been clear for weeks that they will block Obama's pick, regardless of qualifications. They've vowed to wait for the “voice of the people” to be heard in November's election before even considering the next justice, for fear of confirming a nominee that could tilt the court leftward for years to come.

On Wednesday, McConnell stuck to his guns. "As we continue working on issues like these, the American people are perfectly capable of having their say — their say on the issue," he said on Senate floor. "So let's give them a voice. Let's let the American people decide. The Senate will appropriately revisit the matter when it considers the qualifications of the nominee the next president nominees, whoever that might be."

While no Republicans said they would vote to confirm Garland, a handful indicated on Wednesday that they would at least take a meeting with him. New Hampshire's Kelly Ayotte, facing a stiff election challenge, said she would be willing to meet the nominee, as did Sens. Jeff Flake of Arizona and Collins.

But Democrats also see a once-in-a-generation chance to reshape the bench in their favor. And beyond that, the White House and its allies say they are fighting to preserve the power of the president to nominate a justice with the advice and consent of the Senate in the face of unprecedented partisan obstruction by Senate Republicans, who have ruled out even a confirmation hearing, let alone a vote.

"This is not a responsibility that I take lightly,” Obama said on Wednesday.

McConnell dug in his heels within hours of Scalia's death last month, saying the American people should have a say in choosing the next justice through the presidential election process. Democrats have strongly objected, and said Republicans' refusal is further evidence that they have long questioned Obama's legitimacy as president.

Outside groups have already fired shots in the escalating conflict. The conservative Judicial Crisis Network will launch an immediate $2 million ad buy opposing Garland's nomination, with national and state ads expected to be part of the campaign.

Garland is well-respected and politically connected in Democratic circles. One potential drawback for those hoping Obama would put a liberal justice on the court to serve for generations is Garland’s age, which at 63 is about a decade older than the average for recent Supreme Court picks. Garland has been on lists of potential Supreme Court hopefuls since the 1990s.

While Obama is clearly trying to put forward a nominee some Republican senators might be tempted to confirm, picking someone in his 60s could also be seen as a concession by the president that the Senate is unlikely to act so putting a younger nominee through a protracted confirmation fight isn’t worth the battle.

Garland will head to the Hill on Thursday to start meeting with senators, and Obama urged Republicans to give him some face time. The president noted that the Senate will start a two-week recess that day, and he urged them to reflect on what a blockade would mean “for our institutions, for our common life.”

“When they return, I hope that they’ll act in a bipartisan fashion,” he said. “I hope they’re fair. That’s all. I hope they are fair.”

In an email earlier in the day, Obama did not name his choice, but said he sought someone with "an independent mind, unimpeachable credentials, and an unquestionable mastery of law." The president also discussed his pick during a Wednesday morning conference call with Senate Democratic leadership and Judiciary Committee members, and the name leaked out shortly afterward.

Donald Trump, the Republican front-runner, backed up Senate Republicans on Wednesday morning, saying they shouldn't give Obama's pick a hearing.

True to Sen. John Cornyn's prediction that the nominee would "resemble a piñata," America Rising Squared and the Judicial Crisis Network were out with a research hit within minutes of the announcement. Garland, the release argued, would be a “reliable fifth vote for a laundry list of extreme liberal priorities,” particularly highlighting rulings “a remarkable level of hostility toward the Second Amendment.”

Privately, however, opposition researchers acknowledged ahead of the nomination that Garland would be harder to paint as a hard-core liberal than some of the other names on Obama’s reported short list, including Judges Sri Srinivasan and Paul Watford.

The White House is hoping to create some movement by this summer, but many expect this battle will go all the way through November, with Democrats threatening to turn it into a major political issue in all five states with vulnerable Senate Republican incumbents. They also hope to expand the 2016 battleground to more states with an argument about GOP obstruction, which they're aiming to tie to Trump's rise as the likely Republican presidential nominee.

But just as it appeared Garland might not draw maximum Republican ire, there were signs that the Garland pick could prove to be a letdown for Obama’s base as well.

Democracy for America’s Charles Chamberlain said it was “deeply disappointing” that Obama did not pick a progressive woman of color. By appeasing Republicans rather than picking a choice that inspires the base, Chamberlain warned in a statement, “this selection will make it harder to excite grass-roots progressive about the slog ahead.”

But other Democrats are focusing on the specter of Trump offering a nominee. And they’re confident that support is high among independents for Obama going through the normal process of replacing a justice on the Supreme Court, as recent polls show.

But Republicans are equally confident in their firm position, especially since filling Scalia's seat with an Obama nominee would change the ideological balance of the court for a generation. They’ve pointed to old arguments by Sen. Charles Schumer (D-N.Y.) and Vice President Joe Biden when he was in the Senate that the chamber should not necessarily confirm a justice in a presidential election year. Republicans have taken to saying they're just following the "Biden rule."

As the announcement plans were made public on Wednesday morning, the White House was already ramping up its campaign, creating the Twitter handle @SCOTUSnom.

But the fight was brewing well before that, with a special effort to put pressure on Grassley, who's known for valuing the traditions of the Senate. He’s up for reelection in November, and his refusal to hold hearings has emboldened a Democratic challenger, Patty Judge.

In his own remarks, Garland choked up as he spoke of his family's immigrant heritage, including grandparents who fled antisemitism in Europe. They made it to Chicago, where his parents taught him, "both by words and deeds," he said, that “a life of public service is as much a gift to the person who serves as it is to those he is serving."