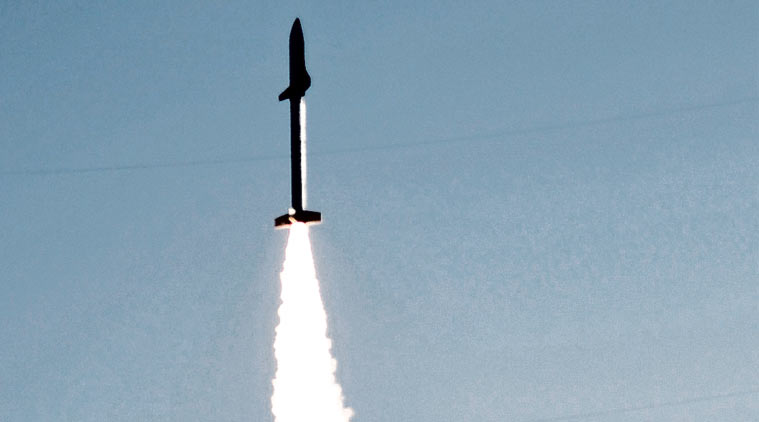 The Indian Space Research Organization on Monday joined the race to develop a space vehicle that can fly numerous times into space like aeroplanes by successfully conducting the maiden test flight of a Reusable Launch Vehicle-Technology Demonstrator at the Satish Dhawan Space Centre at Sriharikota in Andhra Pradesh. “Today, May 23, 2016 ISRO successfully flight tested India’s first winged body aerospace vehicle operating in hypersonic flight regime,” ISRO said in an official statement after the test flight. In the experimental mission an HS9 solid rocket booster lifted the RLV-TD from its launch pad at 7 am to a height of 56 km where the RLV TD separated from the rocket and climbed to a height of 65 km before automatically steering itself back for a landing in the Bay of Bengal some 450 km away from the Sriharikota space station.

“After successfully surviving the high temperatures of re-entry with the help of its Thermal Protection System (TPS), RLV-TD successfully glided down to the defined landing spot thereby fulfilling its mission objectives,” ISRO said in its statement after the flight test. “The vehicle’s navigation, guidance and control system accurately steered the vehicle for safe descent,” ISRO said. The total flight duration from launch to landing of this mission of the RLV-TD was 770 seconds. The RLV was tracked during its flight from ground stations at Sriharikota and a ship terminal.

“In this flight critical technologies such as autonomous navigation, guidance and control, reusable thermal protection system and re-entry mission management have been successfully validated,” ISRO said. The flight test was supported by the Indian coast guard and the National Institute of Ocean Technology (NIOT) for mid sea wind measurements and shipborne telemetry. Dr K Sivan the director of the Vikram Sarabhai Space Centre at Thiruvananthapuram where the RLV is being developed has called the flight test on Monday “a baby step” in realizing a completely reusable space launch vehicle. “There are many technology challenges that have to be overcome before we have an operational RLV. This experiment is only a small step,” Dr Sivan said ahead of the test flight of the RLV TD HEX1.

The development of the RLV despite being on the drawing board at ISRO for a few years now had taken a back seat as the space agency focussed on the GSLV program. The closure of the space shuttle program in the US in 2011 which involves RLV technologies also resulted in the sidelining of the RLV program at ISRO in recent years. Fresh interest in RLVs has been triggered worldwide by the pioneering efforts of private companies like the Elon Musk founded SpaceX in the US – in creating cost effective launch vehicles that like aeroplanes can fly hundreds of times into space during their lifespan. SpaceX has since December 2015 demonstrated twice that apart from the orbital second stage of a rocket even the booster used in the first stage of launch can be brought back to earth and then re-used. SpaceX has projected a June 2016 re-launch of a first stage rocket recovered at sea on April 8, 2016. Apart from SpaceX agencies like Europe’s ESA, Japan’s JAXA and private companies like Blue Origin founded by Amazon founder Jeff Bezos and the Orbital Sciences Corporation are currently trying to develop space launch vehicles that are fully reusable. The RLV -TD that ISRO flew on Monday morning at Sriharikota is the first step in an Indian effort to develop a Two Stage To Orbit (TSTO) fully reusable vehicle. The hypersonic flight experiment (HEX) on Monday will be followed by a landing experiment (LEX), a return flight experiment (REX) and a scramjet propulsion experiment (SPEX) in the coming days.

Though manned space flight is the ultimate goal of RLVs the major advantage of development of an RLV is the reduction in cost of space launches and space travel itself. “Nearly 80 to 87 per cent of the cost in a space launch vehicle goes into the structure of the vehicle. The costs of propellants is minimal in comparison. By using RLVs the cost of a launch can be reduced by nearly 80 per cent from the present cost,” says the VSSC director Dr K Sivan. “The cost to refuel a rocket with oxygen is only $ 200,000 to $ 300,000 but the cost of the rocket is itself $ 60 million. It is kind of like an aircraft. An aircraft is expensive to construct and buy but not to refuel – relatively speaking. If you got a rocket that can be fully and rapidly re-used the cost reduction is somewhere like 100 fold,” SpaceX founder Elon Musk said in April this year after successfully demonstrating a soft landing for a first stage booster rocket used on the company’s Falcon 9 rocket – for launching the Dragon space shuttle to the International Space Station. “I am hopeful that other launch providers will head in the direction of re-usability. I think it is quite fundamental. It is as fundamental in rocketry as it is in other forms of transport such as cars or planes or bicycles,” Musk said in April.