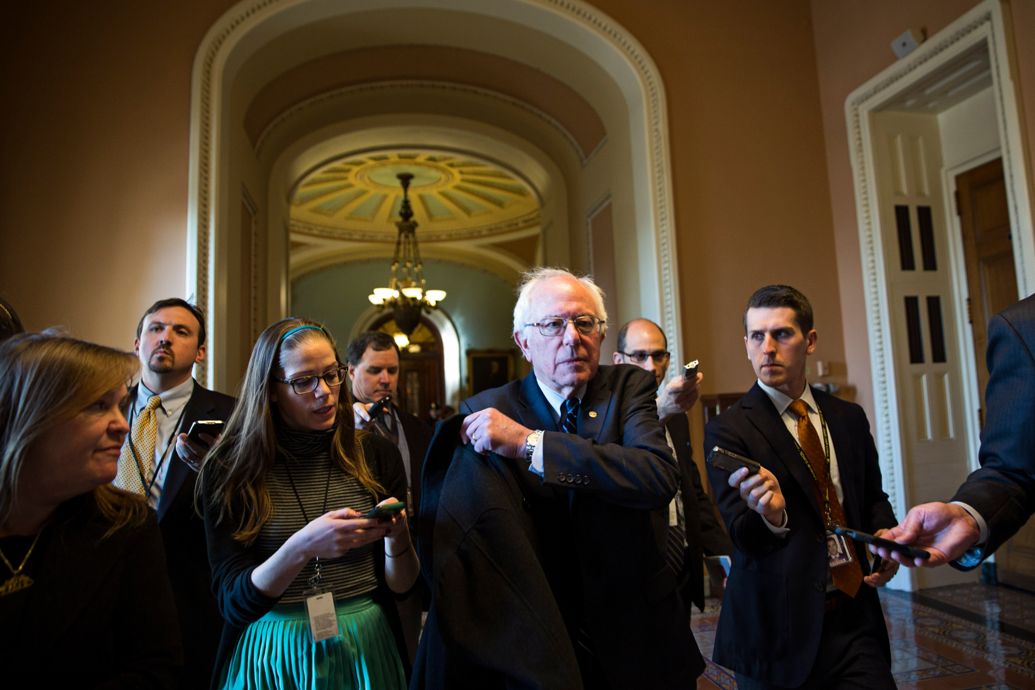 The New York Times ran a piece about Bernie Sanders Monday, a sort of left-handed compliment of a legislative profile. It was called "Bernie Sanders Scored Victories for Years Via Legislative Side Doors."

I took notice of the piece by Jennifer Steinhauer because I wrote essentially the same article nearly 11 years ago. Mine, called "Four Amendments and a Funeral," was a Rolling Stone feature. Sanders back then was anxious that people know how Congress worked, and also how it didn't work, so he invited me to tag along for weeks to follow the process of a series of amendments he tried (and mostly succeeded) to pass in the House.

I came to the same conclusions that Steinhauer did initially: that Sanders was skilled at the amendment process and also had a unique ability to reach across the aisle to make deals.

"Sanders is the amendment king of the current House of Representative. Since the Republicans took over Congress in 1995, no other lawmaker… has passed more roll-call amendments (amendments that actually went to a vote on the floor) than Bernie Sanders. He accomplishes this on the one hand by being relentlessly active, and on the other by using his status as an Independent to form left-right coalitions."

Steinhauer the other day wrote very nearly the same thing. She described how Bernie managed to get a $1.5 billion youth jobs amendment tacked onto an immigration bill through "wheeling and dealing, shaming and cajoling."

The amendment, she wrote, was "classic Bernie Sanders," a man she described as having "spent a quarter-century in Congress working the side door, tacking on amendments to larger bills that scratch his particular policy itches, generally focused on working-class Americans, income inequality and the environment."

Now, Steinhauer's piece wasn't all flattering. This is, after all, the New York Times, which has practically been an official mouthpiece for the Clinton campaign this election season.

Though we both operated on the same set of facts — i.e., that Sanders had an extensive history of building coalitions to pass amendments — Steinhauer implied that Sanders often acted as a kind of lefty obstructionist, using Republicans to thwart more centrist initiatives. "Mr. Sanders is not unlike Tea Party Republicans in his tactics, except his are a decaf version," she wrote.

She added, "While he is unlikely to turn against his party on important votes, he is most proud of the things he has tried, unsuccessfully, to block." She listed the Iraq War, the Wall Street bailout and the Patriot Act as some of those things.

Still, Steinhauer was reluctant to describe Sanders as a mere spoilsport, not someone who "gets things done," as is often said of Hillary Clinton.

"But in spite of persistent carping that Mr. Sanders is nothing but a quixotic crusader," Steinhauer wrote, "he has often been an effective, albeit modest, legislator."

Given how tough the Times has been on Sanders this election season (in October, the paper even sank to writing an article about his failure to kiss enough babies), the Steinhauer piece was actually sort of flattering. Sanders himself linked to the article. Maybe the paper was coming around?

Not so fast! As noted first in this piece on Medium ("Proof That the New York Times Isn't Feeling the Bern"), the paper swiftly made a series of significant corrections online. A new version of the piece came out later the same day, and in my mind, the corrections changed the overall message of the article.

First, as noted in the Medium piece, they changed the headline. It went from:

Bernie Sanders Scored Victories for Years Via Legislative Side Doors

Then they yanked a quote from Bernie's longtime policy adviser Warren Gunnels that read, "It has been a very successful strategy."

They then added the following two paragraphs:

"But in his presidential campaign Mr. Sanders is trying to scale up those kinds of proposals as a national agenda, and there is little to draw from his small-ball legislative approach to suggest that he could succeed.

"Mr. Sanders is suddenly promising not just a few stars here and there, but the moon and a good part of the sun, from free college tuition paid for with giant tax hikes to a huge increase in government health care, which has made even liberal Democrats skeptical."

This stuff could have been written by the Clinton campaign. It's stridently derisive, essentially saying there's no evidence Bernie's "small-ball" approach (I guess Republicans aren't the only ones not above testicular innuendo) could ever succeed on the big stage.

The second paragraph just reeks of a passage written by an editor. It's horrible English. Attention, New York Times: "A few stars here and there" is actually more than "the moon and a good part of the sun."

There were other changes, as noted in the Medium piece. The salutary line about Sanders being an "effective, albeit modest legislator" – a key passage that in the original article directly contradicted the Clinton-camp contention that Sanders can't "get things done" – is now followed by a sort of disclaimer:

"He has enacted his agenda piece by piece, in politically digestible chunks with few sweeping legislative achievements in a quarter-century in Congress."

Right. He's effective, except for the part where he hasn't had any significant achievements in 25 years.

Worse, the line about "tacking on amendments to larger bills that scratch his particular policy itches" has now, absurdly, been rewritten to read:

"…tacking on amendments to larger bills to succeed at the margins."

I reached out to Steinhauer, whom the paper put in a very uncomfortable position by making such extensive edits in public. She essentially replied that in the Internet age, this sort of stuff is routine, and articles evolve.

"The good part about digital publishing is that we get more things to our readers more quickly but it also means that complete editing sometimes comes ends at the end of the day," she said. "Two or more versions are now pretty common with all our work, as you probably know."

Well, not so much, actually. Online content does change a bit from time to time, but I've never been in a situation where an editor has asked me to alter the overall meaning of a piece, which is what happened in this case.

Steinhauer's article as originally published told a story about how effective Sanders has been at getting amendments passed. It's more or less the same story I wrote back in 2005, an essentially positive take that even Sanders liked enough to publicize.

The new version, though, reads very differently. In it, Sanders is described as a "small-ball" legislator whose career has been spent doing unimportant little things. The focus of the piece is now less on the what of his legislative victories than on the where: the margins.

This is a substantively different message than the first piece, and certainly not flattering. You won't find the Sanders camp linking to it.

The Times has taken a lot of heat from Sanders fans for not covering him enough and for its generally sarcastic approach to his run. And at times, the paper's editors have seemed to tone things down in response to criticism. They even removed a description of him as a "Grumpy Old Socialist" in the headline to this piece.

If you're a Sanders fan, that's great, but it's not like the paper is under any obligation to be nice. It's not. It's a private company and it can take any editorial line it wants.

But this kind of stuff is pathetic. Jennifer Steinhauer is right, we do make tweaks all the time. But usually changes are minor and factual in nature. You fix a wrong number or a misspelled name, maybe, or at most you'll chip away at a passage to make it flow a little better.

A change to a quote by John McCain in this piece is an example of something that just feels like a routine fix. The original passage had McCain talking about an amendment he worked on with Bernie to expand care for veterans.

It was a long quote and in the new version, the Times yanked the last sentence, which read, "It was the first real reform of the V.A. ever." But it still has McCain calling Bernie an "honest liberal" and describing him as "very effective."

There was not much of a substantive change there. They just made a long quote shorter, which is something we do in this business all the time (ideally before publication, of course, but I guess these days after is becoming the norm, too).

But the rest of these changes go to the heart of the meaning of the article, which is unusual and seemingly a nasty thing to do to the reporter, particularly since the changes read like talking points added by a Clinton aide. I would go ape if an editor pulled something like that on me in public.

If you're Sanders, you now know what's going to shake loose when reporting about you goes upstairs to the Times editors. It's not immoral or anything, just sort of crass. And odd, that they don't care that their readers now know, too.