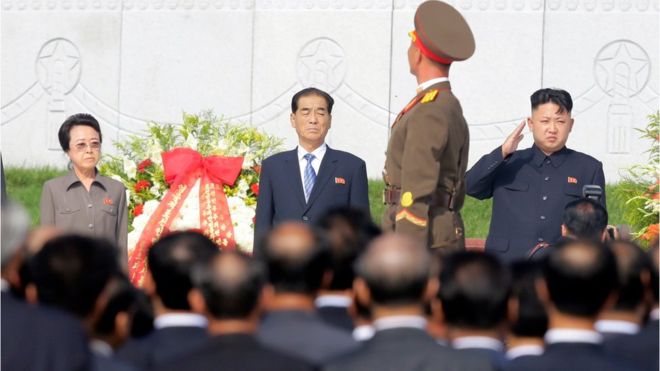 An aunt of the North Korean leader Kim Jong-un has been running a dry-cleaning business in the US after defecting with her family in 1998, the Washington Post reports.

Ko Yong-suk told how she looked after Kim when he was at school in Switzerland.

The CIA, which reportedly helped them buy a house after their defection, has not confirmed or denied her claims.

In a wide-ranging interview with The Washington Post, Mrs Ko set out how she was sent to Switzerland with her husband, to look after members of the ruling family studying there.

She remembers Kim Jong-un as "short-tempered" and with a "lack of tolerance".

'I changed their diapers'

Although Mrs Ko has not seen her nephew for nearly 20 years and does not appear to have held an official position, some of the details revealed in the interview shed new light on the patchy information available about the North Korean leader.

"He and my son were playmates from birth. I changed both of their diapers," she told the newspaper.

Another insight that will catch the attention of Korea observers is that Kim allegedly knew from 1992 that he would become the North Korean leader.

The signal was sent at his eighth birthday party, attended by North Korea's top brass, she said.

The rest of the world learnt this during the North Korean Workers' Party Conference of 2010.

It remains unclear why the family defected to the US.

The Washington Post suggests it may have been out of fear that they would fall out of favour after Kim's mother, who had breast cancer, died.

After months of questioning by the CIA, the family moved to the US and set up a dry-cleaning business.

Mrs Ko considers herself lucky. "My kids went to great schools and they're successful, and I have my husband, who can fix anything. There's nothing we can envy," she told the Washington Post.

Her husband agrees, saying "I think we have achieved the American Dream".

Mrs Ko came to public attention last year when she filed a defamation case against three defectors for allegedly spreading false stories about her.