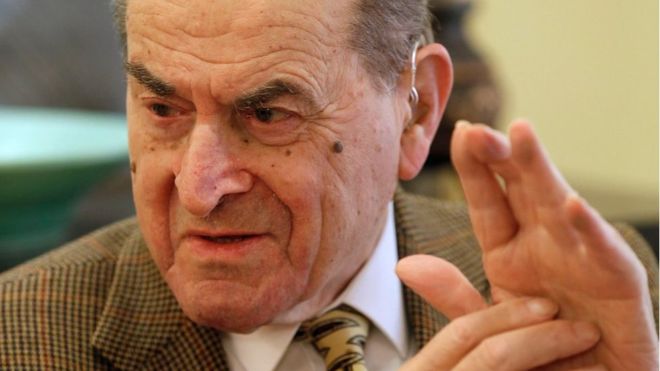 The 96-year-old American inventor of the Heimlich manoeuvre has used the technique himself to save a choking woman at his retirement home.

Dr Henry Heimlich said he had demonstrated the technique many times but never used it in an emergency.

His action dislodged a piece of meat with a bone in it from the 87-year-old woman's airway.

"I didn't know I really could do it until the other day," he told the BBC.

Dr Heimlich was having dinner with eight or nine others at the Deupree House retirement home in Cincinnati when he turned to talk to a woman at his table and noticed she was choking.

"She had a skin colour that was no longer pink. Her mouth was puffed up and her lips were out," he told the BBC.

"Though I invented the Heimlich manoeuvre I had never been called on to do it before."

How easy is it to do the Heimlich manoeuvre?

Dr Heimlich described how he turned the woman, Patty Ris, around in her chair so her back was exposed.

The manoeuvre requires a rescuer to carry out abdominal thrusts on a choke victim to dislodge the blockage.

"I did it three times and a piece of meat with a bone in it came flying out of her mouth and she was all right," he said.

Staff had rushed to the table when the woman started choking, but stood back to allow Dr Heimlich to carry out his manoeuvre.

"Just the fact that a 96-year-old man could perform that, is impressive," his son Phil Heimlich told the Cincinnati Inquirer.

Dr Heimlich, who invented the technique in 1974, swims and exercises regularly.

He often meets people who were saved by the technique or who saved someone else, his son said.

Since the technique was introduced in 1974 it is believed to have saved the lives of more than 100,000 people in the US alone.

In 2014 actor Clint Eastwood was credited with saving the life of a golf tournament director in California who was choking on a piece of cheese.

In the UK, celebrity promoter Simon Cowell was reportedly saved by comedian David Walliams, who carried out the Heimlich manoeuvre on him after a mint became stuck in his throat.