Okinawa base imposes curfew on US troops after woman's death 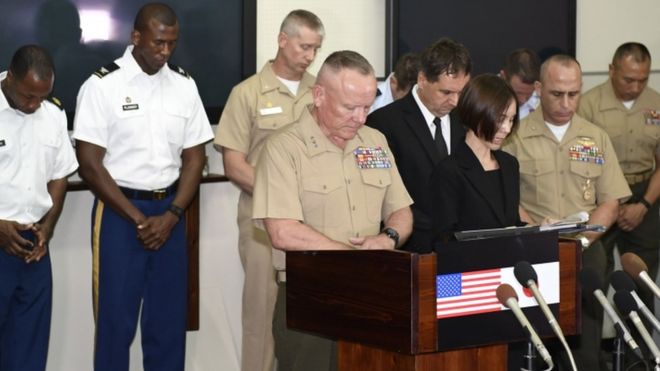 Okinawa base imposes curfew on US troops after woman's death published by Mooba
Writer Rating: 0
Posted on 2016-05-28
Writer Description: Brandon
This writer has written 186 articles.

The US military base on Japan's island of Okinawa has imposed a midnight curfew and a ban on alcohol after the arrest of an ex-Marine suspected of killing a Japanese woman.

There would be no "celebrations and parties while the Okinawan people are in mourning", the military said. The restrictions will run until 24 June.

Kenneth Shinzato, 32, was arrested on 19 May but has not yet been charged.

Many Okinawans resent the US base and the incident has reignited tension.

Prime Minister Shinzo Abe raised the woman's death with US President Barack Obama ahead of the recent G7 summit in Japan.

The Okinawa facility, home to some 30,000 US troops, has banned them from visiting clubs and bars and drinking alcohol off-base.

Festivals and concerts at the base have been postponed.

Marine Corps commander in Japan Lt Gen Lawrence Nicholson said at a news conference: "We should not be out shooting fireworks... If we really believe we are part of the Okinawan community, then we too must be in mourning. And we do."

He said: "There are no words in the English language that can adequately convey our level of shock, pain and grief at the loss of life of this innocent victim.

"My request to the Okinawa people is simple: please do not allow this terrible act of violence to drive a wedge between our two communities."

The ban also applies to military families and civilians employed by the military.

Kenneth Shinzato, a US military worker in Okinawa, was arrested on suspicion of dumping a woman's body.

The body of the 20-year-old woman, missing since April, was found at a location he gave.

Police say the man admitted abandoning the body. They also suspect he killed her but have not charged him with this yet.

A suspect can be held for 21 days before charges must be brought.

In 2013, US troops throughout Japan were placed under a night-time curfew after two US sailors pleaded guilty to the rape of a Japanese woman on Okinawa.

In 1995, the rape of a 12-year-old girl on Okinawa by US servicemen prompted mass protests.

The Okinawa base houses about half of all US troops in Japan. There are plans to relocate part of it - the Futenma air base - to a less-populated area of the island, but many Okinawans want the air base removed altogether.