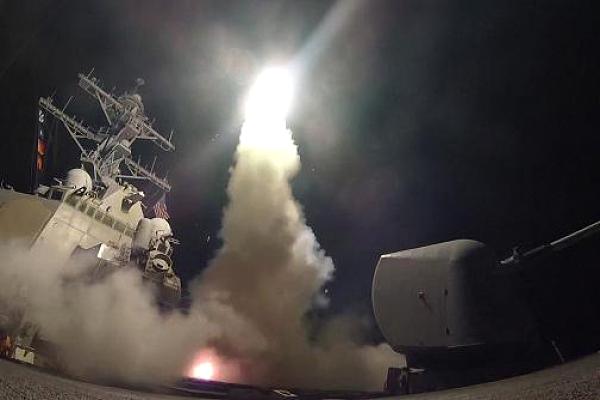 Trump launches attack on Syria with 59 Tomahawk missiles published by The 1st Amender
Writer Rating: 3.0000
Posted on 2017-04-07
Writer Description: Loves to blog and debate
This writer has written 205 articles.

The U.S. military attacked a Syria-government airfield with 59 Tomahawk missiles on Thursday evening.

The missiles targeted the Shayrat air base near Homs, and were in response to a Tuesday chemical weapons attack. Officially announcing the strike, President Donald Trump said the targeted airfield had launched the chemical attack on a rebel-held area, and he called on other nations to oppose Syria's embattled leader.

"On Tuesday, Syrian dictator Bashar al-Assad launched a horrible chemical weapons attack on innocent civilians. Using a deadly nerve agent, Assad choked out the lives of helpless men, women and children. It was a slow and brutal death for so many. Even beautiful babies were cruelly murdered in this very barbaric attack," Trump said Thursday night.

A U.S. defense official called the U.S. strike a "one-off," Reuters reported. Nine civilians including four children were killed, the Syrian state news agency claimed, but the Pentagon said civilians were not targeted.

On Thursday, Secretary of State Rex Tillerson said Russia had failed to carry out a 2013 agreement to secure Syrian chemical weapons, adding that Moscow was either complicit or incompetent in its ability to uphold that deal.

Tillerson said the U.S. had a high degree of confidence that sarin nerve gas had been used in Tuesday's chemical attack in northern Syria.

The Pentagon released details on the strike, saying it was conducted using Tomahawk missiles launched from the destroyers USS Porter and USS Ross in the eastern Mediterranean.

The Pentagon called the U.S. airstrikes a "proportional response to Assad's heinous act." No people were targeted, an official told NBC.

Additionally, Russian forces were notified in advance of the strike, according to the Pentagon. "U.S. military planners took precautions to minimize risk to Russian or Syrian personnel located at the airfield," Davis said.

Still, Tillerson said the U.S. "sought no approval from Moscow."

Syrian armed rebels welcomed the strike. Ahrar al-Sham, an opposition group backed by Gulf states responded: "The armed opposition welcomes any U.S. intervention through surgical strikes that would deter the Assad regime capabilities to kill civilians and shorten the suffering of our people."

President Donald Trump speaks at Mar-a-Lago in Palm Beach, Fla., Thursday, April 6, 2017, after the U.S. fired a barrage of cruise missiles into Syria Thursday night in retaliation for this week's gruesome chemical weapons attack against civilians.

Earlier Thursday, Reuters reported that a British diplomat had said the United Nations Security Council would not vote Thursday on a draft resolution to condemn Tuesday's gas attack, but will continue negotiations.

The Russian response on Friday morning said the strikes violated international law and would do significant damage to relations between Russia and the U.S. The Russian news agency Interfax reported comments from the Kremlin which said the strikes had happened under a "far-fetched pretext." Kremlin spokesman Dmitry Peskov said that President Vladimir Putin believed the U.S. attacks on Syria showed aggression against a sovereign state.

Tuesday's attack in the town of Khan Sheikhoun

Republican U.S. Sen. Marco Rubio appeared to be tweeting about an American offensive action in Syria, posting at 8:44 p.m. ET, "'Be sure of this: The wicked will not go unpunished' Proverbs 11:21 #SyriaChemicalAttack"

"Be sure of this: The wicked will not go unpunished" Proverbs 11:21 #SyriaChemicalAttack

The United States, Britain and France proposed a draft U.N. resolution on Tuesday to condemn the attack and press Syria to cooperate with international investigators. Russia said the text was unacceptable, and it proposed a rival draft.

A Security Council resolution needs nine votes in favor and no vetoes by the United States, Britain, France, Russia or China to pass.

—Reuters contributed to this report.