Nazi Does Not Equal Right Wing. Here's Why. 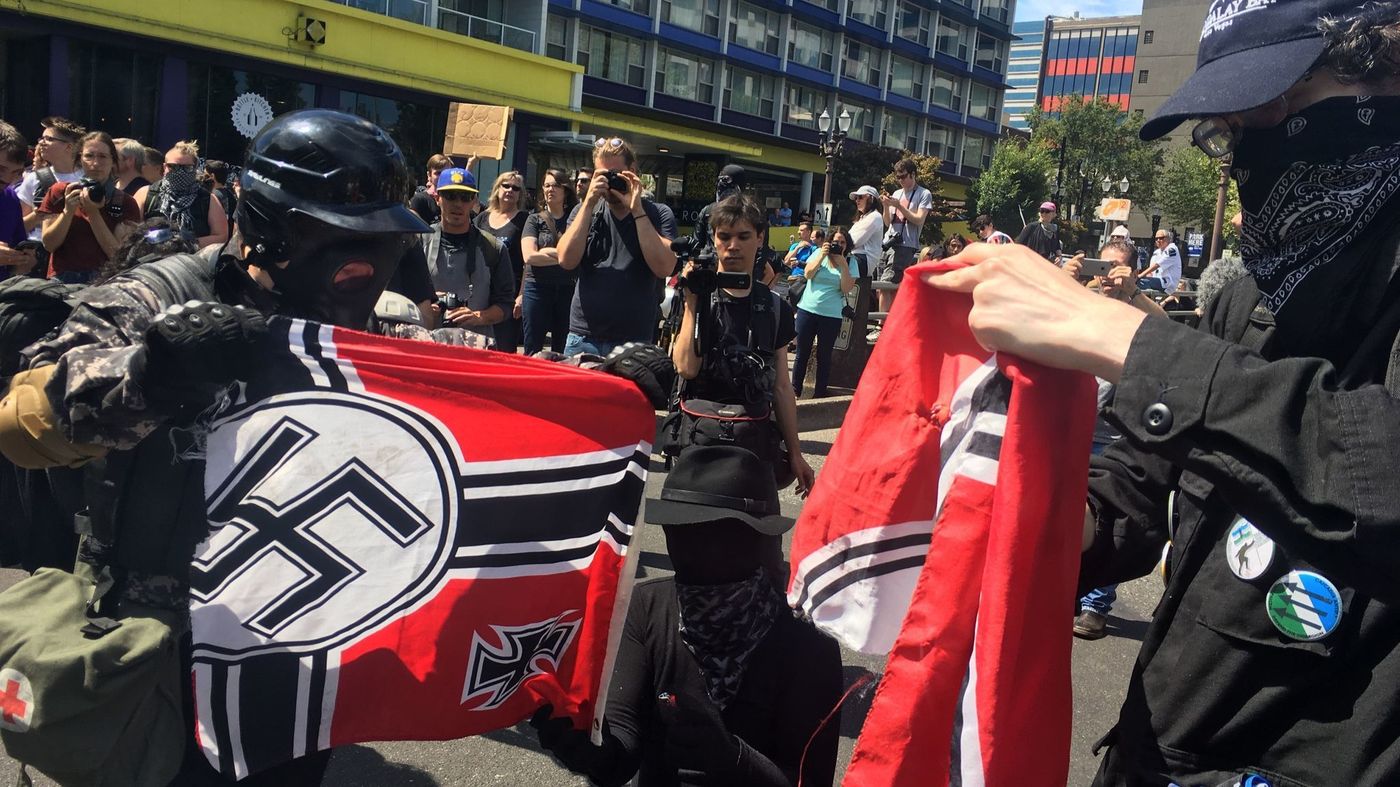 Nazi Does Not Equal Right Wing. Here's Why. published by The 1st Amender
Writer Rating: 3.0000
Posted on 2018-11-21
Writer Description: Loves to blog and debate
This writer has written 207 articles.

After debating with many leftists on the political beliefs of the right, it has come to my attention that people do not know what a Nazi's ideology really is.  I dislike having to debate a subject and them blatantly misunderstand where they really lie on a political spectrum.  Take this example:

You have heard it again and again. Fascism is the definition of a right wing ideology. Ah. So someone looks at something authoritarian by premise and that must make it right. Hm. Sorry I don't buy that because it is simply wrong. You're missing facts. And anyone else who buys that is simply wrong. How? Let's begin by breaking down the left and the right. The left and right is two totally separate spectrums of economic principle over social principle. If you in the United States our understanding of the political spectrum is extremely limited. Take for example a hardcore communist. Where on the left does a hardcore communist exist in the spectrum of the USA politics? Even Hillary can be seen as a moderate in the face of a communist!

Then you have people who are both authoritarian and libertarian. These people are on a completely different spectrum, but are interchangeable with the left and right. Take for example a right wing libertarian is someone like Friedrich Hayek, Ludwig Von Mises, Milton Friedman, and Ayn Rand. These people believe in individual liberty (While being hardcore believers in private economics). 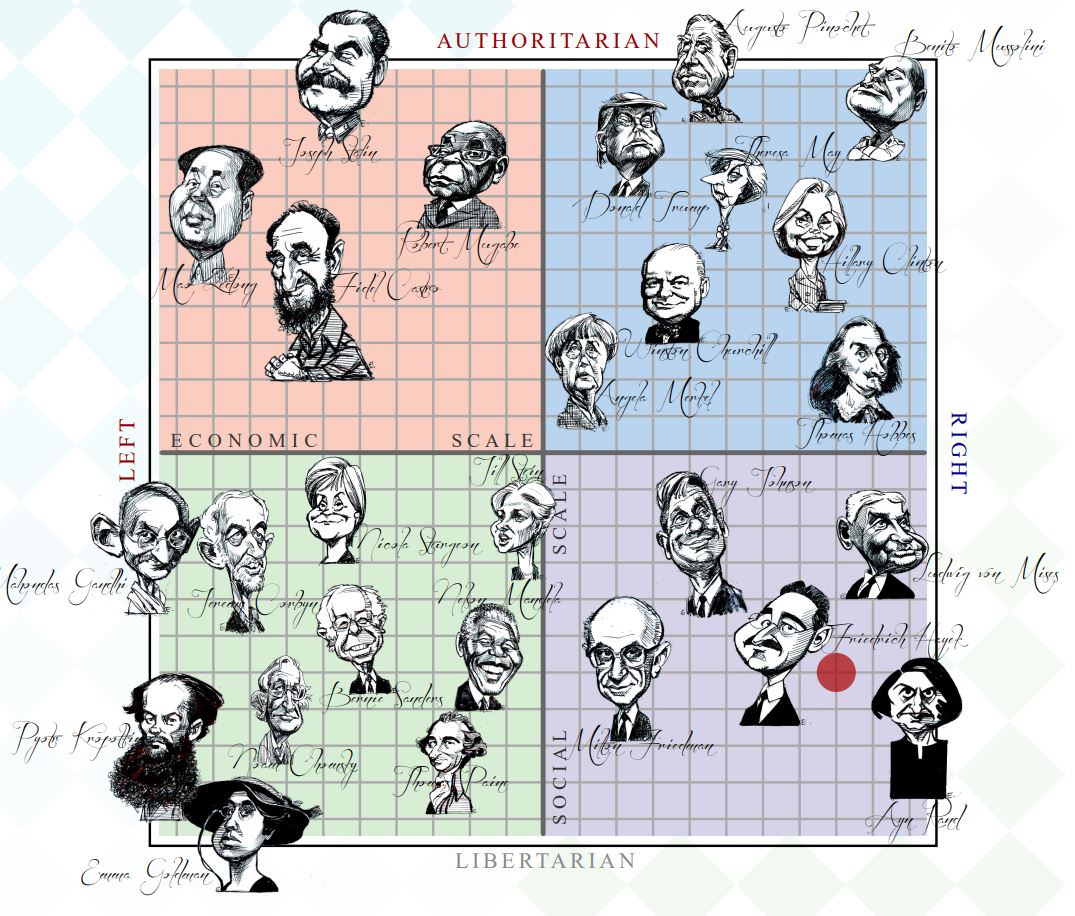 (Picture provided by thepoliticalcompass.org, you can take a test to see where you land, as an additional note, I land on the red dot)

Before someone goes to renounce thepoliticalcompass.org, please understand where that website is coming from. It has been a go-to to understand the political principles across people throughout the world and not just subject to the existence of politics to just the USA. It has been used as a political understanding "Bible" to many people of influence. Oxford, Brookhaven College, Boris Johnson (Mayor of London), and more. You can see exactly who has used it in the past here.  Now the question of the Nazi ideology is really where they land to figure out if a fascist is really about as right wing as people seem to think. Where does Hitler land on the economic compass? Straight from the political compass website shows Hitler is a hardcore authoritarian through and through. I don't think anyone can debate that subject.

Now you ask, left or right? Most would say right. But as it turns out, a lot of social programs and government assistance existed during his conquest of the perfect race. The full name of the Nazi party doesn't help either.  The full name of the Nazi party is: "The National Socialist German Workers' Party" (German: Nationasozialistische Deutsche Arbeiterpartei)(source: Jones, Daniel (2003) [1917]. Roach, Peter; Hartmann, James; Setter, Jane, eds. English Pronouncing Dictionary. Cambridge University Press. ISBN 3-12-539683-2.) To bring things into further perspective, you can find documentation to prove the socialist principles of a Nazi.

Now please understand me. I am not trying to link up social programs with being evil or associated with evil. That is a totally separate discussion that deserves it's own article alone. I just want to point out exactly where Hitler would land on either the left or the right. You have a man who believed heavily in economic principles (right) and in social welfare programs (left).  So really at the end of the day, he lands dead center between the left and the right. 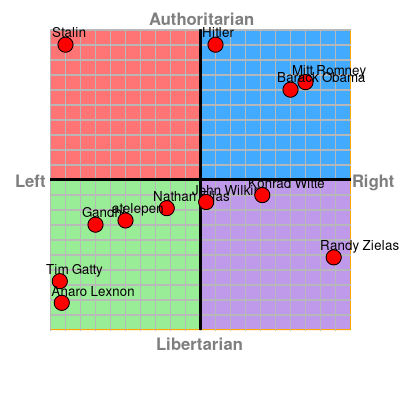 There he is. Right on the top. Not left as Stalin mind you. But definitely not as Right as Mitt Romney and Barack Obama. The point I'm trying to make here is: "Hitler is not right wing. Fascism is not right wing. If anything, it's up-wing." Socialism is up-wing. Authority over liberty. Collectivism over individuality. Stop pointing out Hitler being on the right. He's not. Antifa and Nazis are on the same side of the liberty coin. Both are authoritarians that seek to collectively destroy everything this country was founded on. Nazi is not right wing. Nor is it left wing. True and simple.