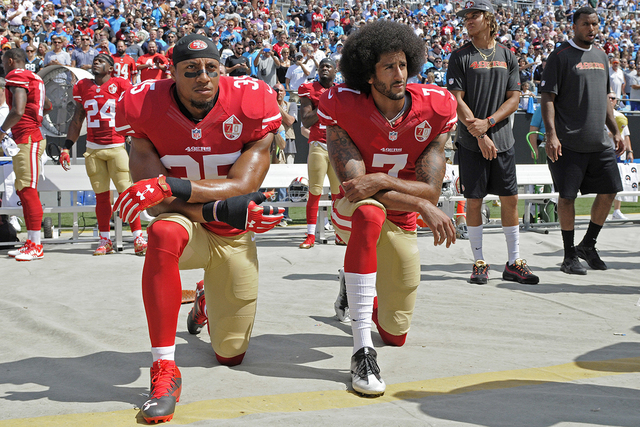 The whole concept of taking a knee has been a structure for debate among many football fans. One of the basic premises of this is that they simply do not feel proud for their country. There is the national anthem which plays, then the football player takes a knee in protest for whatever it may be. We've seen it several events of football players taking this stance. This has been seen as a highly controversial topic, especially with Americans that are proud of their country.

Some of the things they have protested have been:

Demonstrations have revealed in general mixed reactions. Some saying it to be a good thing and others to be terrible. I have heard many people say: "They should make them stand for the national anthem because that is their job to do so." Additionally: "We live in the U.S.A. and they should stand for their anthem. You know how many people died for that flag?"

I agree. People did die for that flag. They died so we have the freedom to live in a government that is not despotic. This includes a forced standing in front of a flag to show your nationalistic intent. As a libertarian, I am not one to wish force upon other people. When your government forces you to stand for a flag that many people have died for, then the people would have died just to have their own government destroy that right.

People have the right to stand or not stand. It is up to the individual. And to that is my statement to all who look upon people like Colin Kaepernick with disdain. Our men died so people like him have a choice to make the decision on their own.