DACA - And the Real Harms Explained 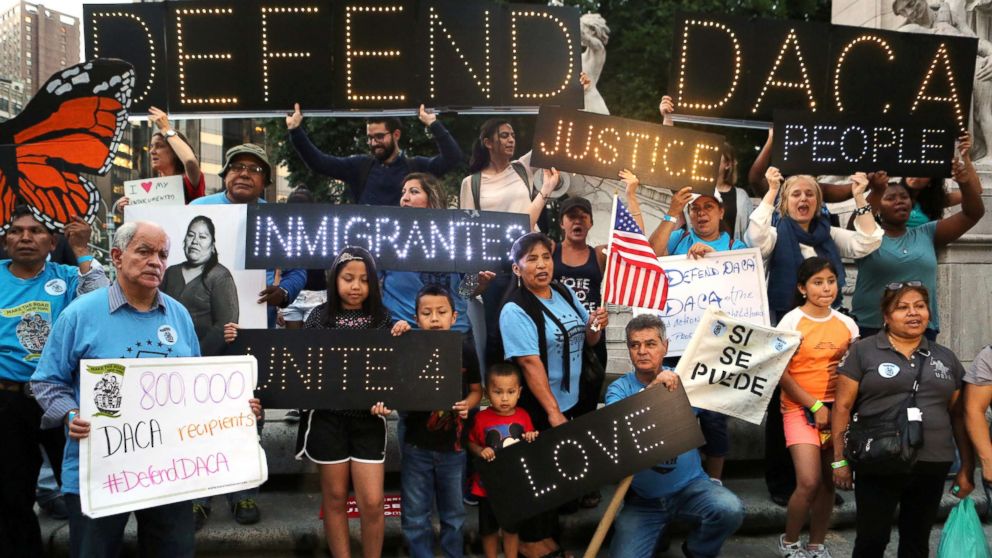 DACA - And the Real Harms Explained published by The 1st Amender
Writer Rating: 3.0000
Posted on 2018-12-21
Writer Description: Loves to blog and debate
This writer has written 205 articles.

Note: Please understand that this is not intended to be a partisan issue. Wherever you land on this partisanship, for or against DACA, it affects you personally as it affects your economy. So let's get off our soap boxes and start to point out the strange world that is DACA.

DACA (Deferred Action for Childhood Arrivals) is an American immigration policy which allows individuals who were brought to the United States illegally as children to receive a renewable two-year period of deferred action from deportation to become eligible for a work permit in the United States. Recipients are not allowed to have any felonies or serious misdemeanors on their record. DACA does not provide a path to citizenship for recipients, which are known as dreamers. It was under President Barack Obama on June 15, 2012 when USCIS (US Citizenship and Immigration Services) began accepting applications for this program.

In 2014 of November, Obama had announced the desire to expand DACA to cover additional illegal immigrants which was blocked by multiple states in retaliation. Now with President Trump, the US Department of Homeland Security rescinded the expansion on June 16, 2017. Yet DACA still stands around. As it turns out, there is no way for someone who is in the DACA program to become a citizen. There are the true-fire ways to make yourself a citizen (But not if you are in DACA) -- which is to either get married or join the military.

There is no option for joining the military. You receive no ability to join the military as DACA. Yet DACA is authorized to work. You are simply trapped. Additionally, the old trick of getting married with a citizen also does not always work for DACA. In fact most DACA are not eligible to adjust status to that of permanent resident after marriage to a US citizen.

Now for the true story of my friend, Pedro, victim of the DACA trap

My friend Pedro (which is not his real name, but is placed here for sake of protection of that person), is in DACA. He was born in Peru, and when he was still an infant, he was transferred over with his mother to the United States. At the time, the mother then applied for her green card and eventually citizenship. She received that citizenship while the son could do nothing until he turned 18. When he was older he managed to get a workers VISA and could not receive any benefits that a US citizen would have if they applied to college. No college for poor Pedro. Instead, he had to go to a technical college, paying out of pocket.

To make matters worse, he's a hard working man. He takes responsibility for himself and guess what, is a conservative surprisingly. He wants to vote, wants to be a member of society, yet gets nothing of the sort. Additionally, any benefits that are given are taken away, as well as the usual FICA, Social Security, Medicare, and income tax withholding from his paychecks. Currently under DACA, he has no chance to receive any of these benefits. So he will continue to work and pay into the system, all while being shunned away by all politicians that dare mention the name DACA.

This is not the way our country is supposed to be molded into. While we do need to have reasonable immigration control to stop violent offenders, we also need to have open paths to those who are willing to work and wanting to be a part of the community, just as we have always done through the past. Please understand, this is not a partisan issue. Those who make this a partisan issue are those that have an agenda to push, and despite all sense of logic and justice, choose to push this one way or another. This happens on both Republican and Democratic authoritarian stances, both of which I am against. We need to look at it in terms of basic logic. You have people stuck in limbo, and there are millions out there. It was not Pedro's desire to be stuck in DACA, but it happened.

There was a speech by Milton Friedman which is highly relevant, I think those of all partisanships should read, as he is radically more intelligent than I am: "Suppose you go around and ask people the United States as you know before 1914 had completely free immigration. Anybody could get on a boat and come to these shores, and if he landed on Ellis Island, he was an immigrant. Was that a good thing or a bad thing? You will find hardly a soul who will say it was a bad thing. Almost everyone will say that it was a good thing. But then suppose I said to the same people: But now what about today, do you think we should have free immigration? Ohhh no we couldn't possibly have free immigration today! Why -- that would flood us with immigrants from India and god knows where, driven down to a bare subsistence level.

If you have free immigration to where we had it before 1914. Everyone benefited, the people who were here benefited, the people who came benefited. Because nobody would come unless he or his family thought he would do better here then he would elsewhere. And the new immigrants provided additional resources and possibilities for the people already here so that people could mutually benefit. But on the other hand, if you come under circumstances where each person is entitled to a pro-rated share of a pot to take the extreme example. Or even to a low level of the pot, then the effect of that situation is that free immigration would mean a reduction of everybody to the same uniform level.

Because the lawlessness is illegal, then people do not qualify for welfare, social security, for all the other myriads of benefits that we pour out from our left pocket to our right pocket. And so as long as they don't qualify, they migrate the jobs. They take jobs that most residents of this country are unwilling to take, they provide employers with workers of a kind they cannot get. They're hard workers, good workers. And they are clearly better off. If you ever want to know what people prefer, the surest sign is how they vote with their feet. And there is no doubt with how the Mexicans vote. They vote to cross the border with their feet, on their feet, or in any other way they can. By the thousands and perhaps millions for all I know. Illegal immigration if fascinating because it shows not only the main point I'm trying to bring out now. How interconnected are the various aspects of freedom, and how interconnected the problem of governmental arrangements. ..."

The video keeps on going for about 4 minutes more, but you get the overall idea. If you want to hear the full speech it is on this page on the video below.