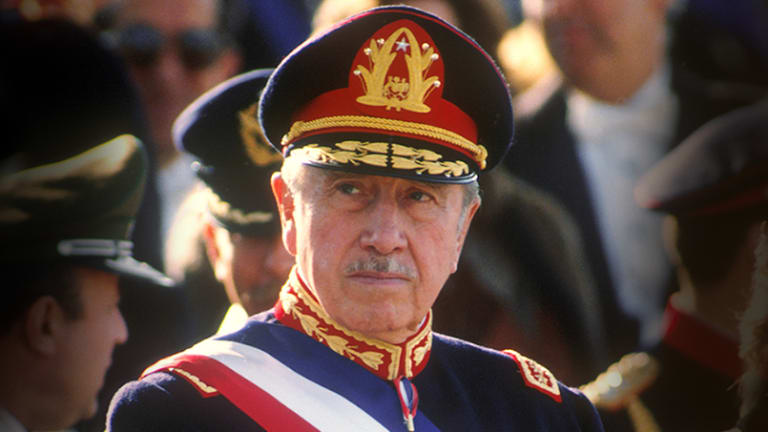 Augusto Pinochet is a man who was a great war general in Chile. This is a story to play on the understanding to the wise words once said by Thomas Jefferson: "Democracy is nothing more than mob rule. Where 51% can take away the rights of the other 49%." Which he wasn't wrong when stating this. Here we have Chile, which was largely becoming more and more democratic in the 1970s. There was democratically elected socialist leader under the name of Salvador Allende. I want to make it clear, Salvador Allende, was a socialist leader and people voted for it.

It has come to my own discovery that socialism is pure death on a country. The harder you lean into the ideology of Socialism the harder the wall collapses. It stops working in a horrific grinding halt that breeds huge instances of poverty and death. I have spent a good amount of time reading about Socialism and what it means, what it would mean, and the instances of application throughout history. None of which have yielded good results. Millions of deaths have been the result of the socialist regimes and have resulted in a lower quality of life for all. Often I find myself wondering: "You have 17 million in Russia killed by the Gulags, over 100 million by Mao Tse Tung, several million killed by the Kim Jong dynasty, Cuba killing many, Venezuela driven to abject poverty and death. Yet with all this proof. All the instances of historical demolition of the Socialist experiment in madness, people still want to try it. And to them my question is: How many more have to die before you get to admit you are wrong?"

Regardless, back into the thought of Allende (I will get to Pinochet). You have a democratically elected president who was Socialist. Bringing the Thomas Jefferson quote into truth. Your populace can willingly vote for the death and destruction of your own country as you know it, and people have to just sit by and peacefully accept their new Socialist government. Not to Pinochet however, and not to the United States.

On September 11th 1973, a coup d'etat was committed by the great war general. Tanks rolled down the streets and killed Salvador Allende. With the help of the U.S.A. (The country that would actively seek to find the seed of Socialism and destroy it before it became a real problem) successfully committed this coup d'etat. Augusto Pinochet took rule and began to collect Socialist sympathizers, Nazis and simply killed them. According to the Chilean government, the number of executions and forced disappearances were 3,095. Pinochet persecuted the leftists, socialists, political critics and resulted in these executions. The internment camp was said to have as many as 80,000 people and the torture of tens of thousands. (2004 Commission on Torture)(Chile to sue over false reports of Pinochet-era missing)

Under the influence of the free market-oriented neoliberal "Chicago Boys", Pinochet's military government assumed an economic liberalization, removed the tariff protections for local industry, got rid of the trade unions and privatized social security and hundreds of state owned enterprises. With these policies, people like Milton Friedman referred to it as the "Miracle of Chile" however critics stating the economic inequality dramatically increased and attribute the devastating effects of the 1982 monetary crisis on the Chilean economy to these policies. (The Cambridge History of Latin America, Vol. VI, 1930 to the Present. Ed. Leslie Bethell)

"We didn't like him. But we needed him at the time. The only problem is he stayed too long, and that's why he is hated so much." ~Wise words of Grandfather, a regular Chilean

The Chilean general ruled from 1973 to 1990 uncontested as a dictator. Pinochet's 17-year rule was given a legal framework through a controversial 1980 plebiscite, which approved a new constitution drafted by a government-appointed commission. In the 1988 plebiscite, 56% voted against Pinochet continuing as President, which led to Democratic elections for the presidency and Congress. After he stepped down in 1990, he continued to serve as the Commander-in-Chief of the Chilean Army until the 10th of March, 1998. He then retired and became a senator-for life in accordance to the 1980 Chilean Constitution. Pinochet was eventually arrested under an international arrest warrant on a visit to London which connected him to numerous human rights violations.

He was facing a legal battle when he was finally released on the grounds of ill-health and returned to Chile on March 3rd 2000. In 2004, Chilean Judge Juan Guzman Tapia ruled that Pinochet was to be placed on house arrest. He finally died on the 10th of December 2006. About 300 criminal charges were pending against him during the human rights violations through his 17-year rule which included tax evasion and embezzlement during and after his rule.

So ends the story of Pinochet. The authoritarian stance to creating a Laissez-faire capitalist regime at no cost. The end result? A bunch of angry leftists. Yet as of today, Chile is currently the wealthiest nation in South America due to their light-touch approach to capitalism. Most in the United States would simply dismiss Pinochet as being a horrific dictator. Others would say he was necessary to save the country.

Additionally, I don't want to overstate the success of Pinochet. Yet I also want to state the negative press on Pinochet, which I will list here.

This is a very complicated issue, but it is interesting nevertheless and thought I would share some light into my musings of an Authoritarian that aligns with me economically, yet not so much for authority versus liberty.