The Power of A Wall 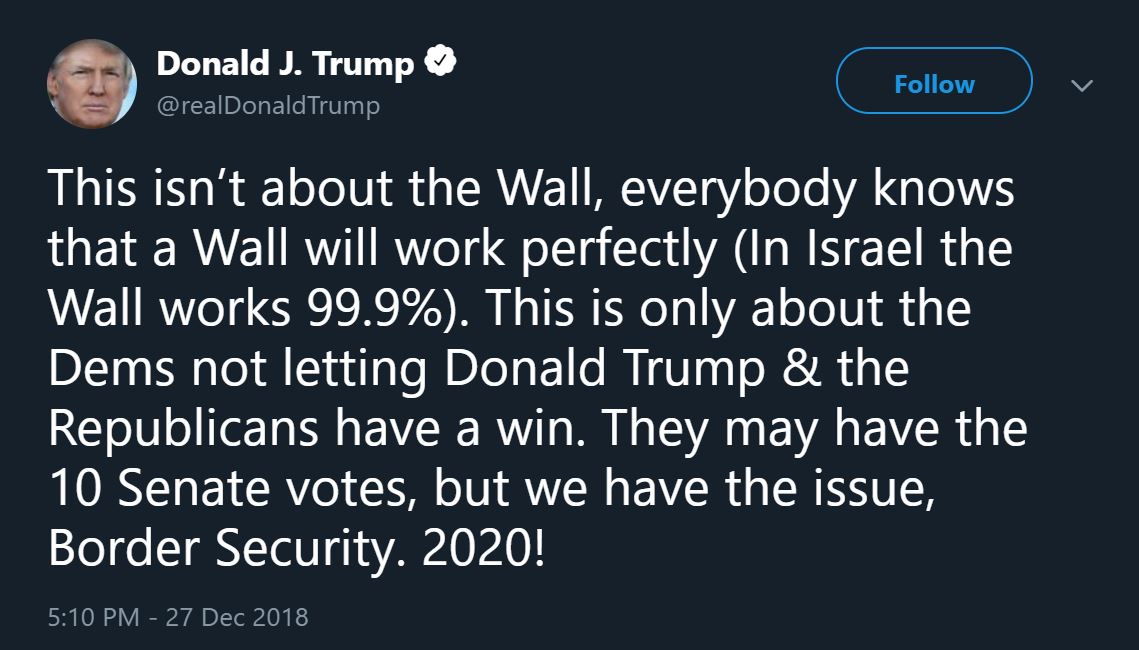 The Power of A Wall published by The 1st Amender
Writer Rating: 3.0000
Posted on 2018-12-28
Writer Description: Loves to blog and debate
This writer has written 205 articles.

Large thumbs have been tack-tack tacking away at an indiscriminate phone, somewhere in Washington, a president fulfilling the people with American promises through Twitter. Nothing against the president, and all of his policies that come with it. I come to talk about the wall. As stated in the tweet just above me:

"Everybody knows that a wall will work perfectly (In Israel the wall works 99.9%). This is only about the Dems not letting Donald Trump & the Republicans have a win. They may have the 10 Senate votes, but we have the issue, border security. 2020!" ~Quote by Donald Trump

It's an interesting quote to blast out. Mostly because of the sudden taste for creation of the wall. My question is: is that what actually stops illegal immigrants from getting into the country? What if they were to lets say, get a plane ride over here? I have people who come from separate countries with their own country's passports time and time again. My family isn't a citizen here, and they come from Chile. Yet somehow by a plane are able to simply fly over here with a passport. So the question is, how hard is it for someone to simply not show up at the airport when it comes time to go home?

This is the interesting part. How high do you plan on making that wall Mr. Trump? I've nothing against you, but I do detest authoritarian actions, and I have been blasting the authoritarian Democrats as of late and I have yet satiated my taste for the authoritarian tactics of the Republicans. How is it that you think a wall will stop a tunnel, many of which have been found and were assisted into creation by the Cartel to get people in and out of the country with ease and no issue with border security. I wonder why they would need something like that! We have no idea how many of these tunnels exist. But we have found many. Thirdly, how good do you think a Mexican is with tools? Just out of curiosity. Without discrimination of course, but let's be frank. A Mexican is quite often handy with a tool set!

Lets say they are in the middle of nowhere on the Mexican border. You have a bunch of hombres with their pick up truck drive right up to the border. To which they grab hammers and blast away the puny wall, which is made little work of with just a few resourceful Mexicans. With the power of a $20 sledgehammer on your billion dollar wall! Yet at the same time, we intend on spending billions in order to create and maintain the wall. So now we look at the current funding of the wall, and amazingly, a Gofundme campaign was created to help create the wall. 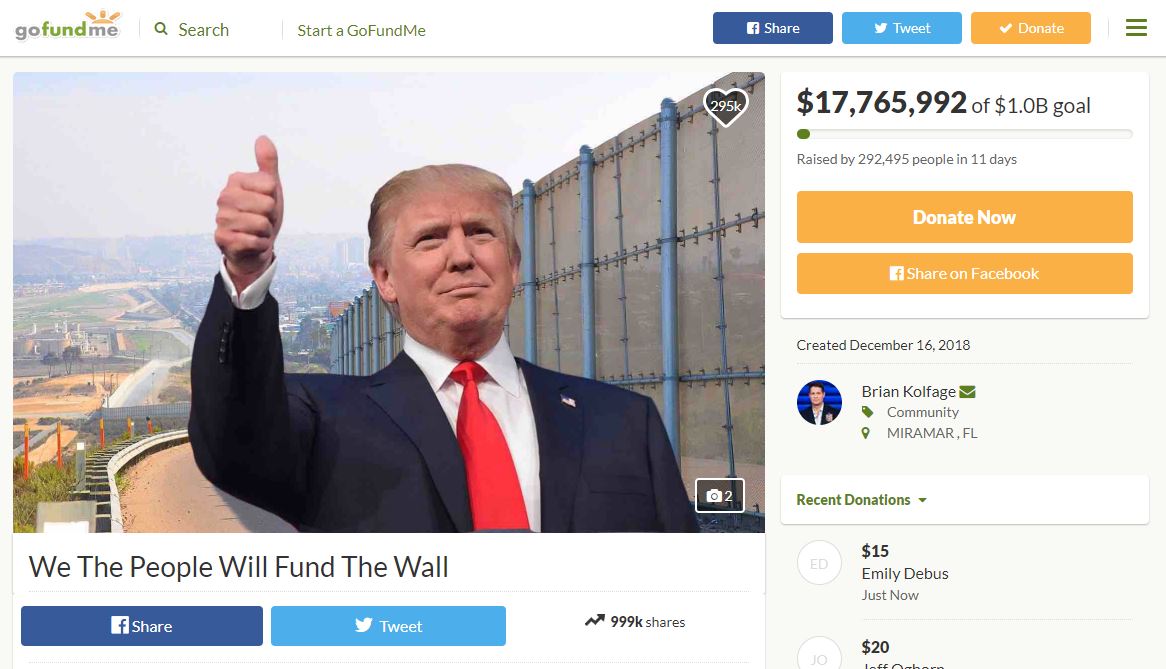 You know. I'm not against this tactic at all. It is a voluntary way to be able to fund programs, and therefore wouldn't take any hard earned tax dollars out of my wallet. I like that idea plenty. Much more than the aggressive authoritarian tactics of collecting tax money from me currently, what with the IRS and all. Yet it still baffles me. I don't understand how a wall is going to stop some Mexicans from getting into the country. People legitimately believe that most people come into the country by simply walking over the border, of which most of these people come in to avoid persecution and try to work. But I won't even bother to get into that with this article.

But think about it, as I said above, you can just take a plane to any country you like with a passport of your country. You come into that country and boom. Wall avoided. Then guess what, The U.S.A. is still stuck with the bill of this fantastical wall that Mexico was going to somehow pay for. Just love it Mr. President. Thinking on your toes I can see.  Now, onto the more serious discussion which was stated by Milton Friedman, Nobel Prize winning economist, which will help in understanding what immigration policy means for the people:

"Suppose you go around and ask people the United States as you know before 1914 had completely free immigration. Anybody could get on a boat and come to these shores, and if he landed on Ellis Island, he was an immigrant. Was that a good thing or a bad thing? You will find hardly a soul who will say it was a bad thing. Almost everyone will say that it was a good thing. But then suppose I said to the same people: But now what about today, do you think we should have free immigration? Ohhh no we couldn't possibly have free immigration today! Why -- that would flood us with immigrants from India and god knows where, driven down to a bare subsistence level.

If you have free immigration to where we had it before 1914. Everyone benefited, the people who were here benefited, the people who came benefited. Because nobody would come unless he or his family thought he would do better here then he would elsewhere. And the new immigrants provided additional resources and possibilities for the people already here so that people could mutually benefit. But on the other hand, if you come under circumstances where each person is entitled to a pro-rated share of a pot to take the extreme example. Or even to a low level of the pot, then the effect of that situation is that free immigration would mean a reduction of everybody to the same uniform level.

Because the lawlessness is illegal, then people do not qualify for welfare, social security, for all the other myriads of benefits that we pour out from our left pocket to our right pocket. And so as long as they don't qualify, they migrate the jobs. They take jobs that most residents of this country are unwilling to take, they provide employers with workers of a kind they cannot get. They're hard workers, good workers. And they are clearly better off. If you ever want to know what people prefer, the surest sign is how they vote with their feet. And there is no doubt with how the Mexicans vote. They vote to cross the border with their feet, on their feet, or in any other way they can. By the thousands and perhaps millions for all I know. Illegal immigration if fascinating because it shows not only the main point I'm trying to bring out now. How interconnected are the various aspects of freedom, and how interconnected the problem of governmental arrangements. ..."

The video keeps on going for about 4 minutes more, but you get the overall idea. If you want to hear the full speech it is on this page on the video below.

Additionally, just for a bit of humor. I included a picture to help supplement my views on the creation of a wall, which was subsequently taken down on Reddit. Apologies to the Reddit moderators, I did not intend to offend. But then again, the spirit of this website is to share content, even if it could be construed as offensive. So without furhter ado here is the picture: 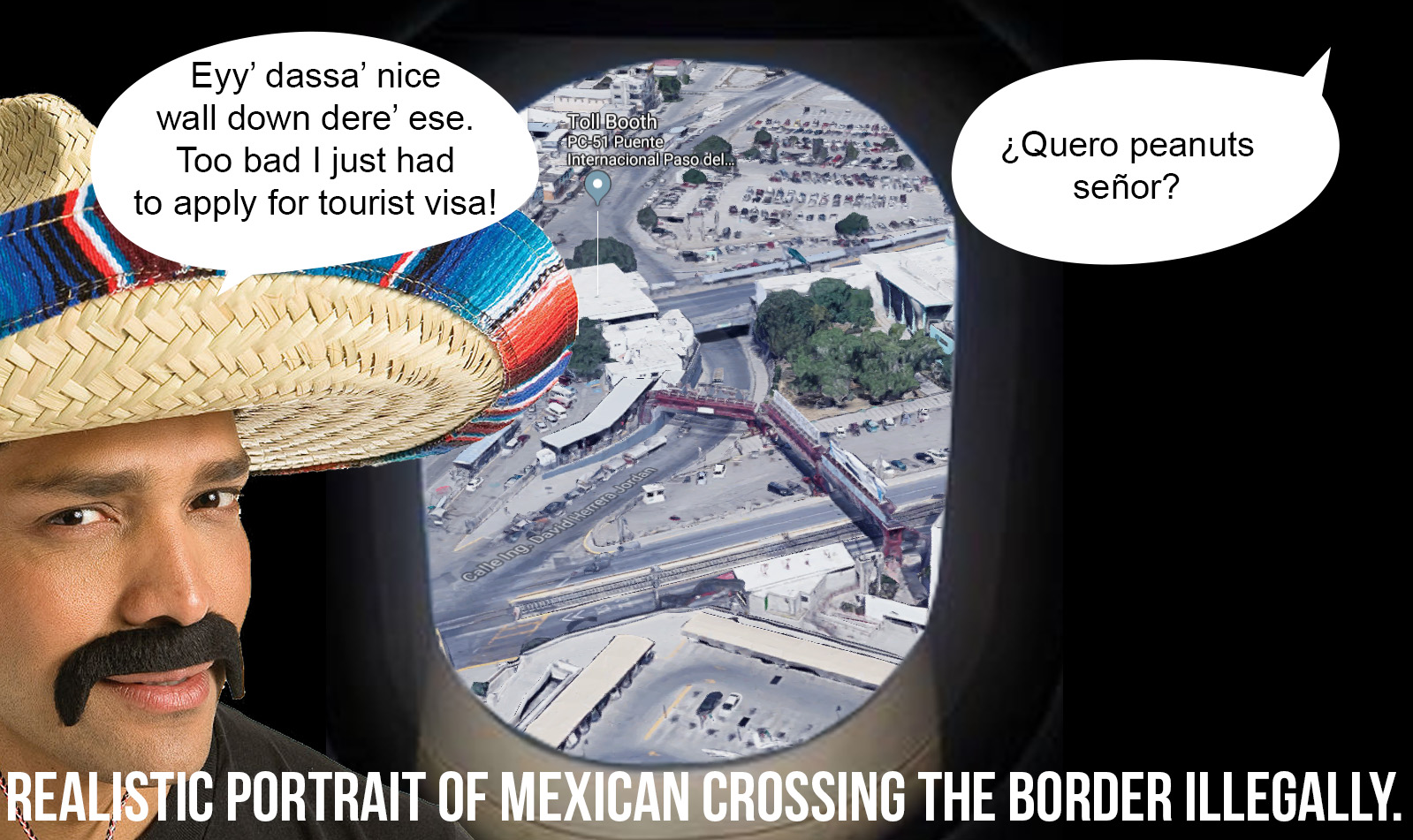 Hey! I thought it was funny!