Targeting Hate-Groups - But Also Conservatives? Pseudo-Big Brother Controlling What People Can Say published by The 1st Amender
Writer Rating: 3.0000
Posted on 2018-12-31
Writer Description: Loves to blog and debate
This writer has written 205 articles. 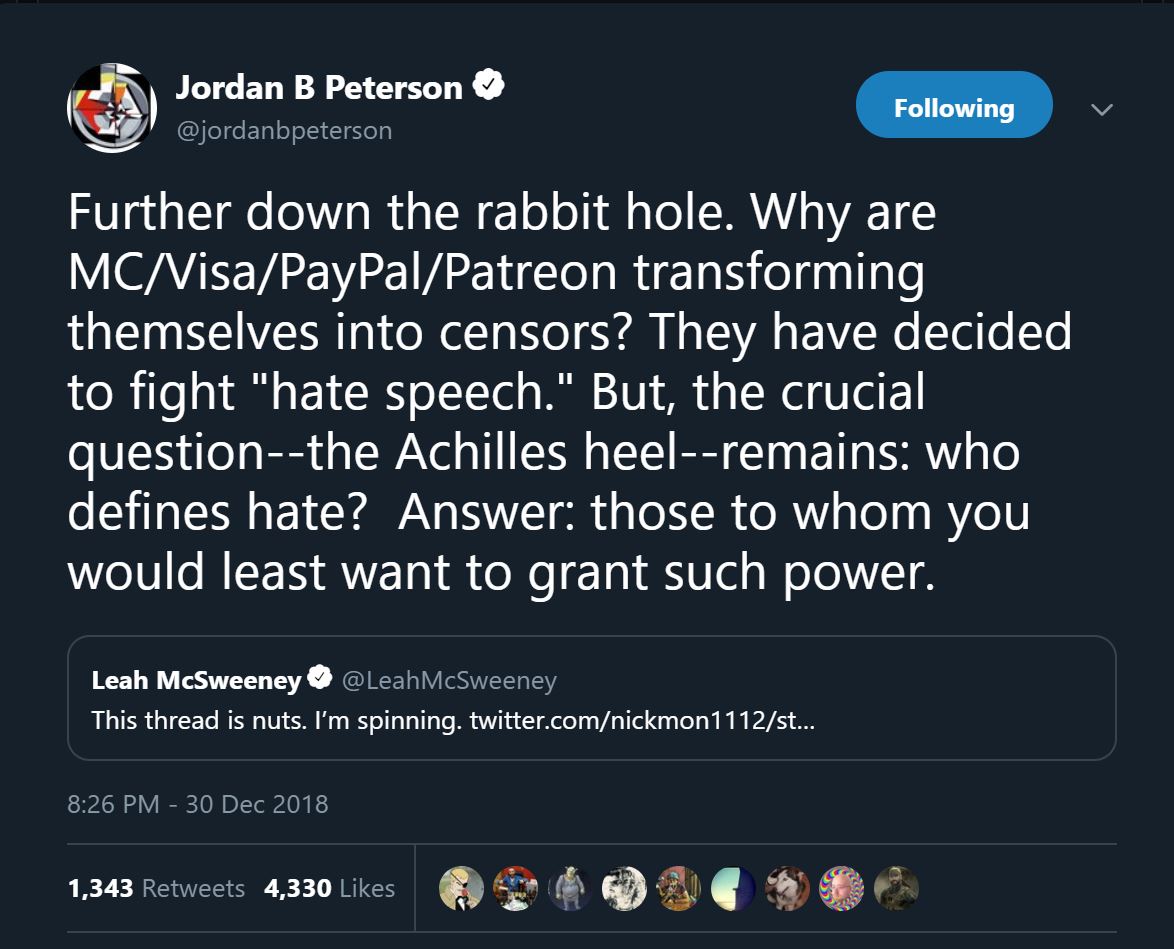 Jordan Peterson, the famous Canadian clinical psychologist and professor of psychology at the University of Toronto pointed out an interesting question on Twitter. You have those with their tin-hat crazies who will get together and say that there is a big brother watching, silencing, and even cutting off your funding to destroy your life if you are doing something they do not like. Well, as it turns out, while the government is not the culprit this time, there is in fact a so-called "big-brother". Who is defining hate? Let's take a look. 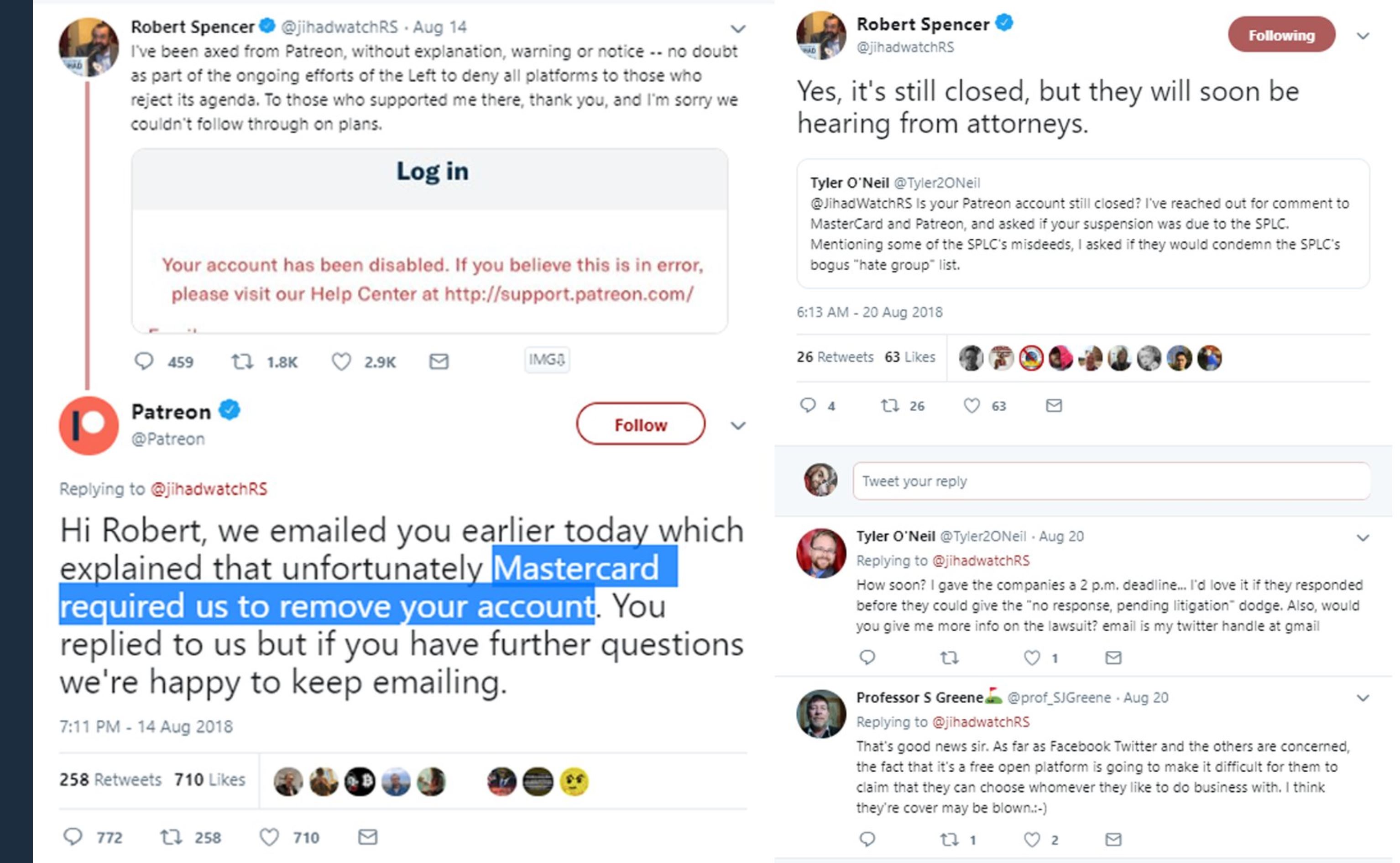 Robert Bruce Spencer, an American author, blogger and a key figure of the "counter-jihad" movement in the United States. Appearing frequently on Fox News and has given seminars to various law enforcement units in the United States. He is your perfect example of a citizen who can be labeled conservative. He has been self-proclaimed as an expert on Radical Islam, having published a number of books on the subject including two New York Times bestsellers. So why would MasterCard request to remove the account? What is the purpose of all this? 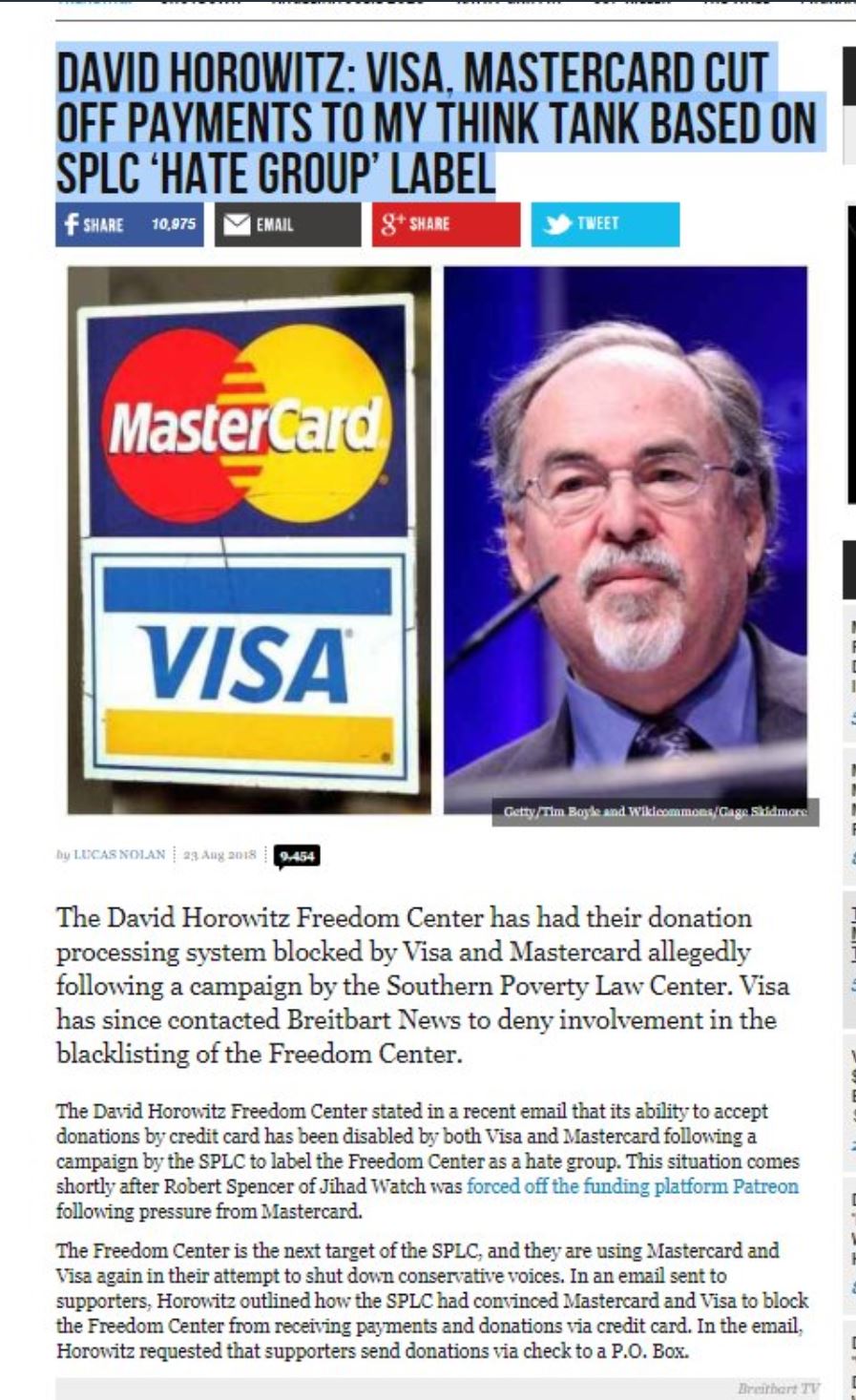 Goodness, we're going pretty deep down the rabbit hole here, with no end in sight.  Now it comes into the question: who is the SPLC? The Southern Poverty Law Center. It is an American nonprofit legal advocacy organization specializing in civil rights and public interest litigation. They are noted for successful legal cases against white supremacist groups, its classification of hate groups and other extremist organizations, and for promoting tolerance education programs. Originally it started with civil cases against the Ku Klux Klan in 1979. With all damages recovered given to victims or donated to other organizations.

The SPLC has become involved in other civil rights causes, which includes cases to challenge what it sees as an institutional racial segregation and discrimination, inhumane and unconstitutional conditions in prisons and detention centers, discrimination based on sexual orientation, mistreatment of illegal immigrants, and the unconstitutional mixing of church and state. The SPLC provides information about it's hate groups to the FBI and other law enforcement agencies. (Michael, George (2012). Lone Wolf Terror and the Rise of Leaderless Resistance. Nashville, Tenn.: Vanderbilt University Press. ISBN 0826518559)(https://www.fbi.gov/investigate/civil-rights/hate-crimes)

Since the 2000s, SPLC's classification and litigating of hate groups (and by definition: organizations that, in its own assessment, "attack or malign an entire class of people, typically for their immutable characteristics") and extremists have often been described as authoritative. The SPLC has been subject for various criticism from others which argue that some of the SPLC's listings are over broad, politically charged or unwarranted. They are also often cited during academic and media coverage of such groups and related issues.

Here are 4 articles to showcase the overreaches of the SPLC:

While the SPLC enlisted itself into honorary tactics in the 1970s, today is not the same case in my opinion. Hopefully after reading what you just read, you're in the same boat as me. We are now officially talking about an organization with enough power to silence people's speech and to cut off payment channels by adding you to their "list" of hate groups. Even more moderate people like Robert Spencer are being targeted. One may not believe in Robert Spencer's tactics or message, one can at least understand that this is plain wrong. People need to have the right to their own freedom of speech, provided that it is not a call-to-action towards harming individuals. Robert Spencer, you are the example. The icon to show of what is to come if nothing is done now. This is the new "hate group" now. The unspoken hate group of anti-tolerance. People need to be aware of this. Take the time and link people this article.